134 Afghan troops were forced to flee across the border under attack from the Taliban. 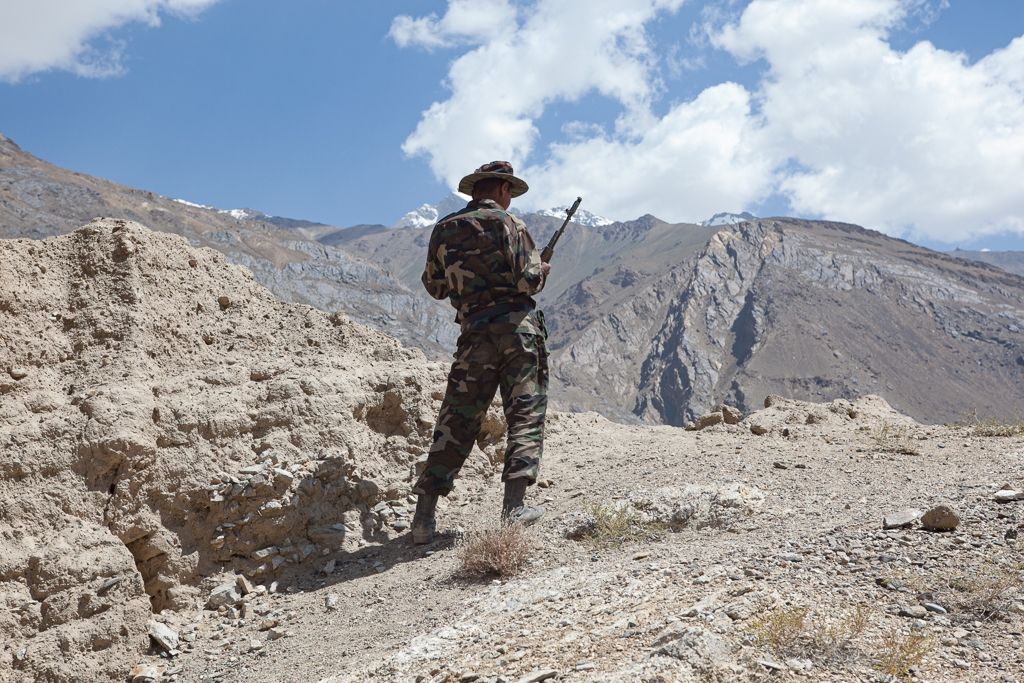 Tajik officials say they have bolstered security on the long border with Afghanistan. (Eurasianet file photo)

Tajikistan’s security services have confirmed that more than 130 Afghan troops were forced to flee across the border in the face of an overwhelming Taliban onslaught, sparking fears that spiraling instability in Afghanistan is already putting pressure on neighboring nations.

The State Committee for National Security, or GKNB, which includes the border service within its purview, said in a statement released late June 22 that the Taliban assault focused on the Shir Khan Bandar border crossing, which is linked to Tajikistan by a U.S.-funded bridge.

“As a result of the armed clash, which lasted until 9 a.m. on June 22, 134 Afghan government troops unable to withstand the offensive were forced to retreat … into the territory of Tajikistan,” the GKNB said.

Tajik security officials said they admitted the fleeing troops out of a sense of “humanism and good neighborliness,” although it is unclear that they had much choice.

Around 100 Afghan troops are said to have been killed or captured around the Shir Khan Bandar crossing. And this area is only one of many bordering Tajikistan that have seen unrest in the last couple of weeks. The GKNB named five districts in the Takhar province and another three in the Kunduz province, both of which border Tajikistan, that it said have fallen under Taliban control, along with a pair of border checkpoints.

Taliban success extend across other parts of Afghanistan too. UN special envoy Deborah Lyons this week warned of “dire scenarios” as she told the UN Security Council of how more than 50 of the country’s 370 districts have been seized from government troops.

The Taliban appeared to have been emboldened to further their momentum following the announced gradual drawdown of the roughly 3,000 U.S. troops that remained in Afghanistan in May. In April, U.S. President Joe Biden said that a pullout would last until September 11 – a timeframe that he argued did not constitute a “hasty rush to the exit.”

There are some clues, though, that warring between the Afghan army and militant forces could spiral into something even more generalized. Kabul-based outlet ToloNews carried a report from northern Afghanistan on June 23 talking about how the civilian population is also increasingly taking up arms to resist Taliban incursions.

The alarm has been rung inside Tajikistan about the possible fallout from unrest in Afghanistan by the head of the Gorno-Badakhshan Autonomous Region, or GBAO, who spoke at a meeting with law enforcement and military officials on June 21 about the need to strengthen border defenses.

The lack of security in Afghanistan was a signal to Tajikistan that internal stability needed to be protected, Yodgor Faizov was cited as saying by the Khovar state news agency.

Tajikistan should set aside accommodation and accumulate fuel, food, clothing, and transportation facilities in anticipation of a possible refugee crisis, Faizov said. In a subsequent interview to Asia-Plus news website, Faizov said that Tajikistan was prepared to accept more than 10,000 Afghans seeking refuge.

In light of how strictly statements to the press by senior Tajik officials are policed by the authorities, it is safe to assume Faizov’s remarks are broadly in line with positions held by the central government in Dushanbe.

On June 23, Faizov followed up his earlier remarks to say that Tajik defenses had been bolstered in the GBAO.

“The GBAO has an extensive border with Afghanistan, so it is necessary to routinely bolster the activities of territorial defenses [units], so that its members are in a state of permanent readiness,” he was quoted as saying by TASS news agency. “Defense of the border has been strengthened. Border guards are in a state of heightened readiness.”

Although most of the provinces known have been seized by the Taliban are closer to the southwestern areas of Tajikistan, TOLONews has reported that at least one district in Afghanistan's Badakhshan province – Khash – has fallen.

Speaking to Dushanbe-based news website Avesta, Rahmatillo Abdulloyev, whom the outlet described as an expert on Afghanistan, sought to soothe anxieties, saying that Tajikistan itself was at negligible risk of Taliban incursions.

“We should not expect serious consequences. There will of course be consequences of a local character. But so far, all the Taliban needs is to shore up their positions in the north,” Abdulloyev said.

With its 1,344 kilometers of shared border with Afghanistan, Tajikistan is the most exposed among former Soviet Central Asia states to potential overspill from unrest.

Regional security is accordingly top of the agenda at a meeting in Dushanbe this week of security officials from members states of the Moscow- and Beijing-led Shanghai Cooperation Organization. Russia has a strong military presence in Tajikistan, although it is not directly responsible, as it had been in the past, for security along the border.

Russian President Vladimir Putin’s spokesman said that Moscow was concerned at how the situation was evolving in Afghanistan against the backdrop of U.S. withdrawal.

“The development of the situation in Afghanistan as American and other military forces are withdrawn from the country is something to which we are paying close attention,” the spokesman, Dmitry Peskov, was quoted as saying by TASS news agency. “Tajikistan is a very close partner state to us. And so, the emergence of a new hotbed of tension and threat is what worries us.”

*Updated June 23 to include Faizov's follow-up and comments from Peskov.