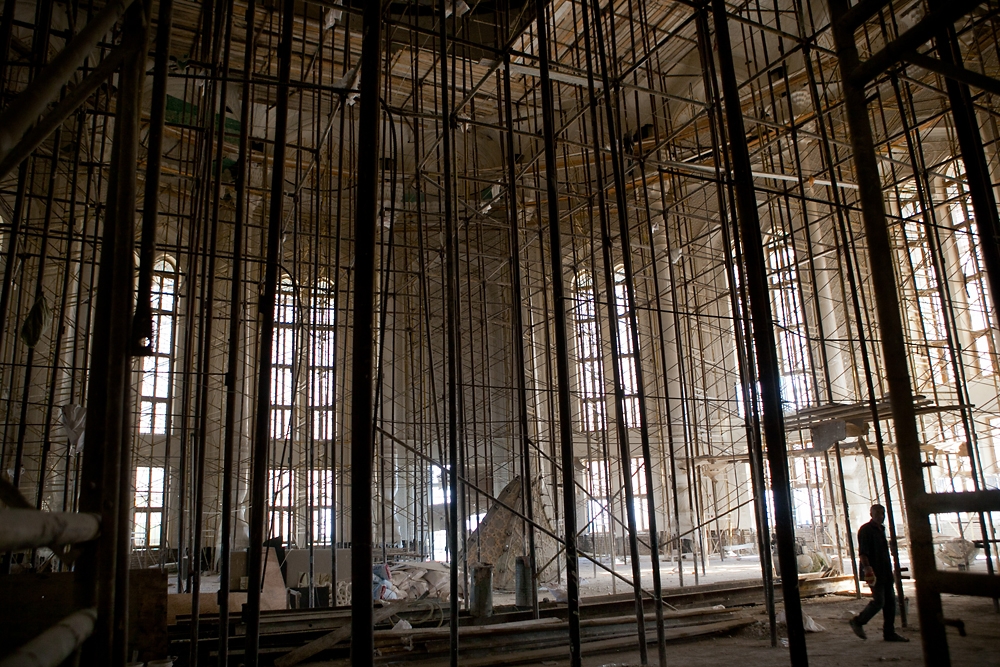 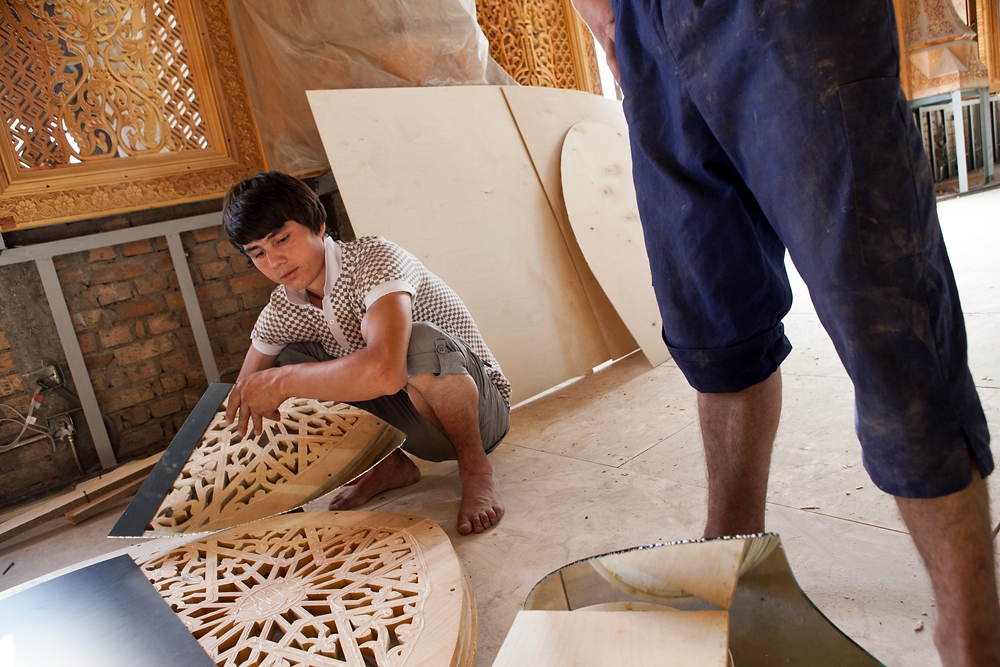 Woodworkers staple mirrors to the back of a lattice frame. (Photo: David Trilling) 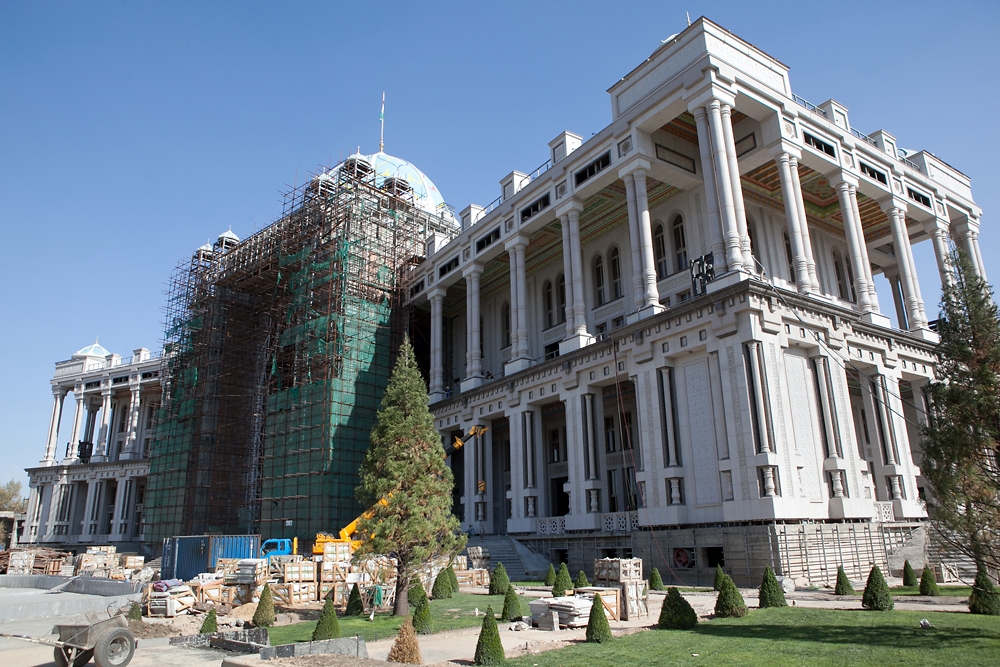 Western officials estimate the construction of the teahouse at $60 million. (Photo: David Trilling) 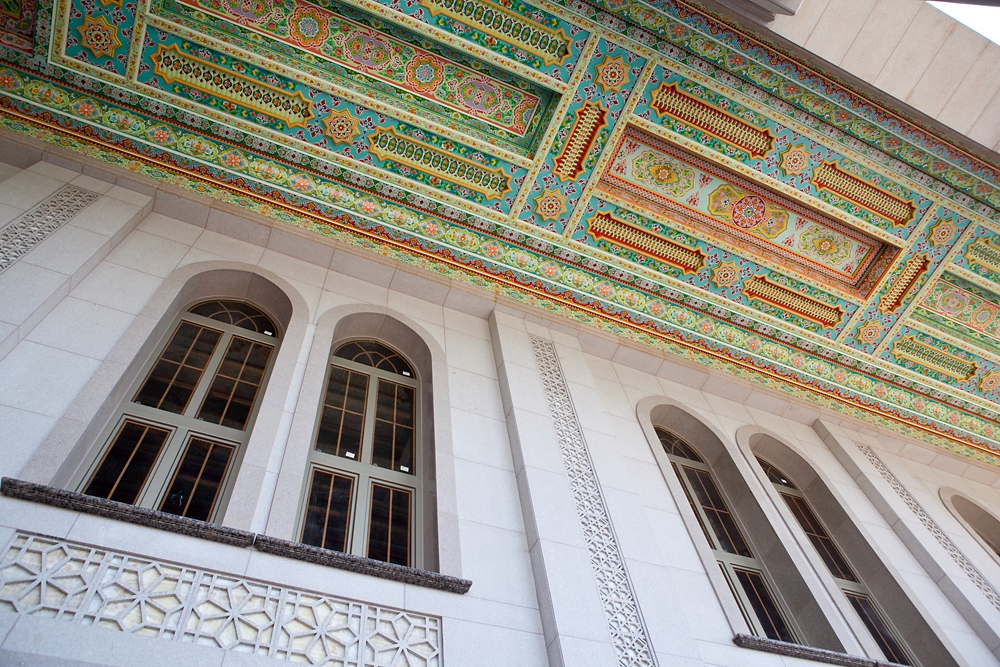 Several outside ceilings are being painted. (Photo: David Trilling) 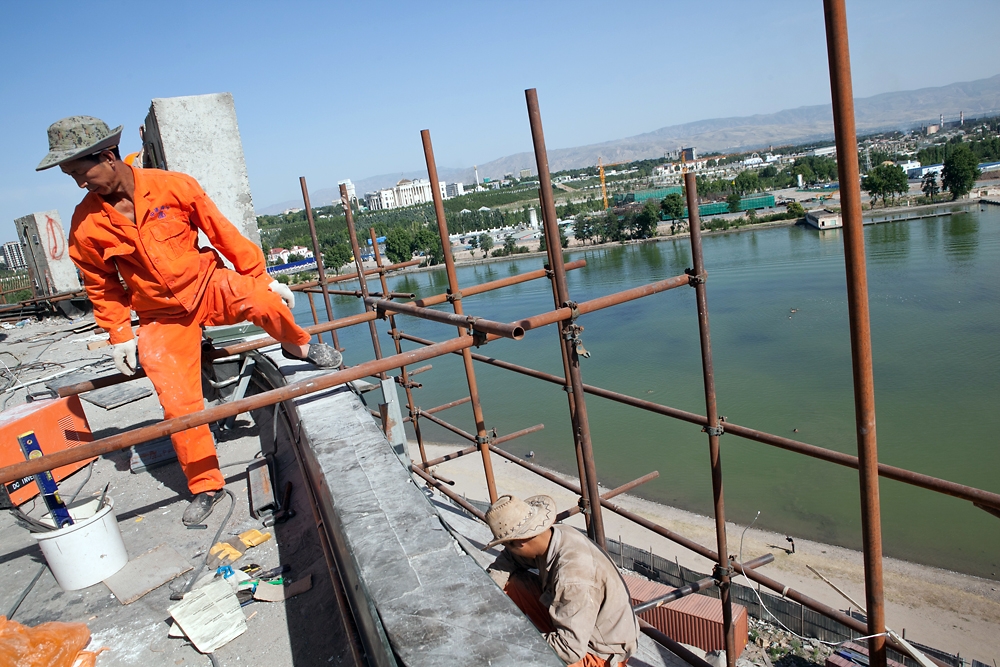 The teahouse is being built on the shore of Komsomol Lake in Dushanbe. (Photo: David Trilling) 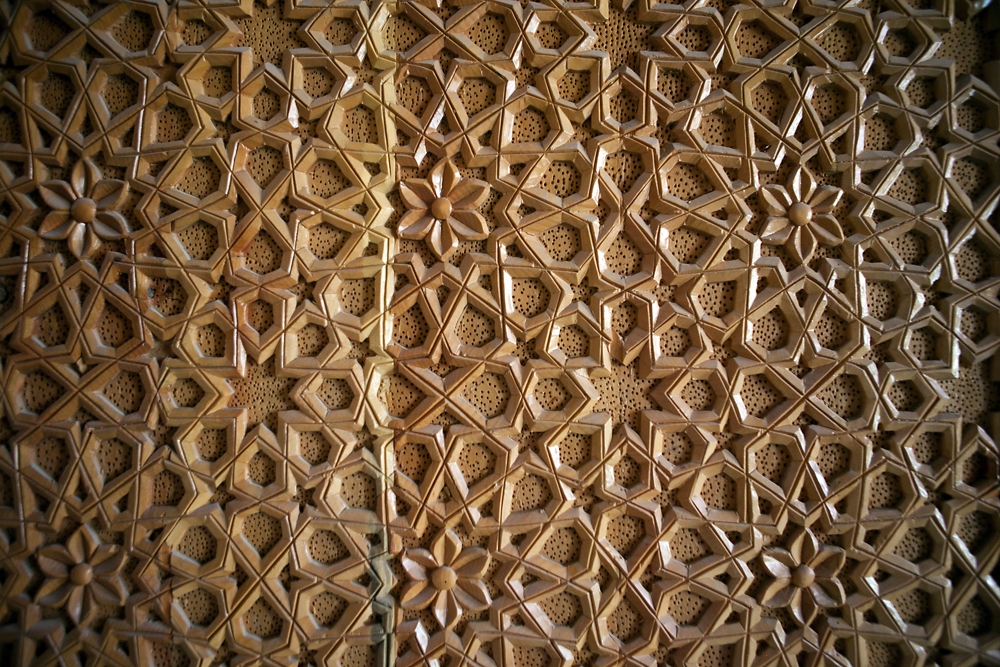 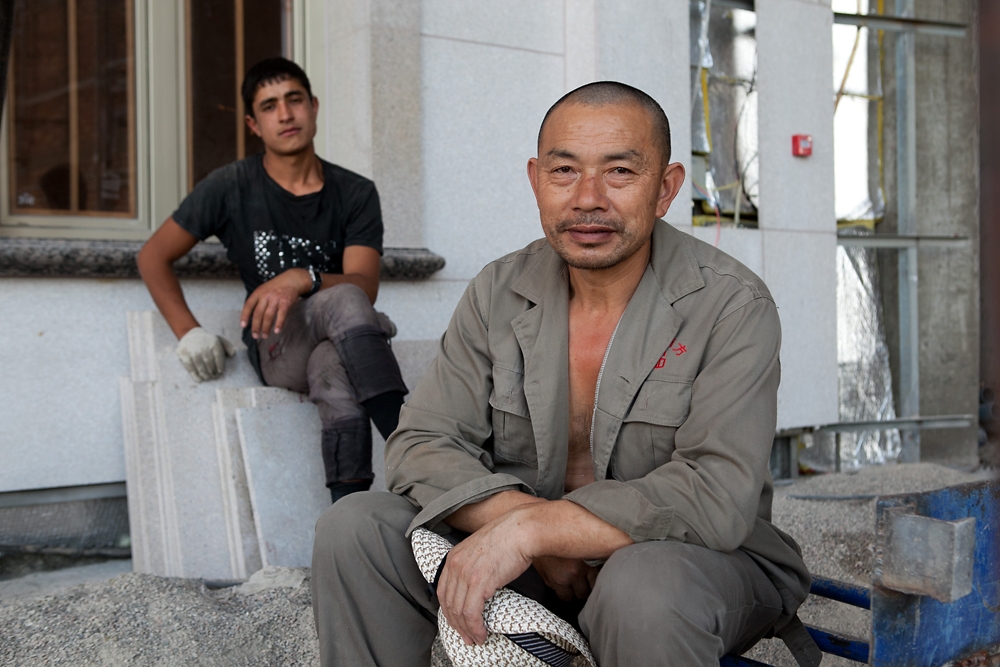 A construction foreman estimated half the 400 workers are Chinese. (Photo: David Trilling) 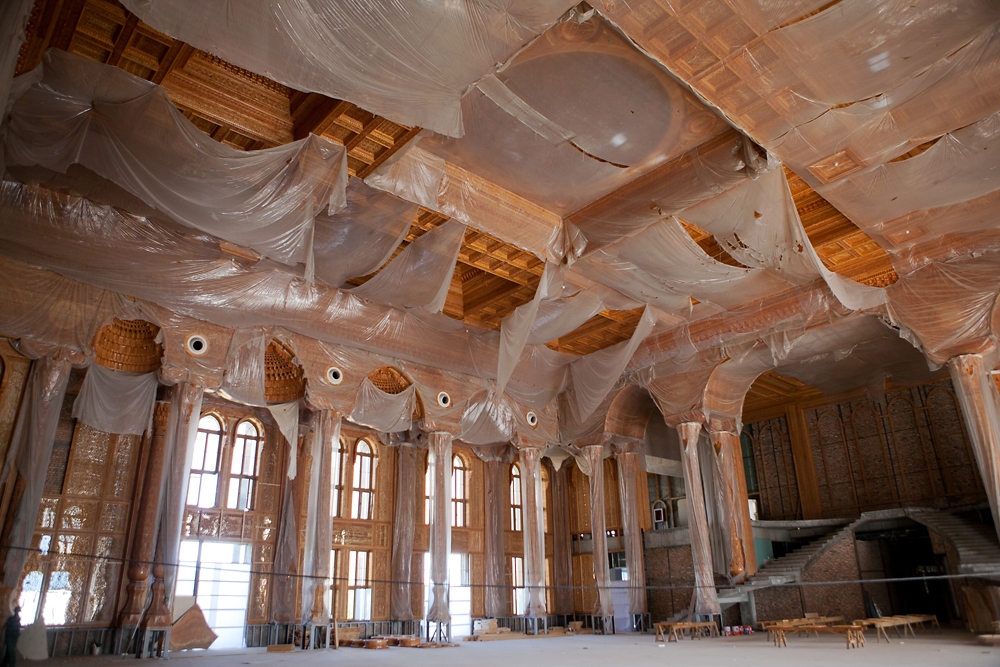 Details to the walls and ceilings are being finished in "the president's dining room." (Photo: David Trilling) 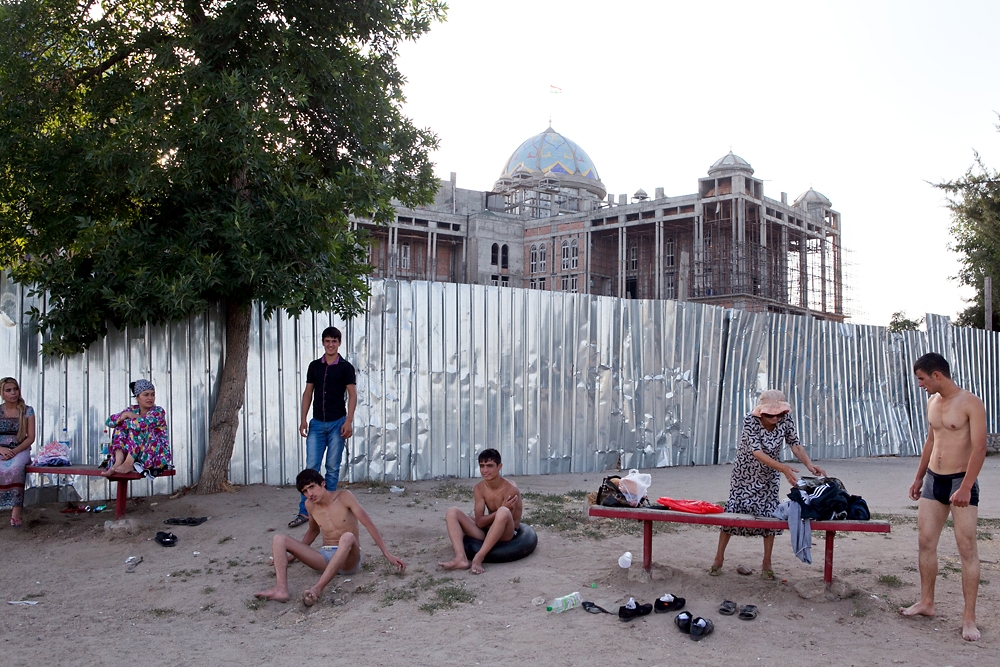 Behind bathers at Komsomol Lake, the shell of the teahouse undergoes construction in summer 2012. (Photo: David Trilling) 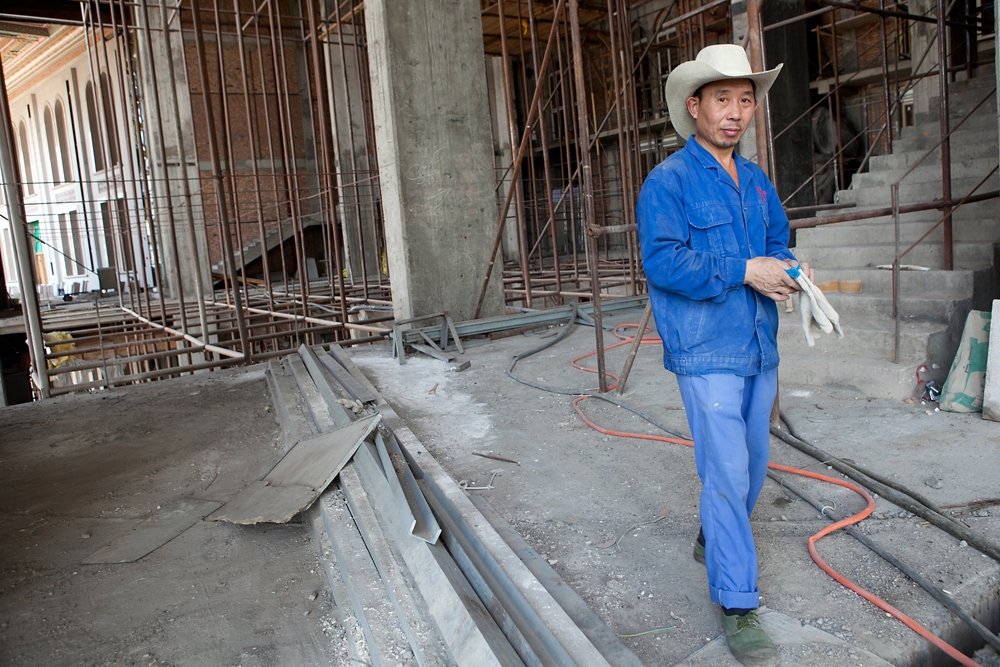 The teahouse will include a billiard hall and giant plaster waterfall. (Photo: David Trilling) 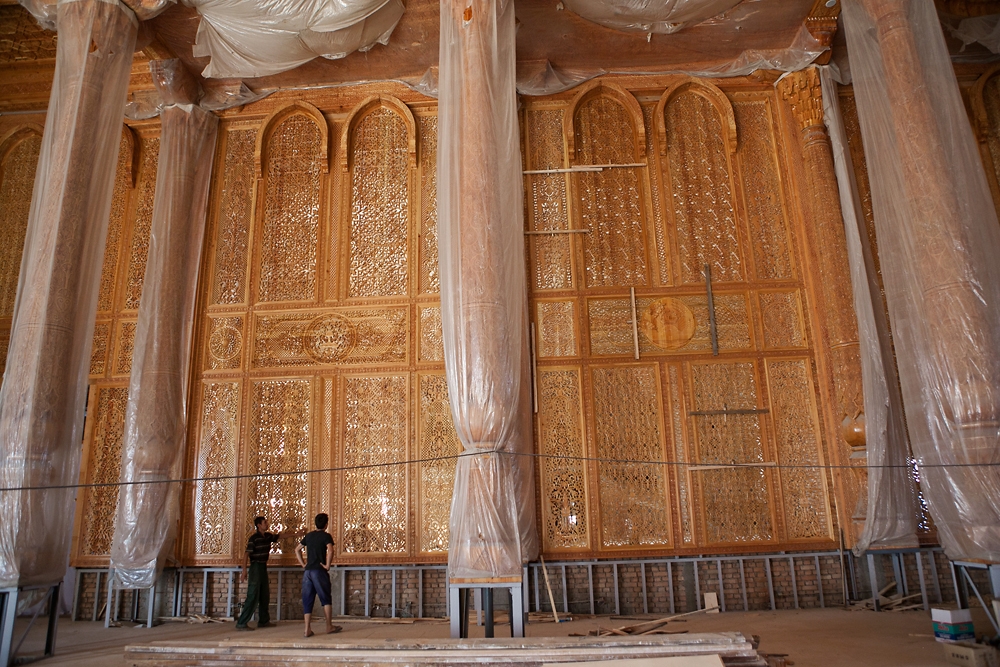 The world’s largest teahouse is expected to be open by Tajikistan’s Independence Day this September. (Photo: David Trilling) 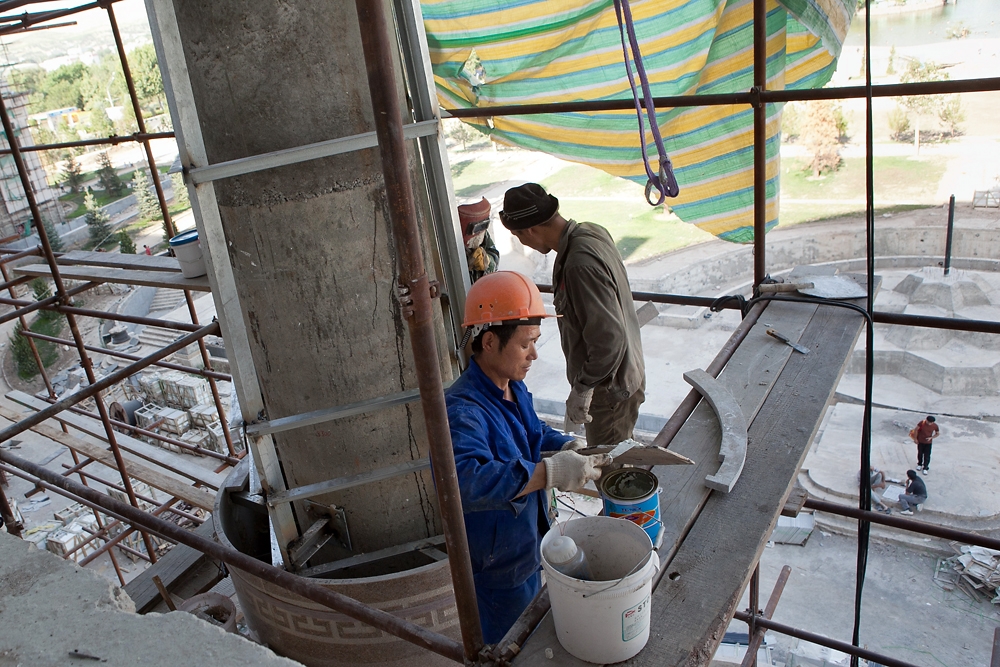 A foreman said the quality of the Chinese work is better than anything that can be sourced locally. (Photo: David Trilling)
prev
next

Step past the giant plaster waterfall taking shape in the foyer, skirt the billiard hall with ornate damask wallpaper, and a splendid ballroom opens up.

“This is the president’s dining room,” a foreman says proudly, pointing out the intricate wood carvings covering each wall.

For the past several years a hulking, multi-domed structure has been rising on the edge of Dushanbe’s Komsomol Lake, wedged between the Ferris wheel and Tajikistan’s poshest hotel, the Hyatt.

For many Tajiks, at least publicly, all these world records are collectively a source of pride.

In adjacent Komsomol Park, where Dushanbintsi can enjoy a swim or a game of billiards before tucking into some shashlik and beer, passersby generally say they think the structure is beautiful, though several expect it will not be open to the public, much like the $300-million Palace of the Nation across the lake, or a storied tea house in Dangara, President Imomali Rahmon’s hometown.

Along with the flagpole, the teahouse will help Dushanbe be “known all over the world,” says a college student.

Rahmon has been on a building spree in recent years, refashioning downtown Dushanbe into a sparkling panorama of palaces and municipal buildings – such as a new national museum and the region’s largest library (largely devoid of books). State television dutifully praises the structures while only a few question the expense.

Western officials estimate the teahouse is costing $60 million – equivalent to about 1 percent of the GDP and 33 percent more than what the US government’s aid agency, USAID, spent in Tajikistan in fiscal year 2012. But the teahouse and other vanity projects in the Tajik capital are said to be financed by the country’s few large companies to curry favor with Rahmon.

Of the 400 or so workers, the foreman said, half are Chinese nationals. That could be a controversial admission in a country as impoverished as Tajikistan. Already, over 1 million people – perhaps half of working-age males – have gone abroad looking for work, mostly to Russia. But the foreman insisted the quality of the Chinese work is better than anything that can be sourced locally. And, at times, it seems there are few Tajiks left to mind.