Tajikistan, China to hold another joint military drill in Pamirs

Dushanbe appears intent on outsourcing its security needs to Beijing. 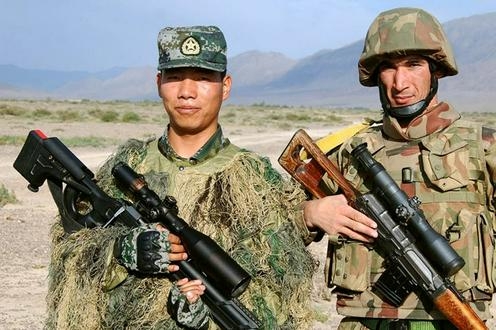 A Chinese and Tajik soldier posing for a photo. (Photo: Tajikistan Defense Ministry)

Tajikistan will later this month conduct another round of joint military exercises in its high-altitude Pamirs region with China’s armed forces, lending weight to suspicions that Dushanbe is increasingly outsourcing its security needs to Beijing.

The exercises will take place along the Afghan border, in the Ishkashim district of the Gorno-Badakhshan Autonomous Region, or GBAO.

A Tajik paratrooper battalion and a company of the Chinese People’s Liberation Army will take part in the drill, a source in Tajikistan’s Defense Ministry told Asia-Plus newspaper on July 9.

Aviation, armored vehicles, artillery and firearms will be deployed during the exercise, which will reportedly simulate a coordinated response to an incursion of militants from Afghanistan through Tajikistan and into China.

A similar drill, involving seemingly the same number of troops and types of equipment, took place in October 2016.

China’s role in helping Tajikistan secure its border has been growing steadily over the past few years.

One month before the 2016 exercise, the Tajik government announced that China would build 11 border guard posts along the Afghan border and a border training center. Last month, the Wall Street Journal cited an unnamed Tajik official as saying that China had in fact agreed to “refurbish or build up to 30 to 40 guard posts along the country’s border with Afghanistan.”

But there is also mounting evidence that China has its own secretive, semi-permanent military presence inside Tajikistan.

The Washington Post in February bolstered an earlier finding by the International Crisis Group, or ICG, with an article detailing the existence of a Chinese security facility on the furthest easternmost point of the Afghan-Tajik frontier. Photos taken by a Washington Post reporter and satellite images showed a complex of around two dozen two-story buildings and lookout towers.

Personnel spotted by the journalist were seen to be wearing the collar insignia of a unit from Xinjiang, the Chinese territory neighboring Tajikistan. One soldier told the Washington Post reporter that the troops had been in the location for “three, four years.” The ICG researcher cited officials in the Pamirs and in Dushanbe as saying that the facility was a “joint counter-terrorism center” that housed both Chinese and Tajik troops.

The Wall Street Journal went even further than claiming just the existence of remote, solitary border facility and cited its source, a Tajik official, as saying that Chinese troops had replaced Tajik forces along “large swathes” of the border.

“There are parts of the country where the Chinese have taken over border control completely,” the Journal’s source said. “They patrol on their own, in their own vehicles.”

It has not been possible to independently verify those claims and the Tajik government does not, as a matter of course, volunteer public comment on matters of national security, even to confirm or deny such reports.

Russia, which has for many years acted as Tajikistan’s paramount security guarantor, appears to be adopting an equanimous stance over this incursion into what it has long perceived as its sphere of influence. This may be because China would have to go much further before it could get anywhere near matching the large Russian contingent in Tajikistan, which is dotted across a handful of installations across the Central Asian nation.