The Foreign Ministry and Chinese Embassy intervened to resolve the impasse. 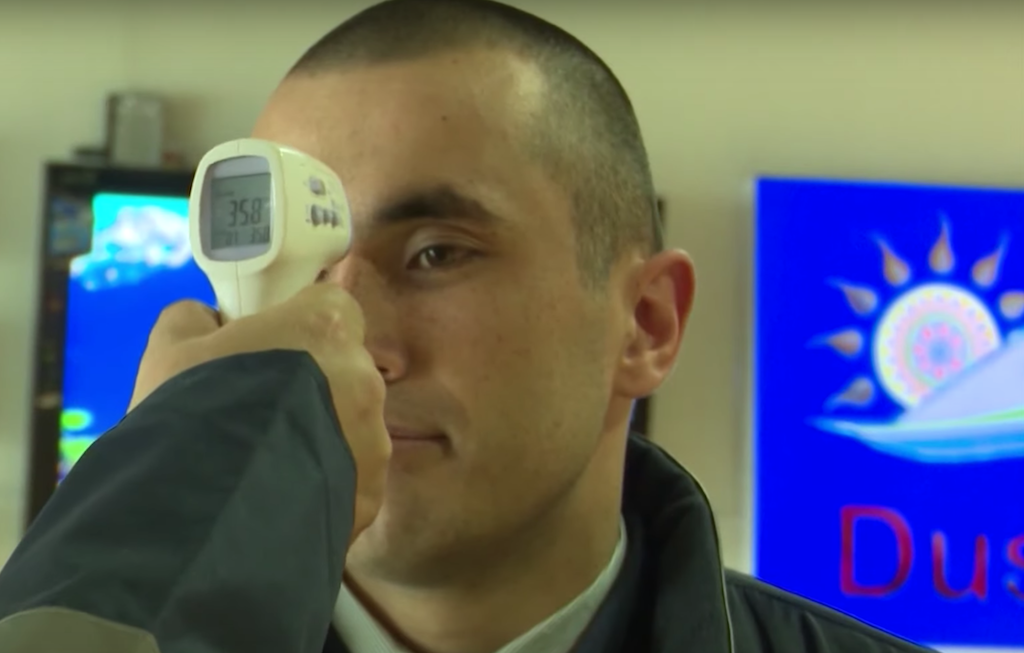 Man being checked for possible indications of infection on arrival at Dushanbe airport. (Photo: Screengrab from state TV)

A group of Chinese diplomats was last week reportedly held at Tajikistan’s main international airport for up to 18 hours after they declined to submit to quarantine procedures intended to stem the spread of the coronavirus.

Prague-based website Akhbor reported on February 9 that the impasse was only resolved after the Foreign Ministry and the Chinese Embassy in Dushanbe got involved.

Tajik health authorities have stepped up preventative measures in recent weeks as part of their efforts to contain a global epidemic that has, according to authorities in Beijing, infected more than 42,000 people in China alone. World Health Organization director-general Tedros Adhanom Ghebreyesu has described coronavirus as a “very grave threat for the rest of the world.”

The Tajik Health Ministry requires anybody traveling from China to remain in quarantine for a period of 14 days. There are quarantine centers in all the country’s regions and they are currently holding a total of around 400 people. There have been no confirmed cases of the illness in Tajikistan.

These kinds of policies have generated approval from the public, who have hailed officials for sticking to their line even in the case of Chinese diplomats. Beijing is fast emerging as Tajikistan’s most important economic partner, and it could have been expected that Dushanbe might make concessions to avoid provoking offense. Tajik authorities have made some accommodations by reserving a separate facility, in the scenic Varzob gorge, just outside Dushanbe, to accommodate diplomatic personnel needing to submit to quarantine procedures.

“I am glad that the Tajik authorities insisted on their position that the diplomats should have to go through quarantine,” Bakhtiyor Safarov commented on his Facebook page.

The coronavirus epidemic may not have claimed any victims in Tajikistan, but it is spreading anxiety, as it has elsewhere in the region. Many people in Dushanbe have taken to wearing surgical masks, which have gone up in price from the equivalent of $0.05 to $0.20 since the outbreak first hit international headlines. Many pharmacies have run out of supplies.

Authorities have said that in the interests of security, they have temporarily halted the delivery of food goods from China. Flights between the countries have been suspended since January 23.

On February 10, President Emomali Rahmon ordered privately owned Somon Air to arrange charter flights to evacuate Tajik nationals from the Chinese city of Wuhan, where the epidemic is believed to have begun. Officials say 54 Tajiks nationals currently reside in the city.