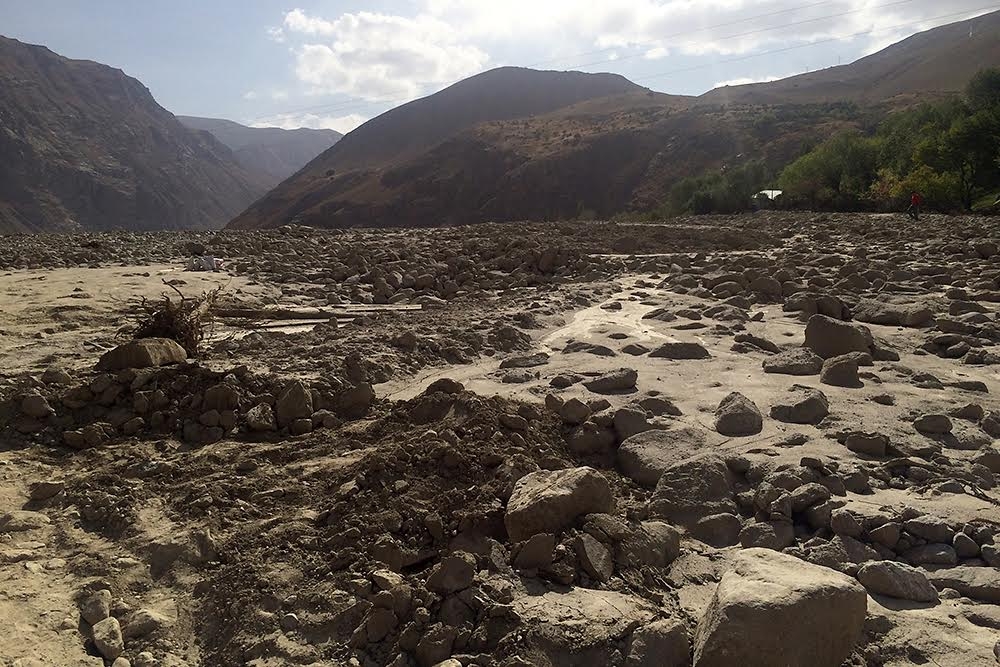 A flash flood carrying tons of mud and debris tore down this valley, washing away the homes and belongings of around 80 families in the Tajik village of Barsem. Abnormal weather patterns, possibly due to climate change, and the dangerous consequences are highlighting how many rural communities are ill-equipped to deal with the climate chaos. (Photo: EurasiaNet)

One day in mid-July, Nazim brought a truckload of clothes and food to his home in Barsem, a village in the Pamir Mountains of east Tajikistan, in preparation for his wedding later in the summer.

The following afternoon, on July 16, a flash flood sent mud and debris tearing through Barsem, carrying away Nazim’s home along with those of around 80 other families.

“We sent a whole Kamaz [truck] full of things for the wedding. We even had some money there,” said Nazim, lying on his side on the floor of a tent in a camp created to house former residents of Barsem. “Everything was washed away.”

Extensive flooding across Tajikistan this summer has highlighted a need to implement measures that can better protect at-risk communities. Many mountain villages are ill-equipped to deal with the climate chaos that scientists believe is awaiting as temperatures rise and glaciers in Central Asia melt.

Meteorological authorities in Tajikistan say summer temperatures have been anomalously high for the best part of the last decade. Barsem residents spoke in unison about the intensity and duration of the weather in early July, leading to a confluence of events that resulted in the flash flooding.

The village lies at the base of a gully through which a rapid, narrow stream of melted snow rushes into the Gund River. The location makes the village vulnerable, but with arable land a precious commodity in the Pamirs, settlers often cannot be selective as to where they situate their homes.

Snowfall was especially heavy this year, according to Barsem residents, making the subsequent intense melt-off particularly dangerous. Shepherds returning from the mountains on July 15 reported seeing worrying cracks in piled-up snow, but that gave little idea of what was to come.

“We never imagined anything like this could happen,” said Shakhar Kurbonbekov, the chairman of the village council. “What I saw with my own eyes was something that nobody should ever have to see.”

The torrents of water, debris and mud lasted more than a week. The tarmac road that ran past Barsem was washed away and was still being tentatively rebuilt as a rock-strewn dusty track in mid-September.

Displaced villagers who were fortunate to have relatives living nearby moved into their homes. Others took to the higher reaches of the Barsem mountainside.

“For several hours, we settled in a place not far from the disaster and waited for it to end,” said villager Tojigul Korbonova.

A field belonging to Korbonova that once hung over the gully is gone. Cracks in the soil show where the next section is ready to fall away. One building on her plot is teetering precariously on the edge.

“For 16 days we lived in the mountains, and then we spent another five days with relatives,” Korbonova said. “How we are going to live now, I cannot say. I don’t know what the authorities make of our fate,” she said.

Some whose houses were unaffected remained even as the disaster was unfolding, although they had no electricity and drinking water for several weeks. A United Nations Rapid Emergency Assessment and Coordination Team estimated that more than 80 percent of communities in the Gorno-Badakhshan Autonomous Region were left without power in the days following the flooding.

Because they were cut off from roads coming in from the provincial capital, Khorog, holdout residents rigged a basket on a wire strung across the floodwater, which they used to bring in basic food items and water. A bridge linking what remains of the village to the road under construction was installed in the middle of September. Before that, getting in and out of the village required rowing a boat across the artificial pool created by debris and floodwater.

Much of the work being done in Tajikistan’s Pamirs to mitigate the fallout from such events is being done by Focus Humanitarian Assistance, which is part of the Aga Khan Development Network. Barsem villagers said readiness programs administered by Focus were a factor in preventing any fatalities during the flooding.

The scale of destruction prompted authorities to relocate the hundreds of villagers. On a ledge cut into the mountains about 20 minutes down the road, a new settlement is being erected on orders from President Emomali Rahmon. The site was a former military target practice range, and spent cartridges of various calibers still litter the area.

As dozens of families, including Nazim’s, who asked that his surname not to be published, await completion of their houses, they live in tents donated by international relief organizations and governments. Sacks of flour emblazoned with the words “Gift of the Russian Federation,” along with rice and pasta were distributed in the early days, helping people avert hunger.

One notable difference between the new settlement and the old is that there is limited space for people to grow their own crops. And with no river in the immediate vicinity, irrigation water will need to be piped in for whatever vegetable patches people do manage to build.

Back in Barsem, the village head, Kurbonbekov, still holds out hope that everything can be returned to the way it was before. “I can’t bear to look at this, we had such a wonderful village,” he said, surveying the devastated valley. “When the spring comes, we will begin planting things again.”