Critics of Faroz say it has grown only thanks to its owner's family ties. 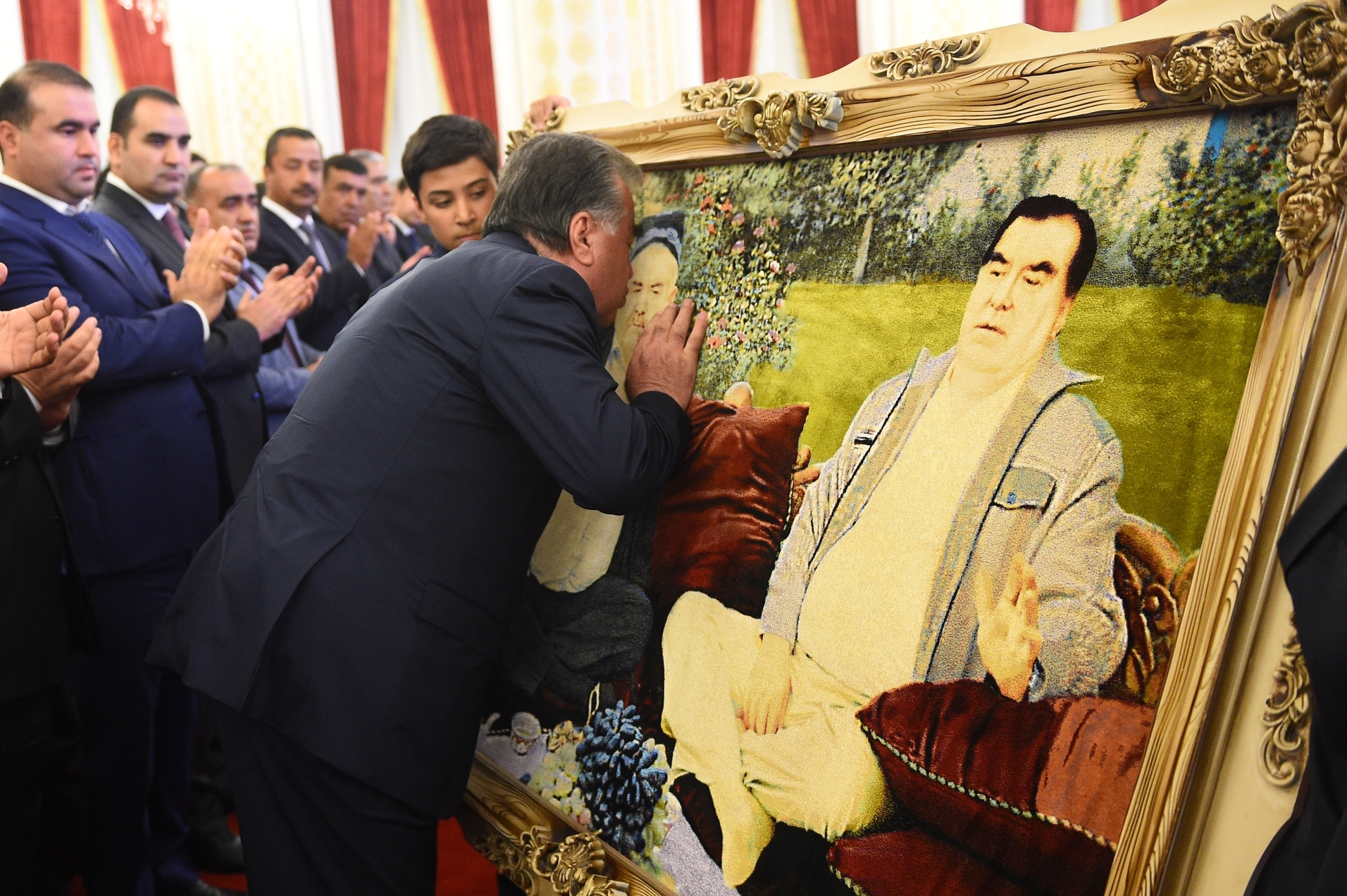 Carpet comforts: President Rahmon kissing a portrait of his late brother and himself that was produced by carpet-weavers. Sohibov can be seen in this photo at far left. (Photo: Presidential administration)

A large company in Tajikistan owned by a son-in-law of the president has announced it is set for liquidation, despite its quasi-monopolistic grip over lucrative sectors of the economy.

Faroz, which belongs to Shamsullo Sohibov, initially offered no explanation for its decision, which was made public on September 13.

But a spokeswoman for the company told RFE/RL’s Tajik service, Radio Ozodi, in an interview, that liquidation had been precipitated by the welter of public criticism of the company’s activities. It was unclear that if spokeswoman’s remarks reflected actual thinking among the leadership at Faroz, however.

So far, there are more questions than answers.

Asia-Plus news website cited sources at Faroz as saying the company has filed a letter with the tax committee to state that it and all its subsidiaries are to be wound down. Prague-based website Akhbor, meanwhile, said it had obtained a copy of the letter itself and that this says that only the company’s fuel import business is being liquidated.

“Tajik companies are buying fuel directly from the producers, cutting out the middlemen. Also, prices for fuel have gone up, so the company has lost competitiveness on the local market,” Faroz general director Azamat Qosimov is quoted as saying in the letter.

Tax registry data shows that there are around 60 different entities registered within the Faroz holding company. These include banking interests, a chain of filling stations, medical services laboratories, mineral extraction companies, several bazaars in Dushanbe, the Cambridge Academy, an elite private school that opened last September, and the Safed-Dara skiing complex.

The latest addition to the Faroz business empire is a giant waterpark in Dushanbe, which opened its doors on August 30. The builders of the waterpark, which was developed jointly with Turkish company Polin Waterparks, say it is the largest of its kind anywhere in the region. President Emomali Rahmon, father of Sohibov’s wife, Rukhshona, attended the opening.

Faroz detractors say it is only through family connections that Sohibov has been able to grow the company into such a major player. Some entrepreneurs based outside the country have accused Sohibov of strong-arming them out of their businesses.

Faroz spokeswoman Dilorom Rahimova grumbled to Radio Ozodi that it was the sniping of critics that led to the decision on liquidation.

“Faroz is trying to improve the country. No matter what sector it gets involved in, there is always development,” Rahimova argued. “For example, take the Safed-Dara [skiing complex]. Have you seen how well that turned out? But instead of being thanked, Faroz constantly faces criticism.”

Such reasoning will draw exasperated guffaws. Independent media has been all but destroyed at the hands of a repressive government. Criticism of the ruling family and its business interests is out-of-bounds.

Tajik finance experts familiar with Faroz’s business activities agree that there may indeed be a reputational dimension to what is happening, however.

“It is just that the presidential family wants to get rid of a company that has become a source of embarrassment,” one such expert told Eurasianet on condition of anonymity for fear of potential reprisals. “That is, they will either rebrand, or all the companies that operated under Faroz will begin to operate independently and self-finance. That is all.”

Whatever is happening to Faroz is certainly not indicative of tensions within the ruling family. Sohibov looks like Rahmon’s favorite son-in-law of late.

Last month, Rahmon awarded Sohibov the Order of Sharaf (Glory), purportedly for his contributions to the fields of science and culture. And on September 12, when Rahmon was in his native town of Danghara to open, among other things, a museum dedicated to himself, he was joined by Sohibov.