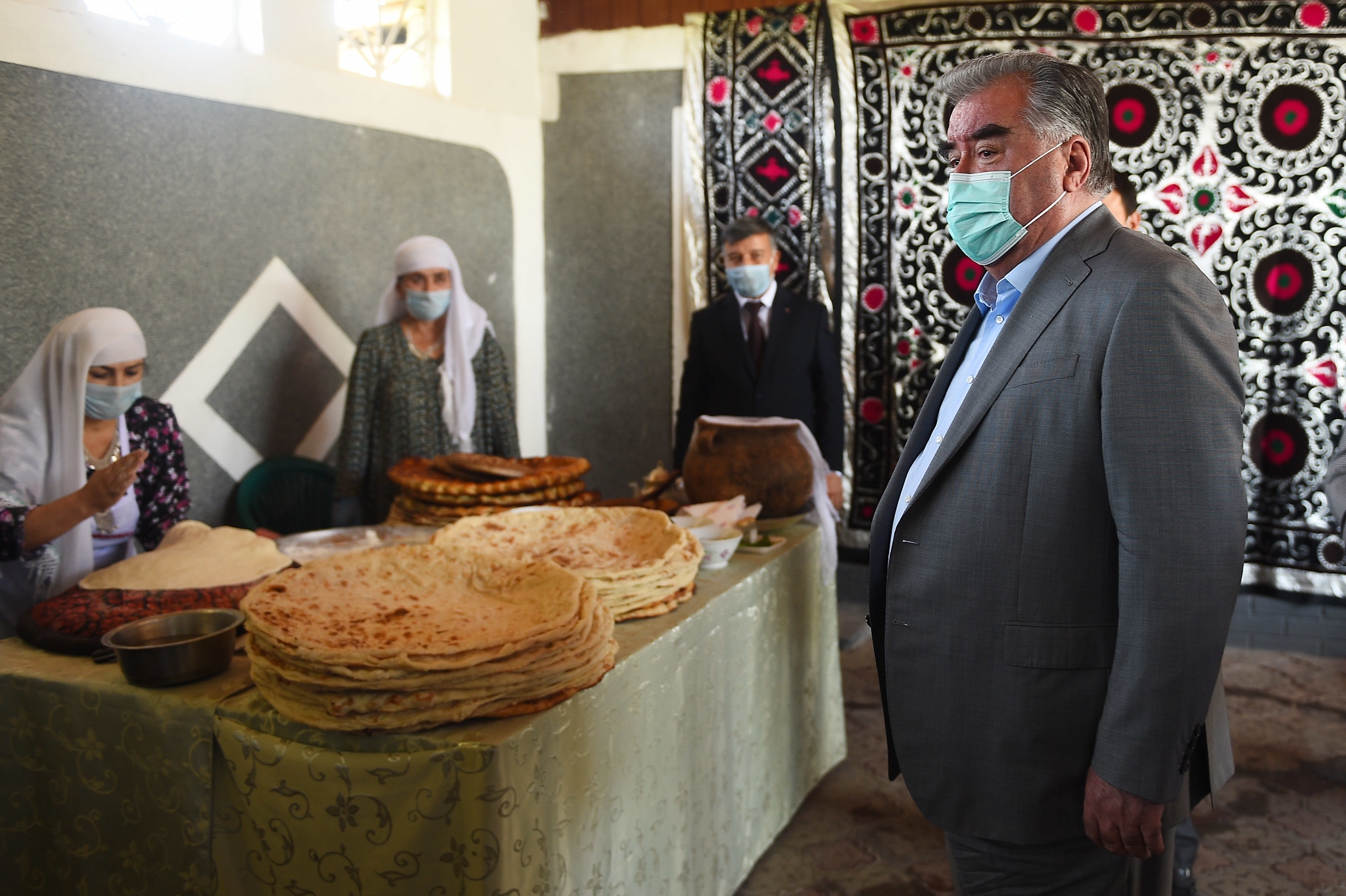 Asking for bread: Rahmon at a recent visit to a bakery. (Photo: Presidential administration)

Before the coronavirus pandemic struck, Tajikistan had to plead and wheedle for any grant money and loans that came its way.

Since the crisis arrived, however, the government has received at least $300 million in grants and credit and is expecting another $70 million or so.

Jamoliddin Nuraliyev, first deputy head of the National Bank of Tajikistan, or NBT, said on July 27 that the anticipated $52.5 million from the Asian Development Bank and the $16 million pledged by the World Bank would be used for “development of the country's economy and banking system."

The bulk of the money paid out earlier – just under $190 million – came in the form of a loan from the International Monetary Fund, which has previously evinced resistance toward making such transfers because of the Tajik government’s lack of transparency and accountability. Another $50 million apiece came as grants from the less squeamish Asian Development Bank and the Eurasian Development Bank. The latter bank is based in Almaty and was set up by Russia and Kazakhstan in the mid-2000s.

Money from the ADB and IMF is specifically intended to cover the anticipated plunge in revenues for the Tajik government in light of the sharp contraction of remittances from labor migrants this year. On July 22, NBT chairman Jamshed Nurmuhammadzoda said labor migrants in Russia had sent home $999 million from January to June, which represents a $174 million drop on the same period the year before.

The sudden injection of foreign cash may help Dushanbe weather the worst of what is coming, but it will set back what already looked like a highly unrealistic agenda of generating future growth on the back on foreign assistance.

Last June, Zavqi Zavqizoda, first deputy minister of economic development and trade, summoned a meeting of international development agencies to explain that the government was looking for about $400 million – an amount equivalent to around one-twentieth of Tajikistan’s gross domestic product – to fund a hazily mapped-out vision to overhaul the economy and ward off trouble in future. While his government has implored for these large sums, though, President Emomali Rahmon has done nothing to steer his nation away from the untrammeled corruption and cronyism that has kept investors, and even many donors, at bay.

The experience of EU aid is exemplary of recent trends. Brussels had in its plans for the period 2014-2020 intended to grant Dushanbe around 250 million euros ($284 million) in financial aid. In the end, Tajik failure to credibly follow through with a governance and budget management reform agenda meant that around 100 million euros was never given, an EU source told Eurasianet last year.

Rahmon proved more persuasive in May, when he sent a letter to the IMF in which he outlined the risks posed to the economy by the shrinkage of remittances.

“The decline in remittances is likely to last for several months, leading to a sharp decline in consumption and an increase in unemployment, as well as pressure on the foreign exchange market,” the president said in the letter.

There is already evidence, however, that money earmarked for coping with the COVID-19 crisis is not being spent accountably and that sizable chunks of it will disappear into nebulous rabbit holes.

The World Bank, for example, said in early April it was giving Tajikistan $11.3 million to pay for the establishment of around 100 fully equipped Intensive Care Unit places and to provide cash transfers to desperately needy families. Only several weeks later did the government finally announce that cash transfers of 116 somoni ($11) – enough to buy a little more than two kilos of beef at the bazaar – would start to be made to eligible family units every quarter, starting from July. It added, moreover, that these payments would come out of the state budget, and it made no allusion to whether the funds had originated with the World Bank.