Officials insist only armed men have been killed, but chatter on social media describes at least some of the fatalities as civilians. 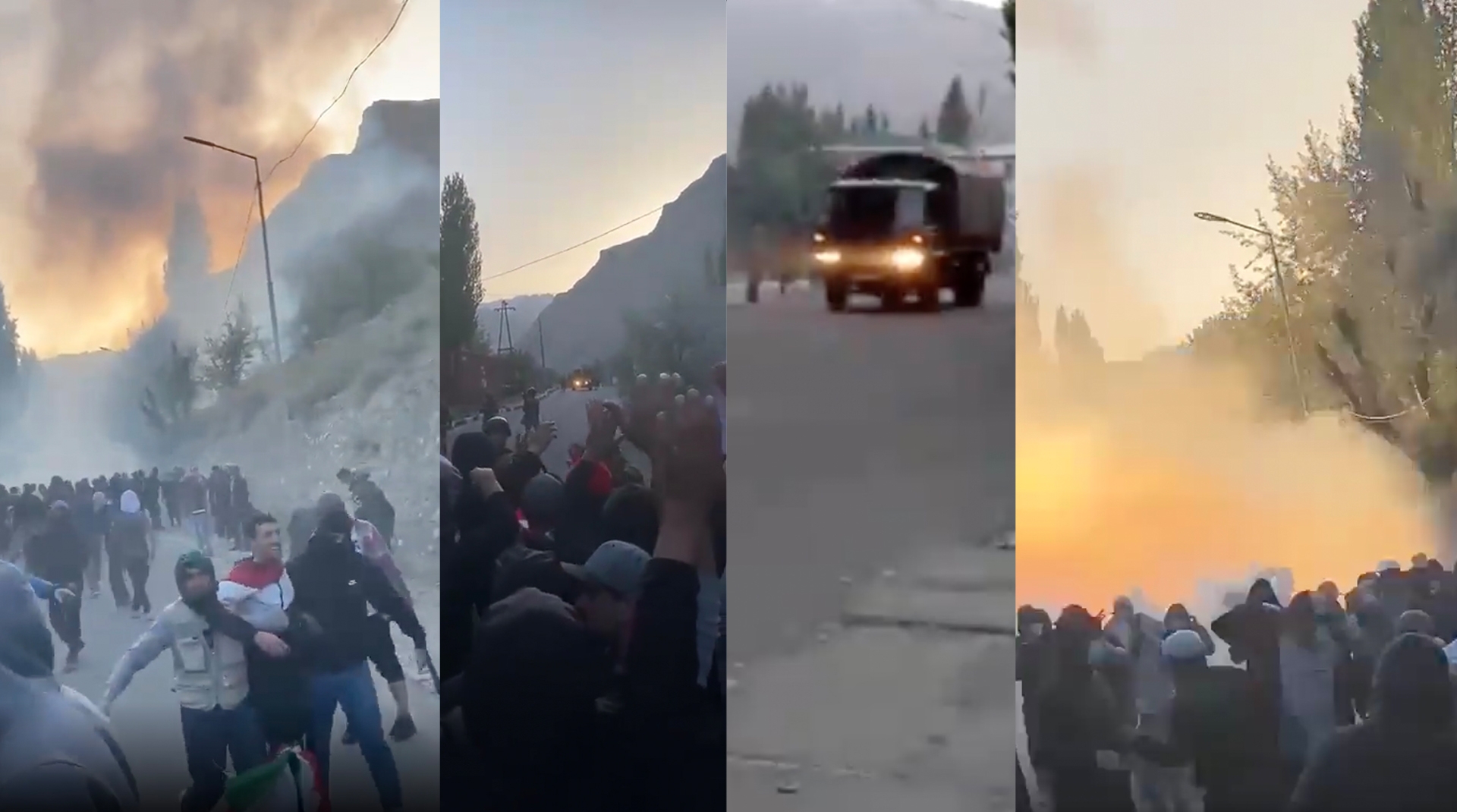 Unverified images of the unrest posted to social media.

The security crackdown that the Pamiris of east Tajikistan have nervously been expecting for months finally arrived this week, claiming at least 10 lives already. Many expect the toll to grow by the time the shooting has died down.

This latest crisis in the Gorno-Badakhshan Autonomous Region, or GBAO, has been on the horizon since last year. Unruly protests in the regional capital, Khorog, in November over the police killing of a local resident were only quelled by some frenzied mediation. By the time the dust had settled, at least two Pamiris had been killed. In characteristic fashion, the government quickly went back on its word. No thorough investigation of that killing was pursued and the security checkpoints that have kept the region on edge were not dismantled, as demonstrators had demanded.

While tension in the GBAO simmered, the security services turned their attention to Pamiris abroad. Russia-based Amriddin Alovatshoyev, who organized marches in Moscow to raise awareness about the turmoil in November, was kidnapped, likely with the connivance of the Russian security services, and spirited back to his home country. Last month, he was sentenced to 18 years in prison after a summary trial lasting a few hours.

Another person with roots in the Pamirs, Chorshanbe Chorshanbiyev, a popular 26-year-old mixed martial arts fighter, was forcibly removed from Russia to Tajikistan late last year. Last week, he was sentenced to eight-and-a-half years in prison for purportedly inciting an insurrection over remarks made in a video message expressing solidarity with the Khorog demonstrators.

That last verdict is among the developments that brought people out onto the streets in the GBAO over the weekend. Other demands included the removal of the GBAO governor, a figure appointed from Dushanbe.

Eyewitnesses say anywhere up to 1,000 people had taken to the square in Khorog from May 14 onward. Spooked by this turnout, the authorities delivered an ultimatum: If demonstrators didn’t disperse by 4 p.m. on May 16, they would be removed by force.

Violence broke out around that appointed hour. Despite having said they would initiate the dispersal, security officials later insisted it was the crowd that had instigated the trouble. The unrest, they said, was triggered by “ignorant young men.” One person, 29-year-old Zamir Nazrishoyev, sustained fatal injuries when the grenade he was wielding detonated, the police said. At least three police officers are said to have been injured in the unrest.

Getting independent verification for that account or for any of the official claims that have followed since is all but impossible since telecommunications were immediately severed. The region is remote and difficult to access. The country’s last surviving independent newspaper, Asia-Plus, was warned to refrain from reporting on events on pain of closure. Journalists with RFE/RL’s Tajik service who have been reporting on the unrest were assaulted.

The government reacted to the first wave of turbulence by declaring that it was launching what it termed a special anti-terrorist operation. Their authorities’ intention appears to be to finally do what they have been wanting to do for months by detaining, or killing, so-called informal leaders that serve as focal points for Pamiris craving for more autonomy.

Robust formal opposition to the regime is wholly impossible under the deeply authoritarian system created by President Emomali Rahmon. In this vacuum of legitimate politics, shady groups dabbling in unlawful activities are among the few remaining forces around which government opponents can rally.

The authorities have focused specifically since November on Mamadbokir Mamadbokirov, whom the authorities accuse of being a criminal boss. This week, they said that he, along with an activist called Ulfathonim Mamadshoyeva and a Europe-based political refugee Alim Sherzamonov, of conniving to organize the unauthorized anti-government rallies in the GBAO.

Mamadshoyeva, a Pamiri essayist who supported the opposition to the government in the civil war of the 1990s, told Eurasianet she only heard of the claims being made against her from the media.

“I am at home [in Dushanbe] and am not hiding from anyone. I returned from the Pamirs a week ago,” Mamadshoyeva told Eurasianet on May 17. She was arrested the next day. 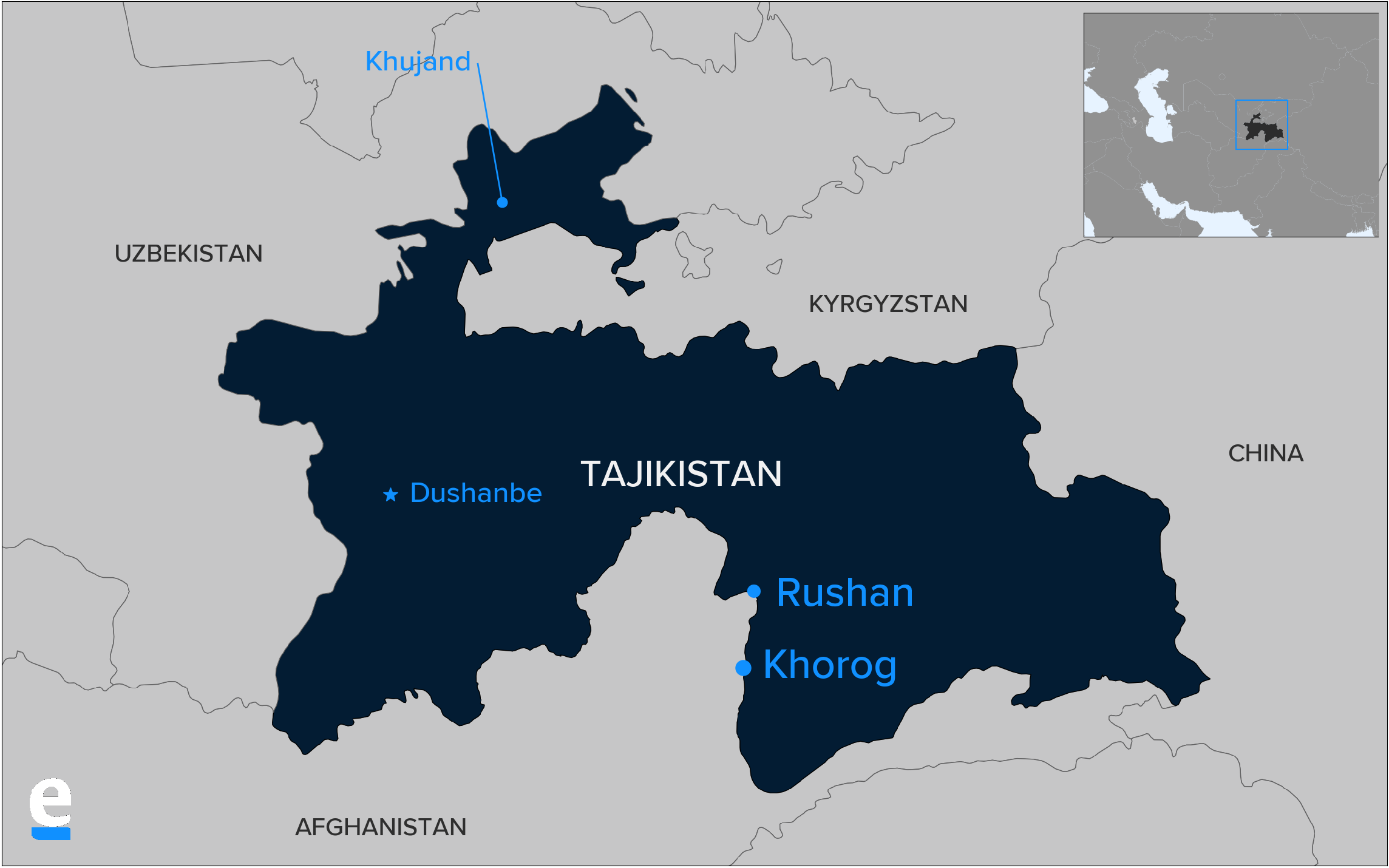 The details of what occurred on May 18 are disputed, but there is some overlap between what the authorities and independent sources are saying.

The Pamir Daily News Telegram channel reported one day earlier that several truckloads and pickup trucks of soldiers were being dispatched to the GBAO from Dushanbe.

Groups of residents in the Rushan district, which lies north of Khorog along the Pamir Highway, sought to block access to those troops by parking their cars in the road. Troops are said to have fired warning shots, injuring one local woman.

Government officials described these actions as a plot cooked up by persons beyond Tajikistan.

“Organized criminal groups consisting of around 200 people used various kinds of weapons to block the Dushanbe-Khorog highway and the border guard commandant’s office in three points at the center of the Rushan district,” the statement said. “The criminal groups prepared for this in advance and brought in weapons from abroad for this purpose.”

Most of what is known about what might have ensued comes from government sources. The Interior Ministry said in a statement that one officer with the State Committee for National Security and eight government opponents were killed in the clashes. The statement also said 13 troops were seriously injured.

Officials have insisted only armed men were killed in fighting, but unverified chatter on social media has described at least some of the fatalities as regular civilians.

In the total absence of reliable information, rumors are circulating. One is that government snipers posted along the Pamir Highway have been taking potshots at local residents. Another, which even the Defense Ministry felt compelled to deny, was that a Tajik army helicopter had been shot down by rockets fired into the Rushan district from across the border.

These events are unfolding at an especially complicated time for Tajikistan.

The economy is in danger of a new meltdown because of an anticipated collapse in the volume of remittances sent home by migrant laborers in Russia. Last month, a delegation of senior Tajik financial officials traveled to Washington to plead for aid from international financial institutions as the government faces the risk of a default.

Islamic State militants based in Afghanistan, who are known as the ISKP, earlier this month claimed to have launched rockets at Tajikistan – a claim that Tajik officials later denied. Extremism scholars writing for Eurasianet have noted that the ISKP is seeking to broaden its appeal in Central Asia, partly through the dissemination of propaganda directed at Uzbek, Tajik, and Kyrgyz speakers.

With all that happening, Rahmon’s government has decided this is the best time to pick a fight in the Pamirs.