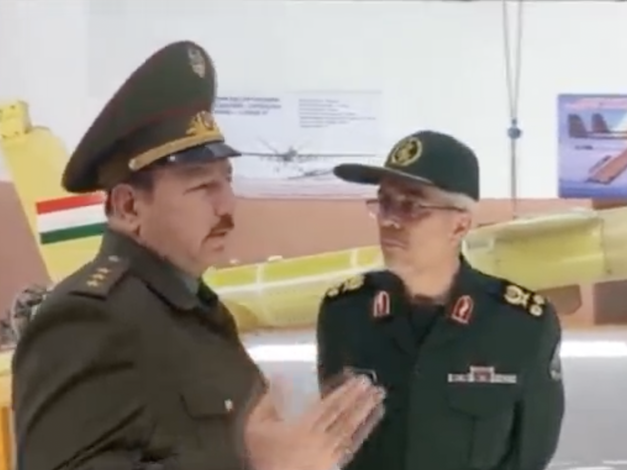 Tajik Defense Minister Colonel General Sherali Mirzo, left, seen alongside the chief of staff of Iran’s armed forces, Major-General Mohammad Bagheri, at a ceremony in May to mark the opening of an Ababil-2 production facility in Dushanbe. (Photo: Press TV)

Tajikistan has denied that it is supplying Iranian-designed weaponized drones reportedly produced at a manufacturing facility in its capital to Russia for use in its bombing campaigns against Ukraine.

The Foreign Ministry in Dushanbe released a statement on October 30 to refute claims made last week by a prominent Ukrainian journalist that Tajik-made drones were being used for “killing Ukrainians.”

“The republic of Tajikistan does not export military equipment to third countries,” the ministry said in its statement.

The use of Iranian so-called kamikaze drones by Russia to target civilian infrastructure in Ukraine has been the subject of denials and obfuscation. Ukrainian armed forces were reporting as early as mid-September that they had shot down an Iran-made Shahed-136 kamikaze drone relabeled by Russia’s army as Geran-2.

The full, deadly impact of Iranian drones was not felt until October, however, when Shahed-136s apparently sourced from Iran began raining down on Ukrainian cities. The Kremlin reacted to accusations it was using Iranian drones with flat denials.

Analysts cited by Ukrainian media have since speculated that it is not only Shahed-136s that are being used by Russia. On October 18, Kyiv-based news outlet Hromadske quoted Middle East affairs pundit Sergei Danilov as saying that some of the drones might have been produced in Tajikistan or Syria.

That undocumented allegation appears to have hinged on the detail that the chief of staff of Iran’s armed forces, Major-General Mohammad Bagheri, traveled to Dushanbe in May to attend the opening of a facility for the production of Iranian-designed Ababil-2 tactical drones. The unmanned aerial vehicle is described by U.S. military sources as a single-engine, long-range, low-technology drone that is mainly used as a target drone for training anti-aircraft defense crews, but which can also be deployed for “rudimentary surveillance capabilities” and as “a loitering munition.”

In an apparently unrelated development, a former commander in the Islamic Revolutionary Guard Corps and senior defense aide to Iran's Supreme Leader, Major General Yahia Rahim Safavi, told media earlier this month that Tajikistan was among 22 countries that have made formal requests to purchase Iranian-made military drones.

A spokesman for the U.S. Embassy in Tajikistan has told Eurasianet that the mission is aware of reports that Iranian drones are being manufactured in Tajikistan. He declined, however, to address speculation that the aircraft were being supplied to Russia and stated only that countries should avoid engaging in military dealings with Tehran.

“We discourage all countries from ​engaging in any military-related cooperation with Iran, actions which ​could ​put them at ​high risk of U.S. sanctions,” the spokesman said.

That Tajikistan is pursuing cooperation with Iran on defense issues represents an awkward fact for Washington, since the U.S. has provided dozens of millions of dollars in military aid to Dushanbe over the decades. Earlier this year, the U.S. ambassador to Tajikistan reportedly said Washington had committed to supplying Dushanbe with Puma reconnaissance drones as part of a $20 million defense aid package.