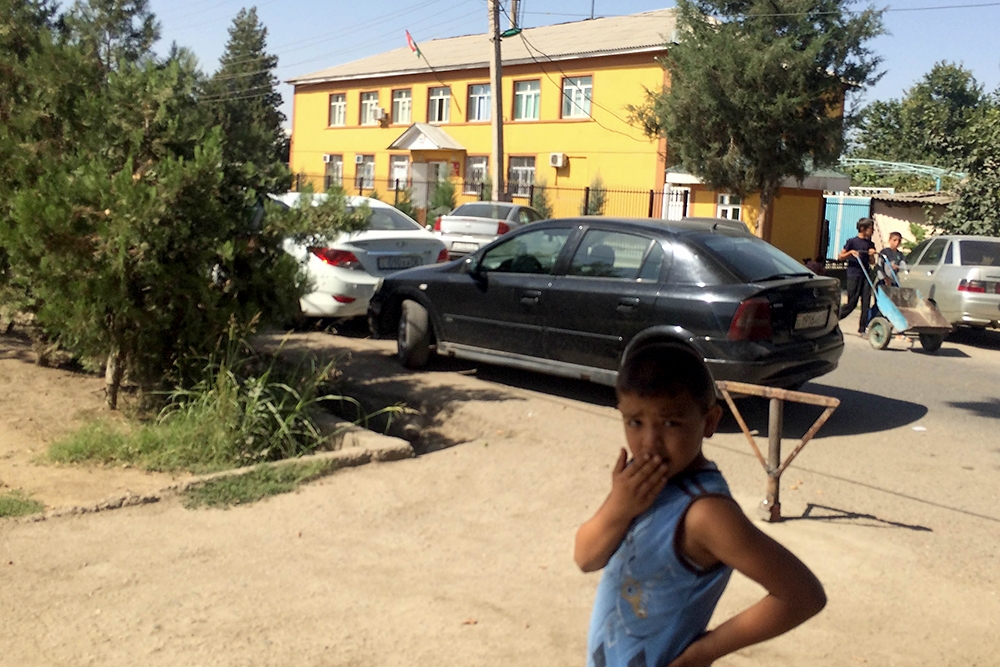 There are still lots of unanswered questions about the recent bout of violence that unsettled Tajikistan. But information that is independently verifiable reveals inconsistencies in official accounts.

Interior Ministry press releases have described two separate assaults in the early hours of September 4 — one in the capital, Dushanbe, and another on a police station in the nearby town of Vakhdat. As of September 8, officials said 26 people, including nine security personnel and 17 suspected militants, had died in the clashes and subsequent sweeps.

The government has described the armed group as a terrorist outfit led by Abduhalim Nazarzoda, who was serving as deputy defense minister right up until the September 4 events. President Emomali Rahmon has suggested vaguely that Nazarzoda’s group was set on “destabilizing the situation.”

Intent on understanding the scale of the clashes, EurasiaNet.org visited the two known flashpoints, but evidence there appeared only to undermine the official story. Government accounts are lacking in specifics, so it is not always possible to be certain how many were killed and where they fell, except when statements provide explicit details.

The casualty figures offered for the Vakhdat clash suggest that a prolonged firefight occurred there.

In its description of the events, the Interior Ministry said the clash at the station began at 4:28 am and at least four local police officers and two attackers died in the exchanges of gunfire. By way of a recent parallel in the region, a standoff between gunmen and special service troops in Kyrgyzstan’s capital in July lasted several hours and ended with six people, all suspected militants, being killed and several buildings burnt to the ground.

On September 5, on the morning after the reported attacks, Vakhdat’s police station, a Soviet-vintage, two-story building with no courtyard, stood entirely intact with not a single window smashed. Police on duty warned journalists against taking photographs and threatened to confiscate cameras from anybody who tried, but an image captured from across the road with a mobile phone clearly shows the untarnished state of the building. A tour round the entire perimeter showed that no exterior part of the premises bore signs of bullet holes. Residents in the surrounding neighborhood reported no stray bullets hitting their homes.

The police station building is situated one block away from the local bazaar, where vendors typically start to trickle in at around 7 am or earlier. On the day of the unrest, some arrived in town unaware of any unrest. The road running past the police station was free of any roadblocks and nobody noticed any especially intense security measures.

Those that stayed away said they did so either after receiving worried telephone calls or hearing about news of unrest on Russian television.

On the day after the purported attack, armed guards stood at gates closely checking those coming in and out, but police work continued as normal. A EurasiaNet.org correspondent watched as a woman wearing a veil covering her entire face — a type of clothing frowned upon by Tajik authorities — was dragged screaming into the police station compound. One man coming out was a portly 40-something with a Slavic appearance and showed a Russian passport to guards as he emerged.

About a dozen residents in the neighborhood around the police station offered generally similar accounts of what they heard — none dared to come out onto the street and instead remained in their homes. Estimates for the duration of the gunfire varied, ranging from 10 to 30 minutes. Some said they heard only single rounds being fired; others said they thought they recognized the rapid fire of automatic rifles (Kalashnikovs). One woman said the fighting appeared to have finished by the time of morning prayer, which would have been at about 4:26 am. Another family, which lives even closer to the police station, said the gunshots stopped only shortly thereafter.

An official at the local hospital, who spoke on condition of anonymity as he is not authorized to speak to the media, said four people were admitted with gunshot wounds on the morning of the unrest — three police officers and one civilian, a presumed militant. The official said all the injured were still being treated and had been placed under guard.

Business in the town on the day after such apparently major violence also appeared incongruous.

Around 200 meters away from the police station, on the freshly paved Somoni Avenue, hundreds of schoolchildren were rehearsing a ceremony planned for September 6, when President Emomali Rahmon was scheduled to lay the founding stone for a new police station building. Teachers corralled their pupils — boys dressed in smart suits and girls in traditional native clothes — into marching up and down the road in 25 degree Celsius weather. Plainclothes agents of the presidential security guard service stood impassively at the fringes of the rehearsal.

Elsewhere, the town showed the hallmarks of a busy market Saturday as throngs of shoppers headed to and from the bazaar. About 10-minute walk from the police station, a rowdy wedding celebration was taking place, revelers dancing frenetically to the blast of long karnay trumpets and ear-splitting drums.

Local media reported that the government had intensified security, but there was little sign of that in Vakhdat. The exit out of town in the direction of Dushanbe was guarded by a solitary soldier cradling an automatic rifle. The archway marking the eastern entrance into the capital, Dushanbe, was manned by only a few more men. Otherwise, little or no difference could be noticed in the amount of police regularly patrolling the capital.

Life also appeared to be proceeding as normal in the central Dushanbe area that was the site of the other flashpoint in the September 4 clashes. The only clear evidence of fighting there included the testimony of residents reporting hearing gunfire, spent bullet casings and one shallow slick of blood. Accounts offered by residents suggest the gunfight was short-lived and concentrated in a contained area at a junction near the airport.

An alternative but currently unverifiable account has now also been offered in a message purportedly relayed by telephone from Nazarzoda, an opposition warlord in Tajikistan’s civil war who earned his position in government as a result of a UN-brokered peace agreement that ended the war in 1997. This version, which was distributed through Facebook, alleges Nazarzoda received information on September 3 that he and his entourage were facing imminent arrest. Rather than face that fate, Nazarzoda and his men are said to have grabbed weapons from a depot and broken their way out of the capital.

That effort to break out of the city could be a reference to the incident at the airport junction, which lies along the eastern exit out of Dushanbe.

Authorities have adopted some minor but highly visible measures to show they are taking action.

At 12:10 pm on September 5, three military helicopters flew high above Vakhdat in the direction of the Romit Valley, where the government said Nazarzoda had holed up. Two helicopters flew back in the opposite direction, back toward Dushanbe, at 1 pm and were followed 15 minutes later by the third.

Around the same time that day, the Interior Ministry released a statement announcing it had captured 32 members of Nazarzoda’s gang and killed 13 of them in all. Authorities also said they seized 500 units of weaponry and ammunition, without giving specifics. On September 7, the Interior Ministry said government forces had detained another 14 of Nazarzoda’s associates.

Nothing in the rival accounts lends any indisputable understanding at all of who started what, when and why. What appears more clear is how the government intends to proceed. The outcomes of similar episodes in Tajikistan’s recent history would indicate that Nazarzoda’s future is bleak. “For Nazarzoda, surrendering to the criminal charges he was facing would mean death in prison, as former commanders in prison are dying slow deaths of various untreated health problems,” said Christian Bleuer, an academic specializing in the study of Tajikistan.

The Romit Valley is a dead-end location offering few obvious ways out, and even the statement attributed to Nazarzoda is fatalistic. “The general has said that they will continue their fight until the end, until victory or death,” the statement said.

Prospects also look dismal for the Islamic Renaissance Party of Tajikistan (IRPT), to which the government said Nazarzoda and other alleged accomplices belong. The party has, in effect, already been banned by a Justice Ministry decree late last month. Party leaders had suggested they would continue on, but the stakes in the wake of the September 4 violence are now much higher.

IRPT leaders may try to limit damage by vigorously distancing themselves from Nazarzoda, explaining that the former deputy minister could not be a party member, since acting military personnel are barred from such political affiliations. The party has also postponed a planned congress. That may be too little, too late, as Dushanbe-based political analyst Parviz Mullojanov suggested in remarks to Central Asian news website Ferghana.

“It is likely that the fighters that have surrendered will admit to having links to the Islamic party. And so it can be said with a 99 percent certainty that IRPT’s fate has been determined — it will be shut down,” Mullojanov said.