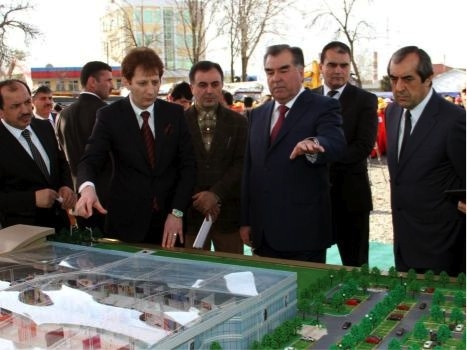 A photo originally from Zanjani’s website (since removed) shows Zanjani with President Rahmon and Dushanbe Mayor Mahmadsaid Ubaydulloyev admiring a model of his bus terminal.

One of Tajikistan's most prominent businessmen was reportedly arrested this week in his native Iran, suspected of embezzling $1.9 billion in illicit oil revenues. Babak Zanjani, whom the US Treasury Department and the European Union have blacklisted for helping Tehran launder oil money, was arrested on December 30, the BBC and local media reported. Zanjani, who denies the charges, has been under investigation since September, shortly after President Hassan Rouhani – who has called on authorities to fight "privileged figures" who have "taken advantage of economic sanctions” – assumed office.

Zanjani has admitted helping Iran earn $17.5 billion in hard currency by selling its oil through his network of companies in Dubai, Turkey and Malaysia, evading Western sanctions designed to pressure Tehran to give up its nuclear program. But it seems Iran’s new leadership is now washing its hands of Zanjani.

In Tajikistan, Zanjani is best known for launching a sprawling business network with the blessing of President Imomali Rahmon. He estimates his net worth at $13.5 billion – roughly twice Tajikistan’s GDP. But his decision to invest in Tajikistan has raised eyebrows, since the country is so opaque and its market so small. As EurasiaNet.org reported last summer, his appearance in Tajikistan prompted concerns that the natural-resources-poor but narcotics-rich Central Asian country was becoming a mecca for money laundering.

Babak Zanjani’s Tajik empire includes a bank, an airline, a taxi service and a bus terminal that President Imomali Rahmon himself helped inaugurate in March. That cushy relationship, in a country where foreign businessmen say it is impossible to survive without top-level political connections, has coincided this year with increased international scrutiny of Tajikistan’s lax attitude toward money laundering. Beyond Tajikistan, Zanjani’s business interests are sprawling. On its website, the Dubai-based Sorinet Group, which describes Zanjani as its chairman, lists at least two dozen companies engaging in construction, cosmetics, hospitality, transport, and oil and gas extraction. The site also lists the Asia Express Terminal in Dushanbe as one of its subsidiaries. … [S]enior Western officials are concerned about Zanjani’s relationship with Tajikistan’s leadership and worry that Dushanbe is serving as a money-laundering hub. “Zanjani’s been embraced by the president. The president even opened the bus station, which is unheard of. It’s too cozy a relationship. We believe he’s using Tajikistan to launder Iranian oil money,” said one senior Western official.

In late December, Iranian parliamentarians reportedly said that documents Zanjani had provided to prove that he used the National Bank of Tajikistan to transfer home the $1.9 billion in missing oil revenues were fakes.

On December 30, a spokesman for Tajikistan's National Bank also said the documents are phony, adding that Zanjani no longer has any connections with Dushanbe-based Kont Investment Bank (also sanctioned by the US treasury), Dushanbe’s Avesta news agency reported. Intriguingly, Avesta adds, the Tajik parliament had waved import duties for the Kont Investment Bank.

As the scandal unfolds, it might become embarrassing for Rahmon, who appears in a widely circulated photograph with Zanjani, admiring a model of the bus terminal he built in Dushanbe last year. A video on YouTube also shows the two together at the opening and Rakhmon touring the facilities of Zanjani’s taxi company. Iranian officials, like their Western counterparts, are probably curious to learn just how cozy that relationship was.