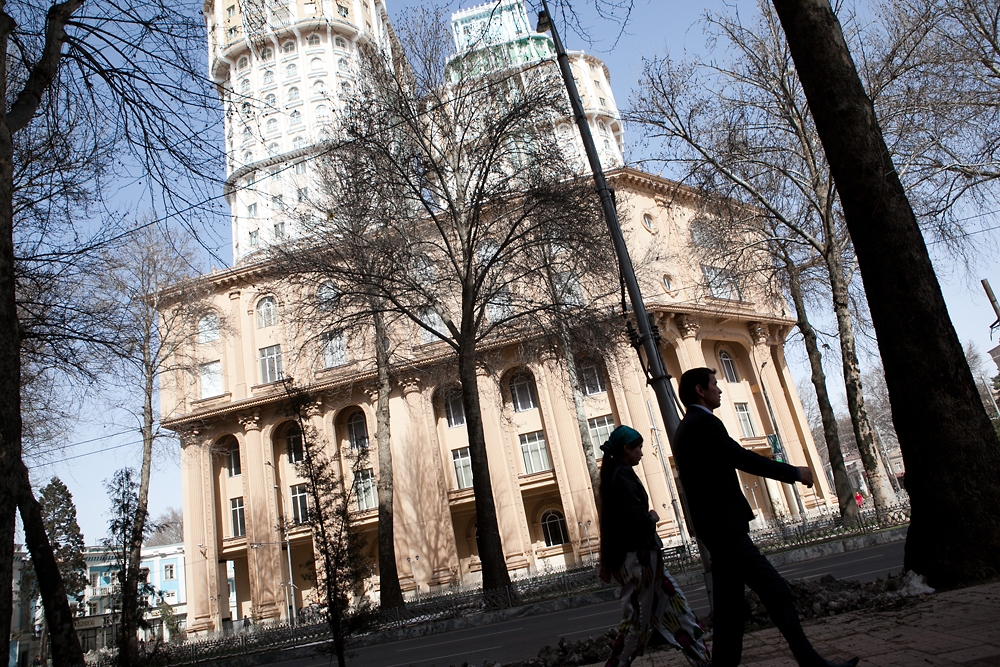 Dom Pechati - towering 22 stories over Dushanbe and nicknamed for a nearby printing house - is now the city’s tallest building. (Photo: David Trilling)

A building boom in Tajikistan’s capital Dushanbe -- one that has given rise to Central Asia’s largest library, tallest flagpole and the soon-to-be most spacious teahouse – is prompting some residents to joke that the city is becoming a showcase for a new-ish architectural style, “dictator chic.”

While a few may laugh, the government’s apparent preoccupation with building has plenty of other Dushanbe residents grumbling. At a time when the majority of Tajiks are fighting a desperate battle against poverty, critics contend that vast state layouts for showpiece construction projects cannot be justified.

The pace of new construction was at its fastest during the months leading up to the 20th anniversary of Tajikistan’s independence last fall. To celebrate the occasion, authorities commissioned several hundred so-called “jubilee objects.” Officially, the state spent $212 million on anniversary preparations, an amount equaling 10 percent of the national budget, and six times the annual assistance the United States Agency for International Development gives Tajikistan.

Although the independence anniversary has come and gone, the penchant for urban renewal remains strong. In February, Dushanbe authorities published a list of several dozen buildings located along the so-called “protocol highway” – on which President Imomali Rahmon and other senior officials drive to work – that have been designated for demolition. Many of these buildings are solid apartment blocks that are home to several thousand people. Officials are mum on kind of compensation owners can anticipate, and residents expect to be moved to the distant suburbs: they’ve seen the relentless development approaching for years, including high-rise, “elite” apartments in their neighborhood.

As construction proceeds, Dushanbe’s faltering infrastructure – including aging sewers and fraying power lines – isn’t being fixed, according to sources familiar with the plans. Currently, less than 50 percent of Tajikistan’s population has access to safe drinking water. That fact is sparking concern that the current building policy may help foster a public health crisis. The new construction only heightens the risks, argues Sabit Negmatullaev, a former president of Tajikistan’s Academy of Sciences.

“The water and sewage systems in [central Dushanbe] were built in the 1970s and 80s and are worn-out. They are unlikely to cope with the dozens of new buildings,” Negmatullaev said.

Indeed, residents report decreased water pressure in older buildings near the new high-rises.
Previous experience provides ample reason to worry about public health consequences. In 1997, for example, a typhoid epidemic struck Tajikistan, mostly in the capital and southern Khatlon Province. Specialists from the US Center for Disease Control and the Red Cross determined that the outbreak was partially spread by cross-contamination between aging potable water and sewage pipes. The UN estimates 80 people died during the epidemic.

Representatives of Dushanbe’s municipal waterworks did not make themselves available for interviews. But Kudratullo Faizulloev, head of the Architecture Department at the Mayor’s Office, defended the current policies, asserting that the new construction is urgently needed to meet the needs of a growing population. Projects are “approved only if they meet all safety requirements,” he told EurasiaNet.org.

Building-code enforcement could have crucial implications for the city’s future. Prior to the Soviet collapse in 1991, few buildings over five-stories were constructed in Dushanbe, a city that is prone to experiencing powerful earthquakes. Some new buildings are nine stories, or taller.

Gulsara Pulatova, a former regional coordinator at the UN’s disaster risk reduction office, says Tajikistan lacks necessary experience in high-rise construction. “The planning requires the taking into account of [the region’s] high seismicity; clear evacuation plans should also be developed. Many city districts do not have proper water and electricity supply, especially in winter seasons. The excessively dense construction can lead to serious accidents,” she said.

Questions about quality control continue to swirl around the new construction. A few seven-story buildings in one suburb, for example, are noticeably sagging, while plaster is already chipping off a yet-to-be-opened 22-story structure that dominates the downtown skyline.

On social networks and in newspapers, Tajiks are increasingly vocal about their displeasure with the authorities’ plans. The former chief architect of Dushanbe, Rustam Karimov, told EurasiaNet.org that there is no dialogue between the city administration and the public. “Even in Soviet times, decisions on essential objects would be made only after public discussions,” said Karimov.

During a recent visit to the $40-million, 45,000-square-meter library, which President Rahmon inaugurated on March 20, a EurasiaNet.org correspondent could only find one room with books – everything from Pushkin in three languages to coding textbooks for obsolete computer languages. Library staff insisted the building contained many more reading rooms, but that the people with keys were absent.

Younger Tajiks feel the new buildings brighten the capital and a source of pride in their country. But those from older generations are disappointed with what one called a lack of “aesthetic logic.”

“In the last couple of years, the architectural ensemble of Dushanbe has been completely destroyed, and it is impossible to change it,” Gennady Ratushenko, a celebrated local photographer with a background in design said. “The town’s landscape needs an aesthetic logic.”