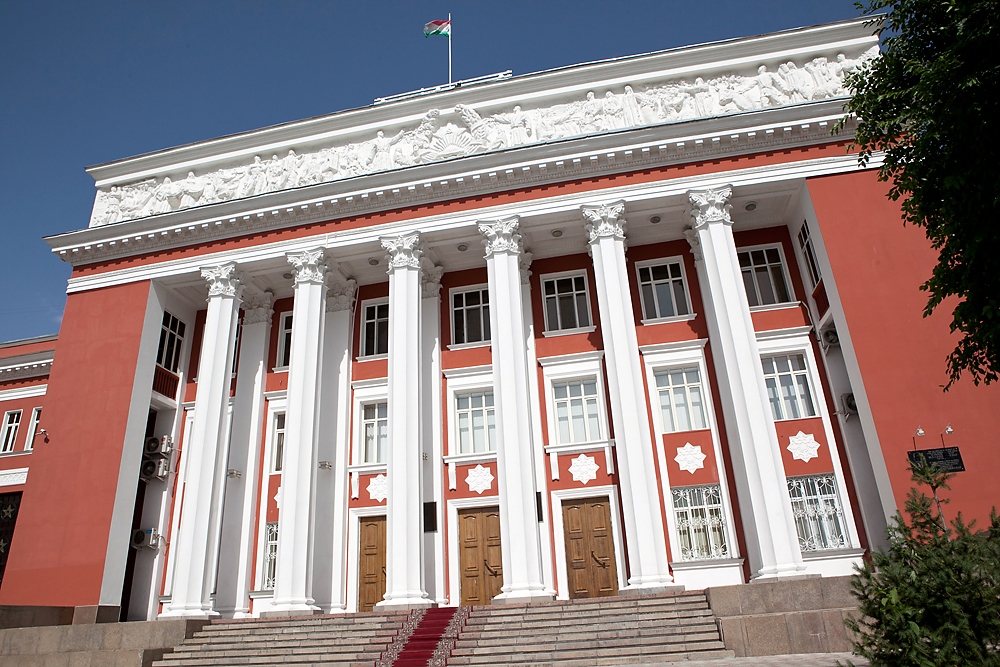 Another Soviet-era building that could soon face the wrecking ball. (Photo: EurasiaNet)

Without discussion, and just when residents thought it had stopped, Dushanbe’s mayor has announced a new phase of urban renewal, one that means razing another area of the city’s historic downtown.

Central Dushanbe is a smorgasbord of neoclassical and constructivist architecture dating to the 1930s and 1940s. Only a village when Moscow anointed Dushanbe as the capital of the newly created Tajik Soviet Socialist Republic in 1929, Dushanbe over the next two decades sprouted all the accouterments befitting a republican center: an opera and ballet theater, a Supreme Soviet (now parliament), ministries and a national library. Such structures fulfilled the Soviet mantra “national in form, but socialist in content,” meaning the handsome designs would be adorned with orientalist motifs: arches and eight-pointed stars wrapped around Corinthian columns. This was long before Soviet architecture became synonymous with drab, pre-fabricated concrete edifices.

Many of the buildings in central Dushanbe have been lovingly cared for over the years and are still used. Yet they are disappearing at a clip that is alarming residents, who feel authorities are bent on sweeping away the vestiges of the Soviet era and refashioning the city along the lines of gaudy, oil-rich capitals such as Astana, where bigger equals better. Early this year the constructivist Central Post Office on the city’s main square disappeared. A few years before, the central park and surrounding buildings were ploughed over to make way for a $300-million palace that stands largely empty, and a library, said to be the largest in the region, that has few books and a lot of empty office space.

Last month, Mayor Mahmadsaid Ubaidulloev signed a decree authorizing the destruction of 34 more buildings near the central square, including his own neoclassical office, the adjacent Agricultural Ministry, the prosecutor’s office, the Museum of Musical Instruments, and dozens of solid residential buildings – despite a city-wide housing shortage.

“The buildings designed by [Soviet] architects attach a very specific color to the city, which makes Dushanbe so different and unique compared to other cities and towns across the globe,” Gafur Shermatov, a historian and author of numerous publications about the architecture of Dushanbe, told EurasiaNet.org. “The city is relatively young, but in the last 80-odd years it has acquired its own inimitable face.”

City officials will not say how much the next phase of development will cost, or specify exactly what will replace the buildings, but residents are suspicious because earlier promises to spare historical monuments have been ignored.

Looking at recent redevelopment projects for hints, many assume the plan will cost hundreds of millions of dollars and will enrich those close to the authorities. But most are afraid to speak up against the powerful mayor.

One businessman explained that “construction is the most profitable business in Tajikistan,” because it is a haven for money laundering and artificial markups. That helps explain why buildings cost twice what they do in some European countries. In downtown apartment blocks, which often lie empty, the finished price for one square meter varies from $3,000 to $3,600, several times higher than similar properties in Bulgaria and Spain.

A Westerner who has visited Tajikistan over many years said he finds sycamore-lined Rudaki Avenue, “so unique it should be listed as a UNESCO world heritage site.” On condition of anonymity for fear of losing his visa, he said the persistent destruction, more apparent each time he visits, is “heartbreaking, all the more so because the new buildings are poorly constructed and destined to collapse in the first tremor, unlike the solid Soviet-built ones.”

Tajikistan is the poorest of the post-Soviet countries. Education and medical care have sharply deteriorated since independence, many Tajiks struggle to stay above the poverty line, and at least a million leave every year to search for jobs abroad. While the construction industry is thriving, the public has little idea about the amounts allocated for the palace, the library, or other vanity projects like the world’s tallest flagpole and the world’s largest teahouse.

Foreign donors pump tens of millions of dollars into the country each year, only to see the state spend funds on projects most Western officials dismiss as a waste.

“Is our state so rich? Is the municipal budget big enough to afford destroying dozens of good buildings and erecting new administrative ones? It might be better to use these resources for developing the outskirts, strengthening social infrastructure, medical and educational institutions, communal infrastructure, water and sanitation, sports grounds, etc.,” wrote a prominent economist on his Facebook page. “In civilized countries, authorities conduct referenda to discuss such issues.”

Shamsiddin Karimov, chairman of the Tajik National Association of NGOs, complains that Tajikistan lacks the tradition of public hearings. “Dialogue between the government and civil society has not become a systematic practice. Dushanbe residents are not satisfied with the urban redesigning and reconstruction. Why erect huge tall buildings in the historical downtown area? Non-governmental organizations – environmental groups, for starters – should interfere by challenging the authorities to an open dialogue,” Karimov told EurasiaNet.org.

Tajikistan’s Urban Design Code contains a provision clearly stating that “objects of cultural heritage … need to be preserved and protected.” But it is up to the mayor how to define cultural heritage.

“According to the law, the mayor of Dushanbe has the right to make decisions on the reconstruction of the city. But is it reasonable to make such a decision alone when it concerns a huge segment of the capital? The issue should be brought to public hearings involving civil society institutions,” Sergey Romanov, a lawyer who specializes in defending property owners’ rights told EurasiaNet.org.