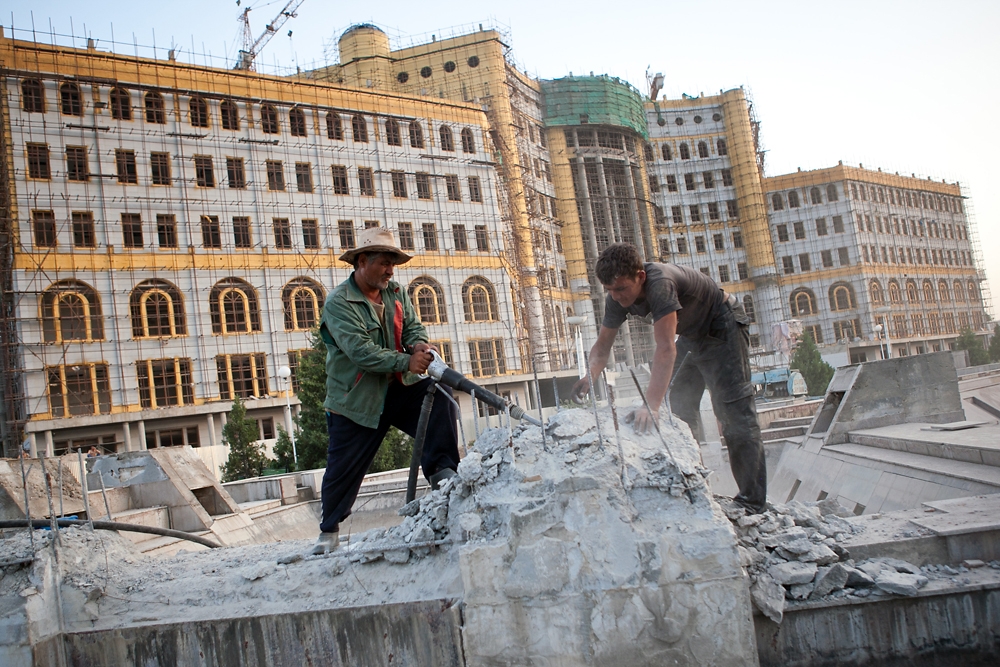 Officials are giving Tajikistan a flashy makeover to mark the country’s 20th anniversary of independence. But with vast numbers living in poverty, and with the government unable to provide basic social services, critics say the spending spree is an extravagance that the former Soviet Union’s poorest country can't afford.

The September 9 independence celebration coincides with Dushanbe’s turn to host the annual summit of the Commonwealth of Independent States, an ineffectual club of former Soviet countries. The summit is scheduled for September 2-3 in Dushanbe. Several notables – including Uzbekistan’s Islam Karimov and Azerbaijan’s Ilham Aliyev – reportedly will not be attending.

Concerning the Tajik capital’s makeover, local observers, of course, are asking: where is all the money for the changes coming from? For most construction projects, the cost is a strictly guarded secret.

Among the so-called “jubilee objects” is the Palace of the Nation – a neo-classical structure in the center of Dushanbe with at least 64 faux-Doric columns -- that houses presidential administration offices. Projects also include a national library that officials boast will be the largest in Central Asia -- if not the CIS -- and to which students and teachers reportedly have been forced to donate books. A new national museum and other administrative buildings in the capital and regional centers are also in the works.

A 45-meter pedestal bearing a relief of Tajikistan’s coat of arms has appeared next to the Palace, which has been used for official meetings for several years, but is reportedly largely empty. The building, western diplomats maintain, cost roughly $300 million to build. To put that expense into perspective, the 2011 state budget is approximately $1.8 billion.

Earlier this year, an American company erected the world’s tallest flagpole – at 165 meters it is three meters taller than the previous record-holder in Baku – next to the presidential palace in Dushanbe. The largest flag in the world – at 1,800 square meters – was raised on August 30 and certified by officials from the Guinness Book of Records. Dushanbe’s Asia-Plus news agency has reported that the Tajik Aluminum Company (TALCO), a state-owned enterprise partially registered in the British Virgin Islands, financed the project.

TALCO is sparing no expense celebrating Tajikistan’s culture, history and natural beauty. From August 25 to September 9, several times a day, the international satellite news channel Euronews is airing a glitzy commercial for Tajikistan, also funded by TALCO, according to a company spokesman. The thirty-second clip “will be a kind of hallmark of our country for the people of Europe,” Igor Sattarov, a TALCO spokesman, told Asia-Plus in early August.

One of the biggest aluminum smelters in the world, TALCO “is the single greatest source of Tajikistan’s export revenues,” according to a 2009 report by the International Crisis Group (ICG), and consumes 40-50 percent of Tajikistan’s electricity. President Imomali Rahmon takes an active interest in its operations, the ICG report asserted.

According to Hamrokhon Samizoda at the State Construction and Architecture Agency, 1,412 so-called “jubilee projects”– such as administrative buildings, cultural centers, theaters and monuments – will mark the holiday. Of those, local administrations’ budgets finance 368 and entrepreneurs are paying for 768, Samizoda told EurasiaNet.org. Some observers allege members of the country’s patronage networks are contributing to the construction projects to curry favor in powerful places.

Over the past month, Rahmon has traveled around Tajikistan to inaugurate some of these projects. State television regularly shows the president at various ceremonies, with local residents greeting him with flowers and ovations. In most cases, according to local media reports, critics are forbidden from meeting the president to share their concerns and suggestions. The celebrations are widely viewed as a competition among local officials for the president’s favor. Attempts to hide problems have prompted growing concerns that Rahmon may not have a clear idea what is happening in the country.

For many, the jubilee projects are just another reminder of Tajikistan’s growing economic divisions.

“Our people would prefer something useful to these new stores stuffed with expensive goods, empty museums and ugly monuments – for example, a new water supply system,” complains Rafoat Saidova, a worker at a private guesthouse in the southern city of Kulyab. “The temperature is high and there’s no water in the tap; it will be cold in the winter and again we aren’t going to have electricity. This is what we have every year, and there haven’t been any essential changes during the 20 years of independence. Authorities used to blame the [1990s] civil war, but that ended long ago.”