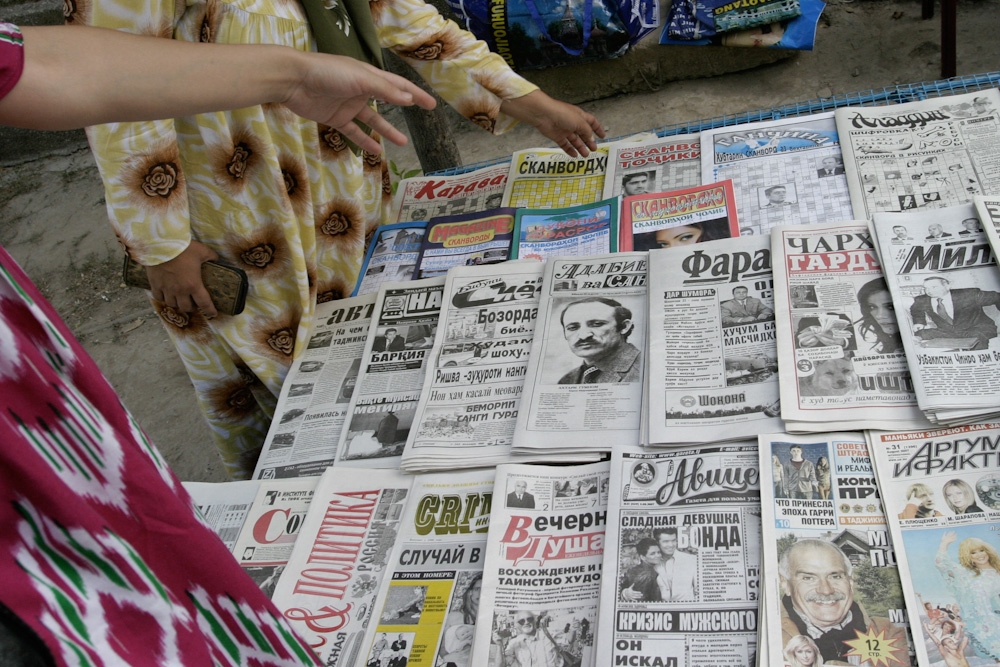 A newspaper stand in Tajikistan’s capital, Dushanbe. In a distressing trend for freedom of expression, the latest group to join the exodus from this Central Asian country is journalists. (Photo: David Trilling)

The combination of a stagnating economy and escalating repression is prompting a growing number of people to leave Tajikistan.

In a distressing trend for freedom of expression, the latest group to join the exodus is journalists. Several reporters spoke to EurasiaNet.org to share their motivations for making the move, but asked to remain anonymous in the interests of personal safety. They have been given pseudonymous names in this article.

There are no certain numbers about how many media professionals have left Tajikistan over the past year, but the figure is believed to be as much as several dozen.

Tajikistan dropped 34 places, to 150th out of 180 countries, in Reporters Without Borders’ latest edition of the World Press Freedom Index. But the worsening situation goes back several years.

As long ago as 2010, the founders of Asia-Plus website and newspaper, Umed Bababanov, and the Ozodagon website, Zafar Sufi, left the country. Sufi initially returned to Tajikistan occasionally for visits, but he now sticks to running his website from abroad.

Now it is reporters who are leaving.

Media expert Abdumalik Kodirov notes that there are several categories of journalists now seeking to leave the country. Some do so out of fear for their lives, while others merely seek to exploit the worsening situation as a pretext to make a break for the West.

Some of the most commonly used forms of moral pressure applied on journalists include insults and humiliation on social media, or the leaking of sometimes concocted compromising material, Kodirov said.

Farrukh, who is currently residing in Europe, said he departed initially to study for a few months, but with the course now over he is contemplating what to do next. “I am here, but my heart is in Tajikistan with those dear to me. Any careless word could harm them,” Farrukh said.

Farrukh said he had not received any threats over his work, but realized that it was time to leave. “I just understood that in Tajikistan there was nowhere to go. I left Tajikistan for my own development and for the future of my children. But that doesn’t mean I have left Tajikistan completely — it is still my homeland,” he said.

Another journalist now living in Russia, Firuza, said that she left Tajikistan after being subjected to endless harassment by agents of the State Committee for National Security (GKNB), the successor agency to the KGB. “I had a nervous breakdown. I decided to come to Russia to study, but I didn’t pass the entrance exam. So I am working in a company here, helping them out, trying to make something of a living,” she said.

Another reporter with a leading Tajik publication, Sobirdjon, said that he began coming under pressure following events on September 4, 2015, the day on which a disaffected former defense minister is purported to have mounted an attempted coup.

“I am tired of spending my time in state security services premises. This is more exhausting and dispiriting than actual journalistic work. So I decided to drop everything and leave. I didn’t go to Europe, because the only way to get there legally is by formally asking for asylum. I don’t know the languages and nobody will give me a job so that I can legalize my status normally. So I went to Russia to work and from time to time, I visit my relatives back home,” Sobirdjon said.

The journalist said that not only was he subjected to pressure, but that national security officers visited his home, threatened his relatives, including his mother, so that he would repudiate authorship of his previous articles.

Journalists seen as sympathetic to the banned opposition Islamic Renaissance Party (IRPT) have come under particular suspicion. Authorities have openly warned publications not to allude to the party or interview any of its members.

“They said that I was a terrorist sympathizer. … At that time, and even now, if anybody so much as said a word in favor of the IRPT, or did an interview with one of their people, they [the writer] would immediately be put in jail,” Sobirdjon said. “We thought we were just covering events … but security services used this as their hook and they would issue threats that I could face charges.”

Kodirov, the media expert, said that as well as draining the country of many bright minds, the flight of journalists from Tajikistan is also damaging the country’s international standing.

“Freedom indices affect the development of a country and its business. Not a single normal investor will put money into a country where there is no freedom of speech, and where the laws don’t operate,” Kodirov said. “The outflow of journalists indirectly impacts the country’s economy. If migrant laborers are going to Russia for work, the ones going to the West are the real minds that Tajikistan needs.”

The latest members of the exodus are only the tip of the iceberg, said Saymuddin Dustmuhammediyon, head of the Indem analytical group.

“Mainly, the people leaving are those from the creative professions and highly educated people. Previously, rural folk and young people left. Lately, older people with entire families are leaving. They leave because politics and the economy are in free fall, the educational system has collapsed, medical services have fallen through the floor, there are no opportunities to improve one’s lot,” Dustmuhammediyon said. “Everything is monopolized, from the granting of jobs to selling sausages at the bazaar. Without nepotism, you cannot even get a job as a street cleaner.”

Dustmuhammediyon said that economic realities have made a bad situation worse and that wages for journalists have shrunk drastically in recent years, as has the market for their services. “More than 100 journalists have left. If we talk about Europe and the United States, it is around 30 people,” he said.