Dushanbe regularly used to accuse Tehran of supporting militant activity, but no longer. 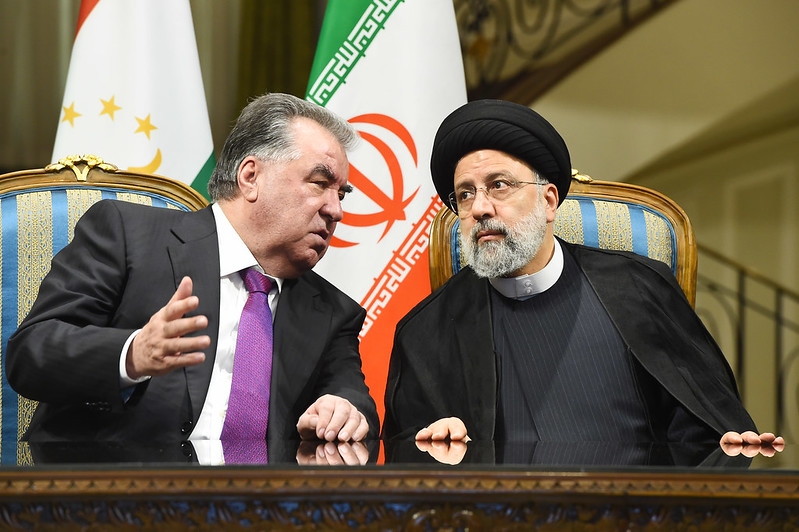 The long period of frost in relations between Tajikistan and Iran has come to an end.

There was clear evidence of that on May 29, when Tajik President Emomali Rahmon paid an official visit to Tehran during which he and his hosts pledged to improve diplomatic and trade relations. Greater cooperation on security affairs is also on the cards.

And yet, as recently as 2020, Tajikistan was flinging bitter accusations at Tehran. In one documentary aired on state television that year, Iran was accused of funding militant activity in Tajikistan. Around the same period, dozens of graduates of Iranian universities were sentenced to lengthy prison terms.

That felt like ancient history on May 30, when officials from the two fellow Persian-speaking countries signed 17 agreements on cooperation in areas including trade, transportation, energy, education and tourism. One key breakthrough was a decision to resume direct flights between Tehran and Dushanbe.

Iranian state media have attributed the reset to President Ebrahim Raisi, who assumed office in August 2021. Speaking to the IRNA news agency, Ali-Ashraf Mojtahed Shabestari, Iran’s first ambassador to Tajikistan in the 1990s, argued that “Raisi’s decision to choose Tajikistan as the destination of his first presidential trip [to the attend the Shanghai Cooperation Organization summit in August 2021] was of high significance for Tajiks.”

Last month, the Iranian armed forces chief of staff, Major-General Mohammad Bagheri, traveled to Dushanbe with pledges to enhance bilateral security cooperation. During his visit, Bagheri and his Tajik counterpart attended the opening of a facility for the production of Iranian-designed Ababil-2 tactical drones. The unmanned aerial vehicle is described by U.S. military sources as a single-engine, long-range, low-technology drone that is mainly used as a target drone for training anti-aircraft defense crews, but which can also be deployed for “rudimentary surveillance capabilities” and as “a loitering munition.”

Tajikistan has for most of its post-independence history looked first and foremost to Russia as its main security guarantor. Russia has several thousand troops deployed at a series of military outposts across Tajikistan, although there is speculation that a substantial number of those men have been redeployed as a direct consequence of the war in Ukraine. Moscow’s precipitous retreat into isolationism following the start of its invasion and the sharp expected contraction in its economy caused by sanctions appears to a likely contributory factor to countries in Central Asia, Tajikistan among them, urgently pursuing more diversification in both defense and trade relations.

The nod to security cooperation with Tehran is particularly surprising, though, in light of what Tajikistan has been saying about Iran for the past eight years or so. State television has routinely broadcast reports accusing Iran of financing terrorism in Tajikistan and of backing the opposition in the civil war of the 1990s.

One episode that caused particular bitterness occurred in December 2016, when Tehran invited exiled Tajik opposition leader Muhiddin Kabiri to attend a state-sponsored conference entitled “Islamic Revival.” Kabiri even met on that occasion with Iran’s Supreme Leader Ali Khamenei. The Tajik Foreign Ministry responded with a diplomatic note to Iran registering its irritation that the “head of a terrorist party suspected of mounting an attempted overthrow of the government” had been invited to the conference.

Things only got worse from there. The Tajik customs service introduced restrictions on the import of food products from Iran. Dry leaf tea, poultry and other goods were ruled unacceptable for their allegedly poor quality. In July 2016, the Tajik office of Iran’s Khomeini Imdod Committee, an international development fund, was pressured into closing its doors. All direct air routes were suspended and the parents of young people pursuing their studies in Iran were pressured to bring their children home.

To compound matters, Tajikistan began from that point onward to aggressively cultivate relations with one of Iran’s most despised foes: Saudi Arabia. The apparent aim of the charm offensive was seemingly to secure investment and aid. This plan yielded little fruit, though. While Riyadh offered money to support educational projects, this nowhere near matched Dushanbe’s needs and expectations.