Ziyoyev ruined his own lender by issuing dubious loans to relatives and cronies. 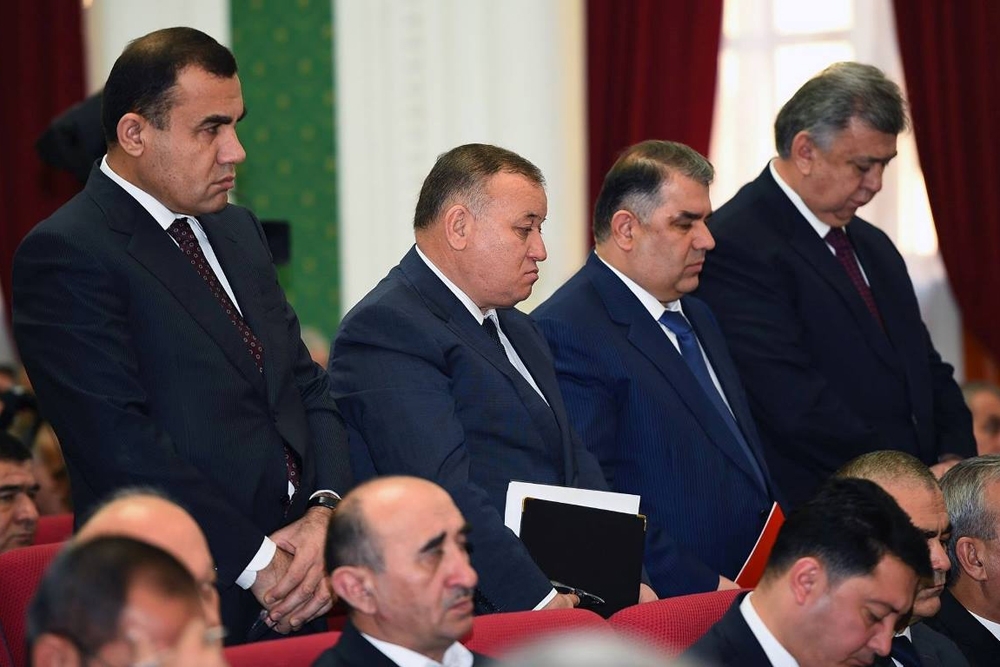 Jamshed Ziyoyev (second from left), the majority owner and chairman of Tojprombank, stands beside the heads of Fononbank, Agroinvestbank and Tojiksodirotbank during a Tajik government meeting in 2016 dedicated to a possible government bailout of the four distressed lenders. Tojprombank collapsed in 2017. (Photo: Tajik Presidential Press Service)

A senior business executive in Tajikistan who oversaw the collapse of a major bank has been sentenced to eight-and-a-half years in prison on charges including embezzlement, fraud and forging documents.

Although the ruling against Jamshed Ziyoyev, ex-chairman of Tojprombank, was handed down at the start of the month, it was only reported by local outlets on December 18.

Ziyoyev and his deputy, Mahmadullo Mirzoyev, were arrested in April 2018 on suspicion of various illicit financial machinations, such as granting bogus loans and misspending bank funds. Tojprombank was one of several lenders in Tajikistan that collapsed as a result of a lax policy of profligate lending, often to close business associates of the bank itself or to politically well-connected individuals.

Documents seen by Eurasianet in 2017 showed that a substantial chunk of loans issued by Tojprombank were made out to Ziyoyev’s son, Aziz Ziyoyev, who fled the country after his father’s arrest.

Tojprombank was founded in October 1995 as an all-purpose retail bank. The controlling shares of the company were held by Ziyoyev. Signs the lender was in distress began to emerge in 2015. In the middle of 2016, Ziyoyev was removed as head of the bank, which was placed under administration. In December, the National Bank declared it was refinancing Tojprombank to the tune of 450 million somoni ($56 million) and reappointed Ziyoyev to his old job and ordered him to restore the lender to health. Bailout money was raised through the issue of somoni-denominated sovereign bonds that were converted into liquid cash by the National Bank.

Following the collapse of Tojprombank, President Emomali Rahmon sought to calm moods by pledging that all the lender’s clients would in the fullness of time have their savings reimbursed. That promise has largely gone unfulfilled, however.

One defrauded depositor has told Eurasianet on condition of anonymity that since the bank was wound down, he has not got back all his money, but has instead been paid monthly tranches of between 500 and 1,000 somoni ($44 and $88) by liquidators.

Under the government’s plan to liquidate the bank, state agencies were the first in line to reclaim funds. Only once those liabilities were resolved were the demands of clients addressed.

There are other banks whose fate is still in the balance – namely, Tojiksodirotbank and Agroinvestbank. The National Bank has routinely dangled the prospect of liquidation for them too unless they are able to improve their balance.

Their collapse would be even more complicated than that of Tojprombank. According to the latest data, Agroinvestbank holds deposits amounting to 700 million somoni ($79.5 million), while the figure for Tojiksodirotbank is 904 million somoni ($100 million).