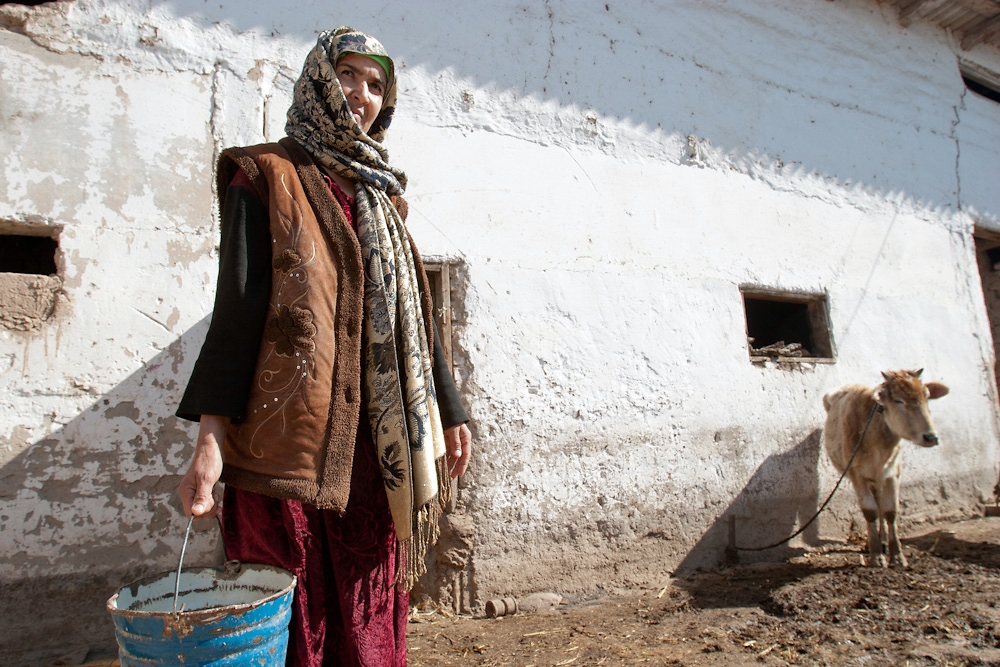 Twenty-seven-year-old Manucher has spent every day for the past six years cleaning out manure and, in winter, snow from his cattle barn. In his impoverished village not far from Dushanbe, Tajikistan’s capital, he counts himself lucky to have the work.

The problem is, what Manucher does is technically illegal because Dushanbe’s mayor says the village where he makes his living lies within city limits. City officials prohibit residents from keeping livestock and chickens. So Manucher bribes local police to look the other way.

In their settlement of neat cottages and high walls -- where it’s not uncommon for residents to keep sheep, cows, or a few chickens for personal consumption -- Manucher (not his real name) and his brother are professional livestock breeders. They keep cows and sheep behind their homes. “Everyone in the neighborhood knows my cows are healthy and vaccinated, that’s why there’s a high demand for the meat I sell,” explains Manucher.

The money he and his brother earn allows them to lead a comfortable, if not extravagant, life. “This is the only thing I can do to feed my family. My wife is about to give birth to a second child; my brother has three children already. We need to take care of them,” says Manucher as he tosses another fork-full of hay for his animals.

Manucher’s suburb looks like a typical village in Tajikistan – dirt roads, frequent power cuts – except the animals that would normally be wandering the streets are kept locked up. On January 8, local news agency Asia-Plus reported that officials are again cracking down, searching Dushanbe houses for livestock in one of their periodic campaigns to enforce the 2009 ban.

No one really obeys the law, says Manucher, calling it “unworkable.”

The mayor’s website says the initiative is to keep Dushanbe clean, because farm animals are “a cause of environmental pollution and [violate] public health norms.” In a country where few take officials at their word, and graft is often recognized as the underlying motive behind sundry new laws, many Dushanbe residents believe sanitation is not really the mayor’s priority.

Many see the restrictions on livestock as motivated more by vanity and venality than sanitation. Dushanbe, a city of about 700,000 where residents have traditionally kept animals, has transformed in the past five years from a leafy city dotted with pastel-colored Stalin-era neoclassical buildings to an ostentatious facsimile of other post-Soviet hubs, dominated by large, mostly empty, flashy new buildings, and denuded of its beloved trees.

For a lot of families in Dushanbe, animals are an important source of income. “Now these families are broke, this [the ban] is a hard blow on their welfare and the welfare of the city,” prominent political analyst Parviz Mullojanov told EurasiaNet.org, adding that he sees no need for this “harmful” legislation. Tajikistan is the poorest post-Soviet country; 46 percent of the population lives in poverty, according to US government figures. Over a million Tajiks, perhaps one-half the working-age male population, migrates abroad each year in search of employment.

It is no coincidence that when pondering authorities’ motivations, many Tajiks tend to think about graft. Transparency International ranked Tajikistan 154 out of 177 in its most recent Corruption Perceptions Index. The livestock regulation is one of many laws that can enable corruption: Those who give bribes can keep their livestock.

Manucher and 10 neighbors each pay about 200 somoni (around $40) every month to police officers, he said. “He demands his ‘tip.’ If we don’t pay, he will report us,” says Manucher. That $480 per year is significant considering that a typical beat cop’s monthly official salary is about $100.

Shafkat Saidov, a spokesperson for the mayor’s office, told EurasiaNet.org that breeding livestock is a “hobby” and that there are free places outside the city for those who want to keep animals. “Like it or not, they must obey the law.” Saidov denied allegations the law is breeding corruption.

Some who aren’t even affected directly say they resent the government interference. “There are not enough jobs. The government should let people do what they can to earn money. This restriction is not fair; let people hold domestic animals,” said Sangina Siroch, 32, a teacher.

For some Dushanbe residents, the ban is genuinely popular. “These are the right decisions. The capital needs to be pretty and clean. Animals shouldn’t walk on the streets of the city,” Irina Kuznetsova, a 64-year-old pensioner, told EurasiaNet.org.
Sociologist Firuz Saidov also supports the measure, saying it helps Dushanbe present itself as a world-class city. “Dushanbe is now the capital of an independent state. Offices of many international organizations are here. [International] delegations visit the city. Imagine: If sheep and cows were walking the streets, it would ruin the image of the country,” Saidov told EurasiaNet.org.

For Manucher, though, image isn’t everything. His family has been raising cows for generations and he doesn’t intend to stop. Even though city officials have been searching houses recently, Manucher isn’t too worried: “In our country, you can do anything if you have the money to bribe officials.”