Tajikistan: Feast in the time of coronavirus

The president is bullish that his country will dodge the pandemic and spent the weekend glad-handing the public. 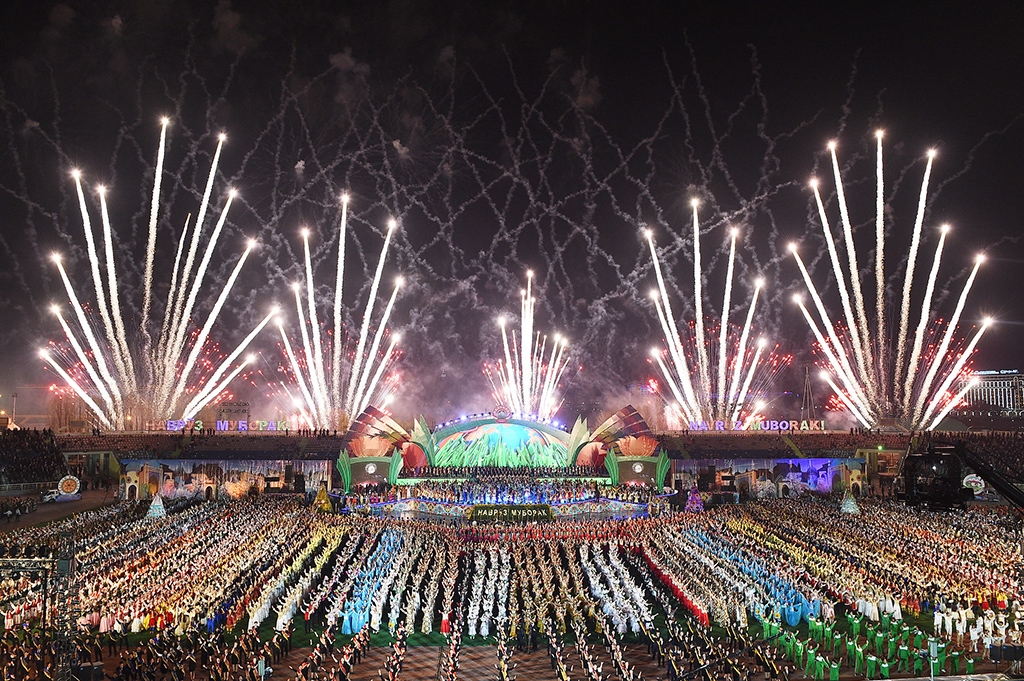 Many schoolchildren and university students were forced to dance for the president this weekend. (president.tj)

There are few countries left in the world that the novel coronavirus COVID-19 has not yet reached. Even in pockets relatively untouched by the virus, apprehension is intense.

Not Tajikistan. Authorities here had, as of March 23, recorded not a single case.

And the president, 67-year-old Emomali Rahmon, is not just unperturbed by what the World Health Organization, or WHO, has called a pandemic. He is positively bullish that his country will dodge the problem and, accordingly, spent the weekend glad-handing the public and attending massive celebrations and marches organized for the Nowruz spring holiday.

The secret, he says, is that Tajiks keep their houses spotless.

“Keeping homes clean and observing sanitary standards is one of the finest qualities of our people. And especially in situations when all kinds of infectious diseases are spreading fast,” he said on March 22, urging listeners not to submit to panic. “Our health is, first and foremost, in our own hands.”

That may be just as well. Tajikistan’s health care system is generally acknowledged to be in dismal shape.

A comprehensive report published by the WHO in 2016 found that quality of care has been undermined by “insufficient training, lack of evidence-based clinical guidelines, underuse of generic drugs, poor infrastructure and equipment (particularly at the regional level) and perverse financial incentives for physicians in the form of out-of-pocket payments.” That last point is a euphemistic reference to bribes.

Despite the potential blow a coronavirus outbreak could deal to such a teetering system, the government is nonetheless confident and intent on maintaining its life-as-usual stance.

Rahmon made his remarks about Tajikistan’s relative immunity to infectious diseases in the northern city of Khujand, inside a stadium packed with around 12,000 so people – many of them schoolchildren and university students – celebrating Nowruz. 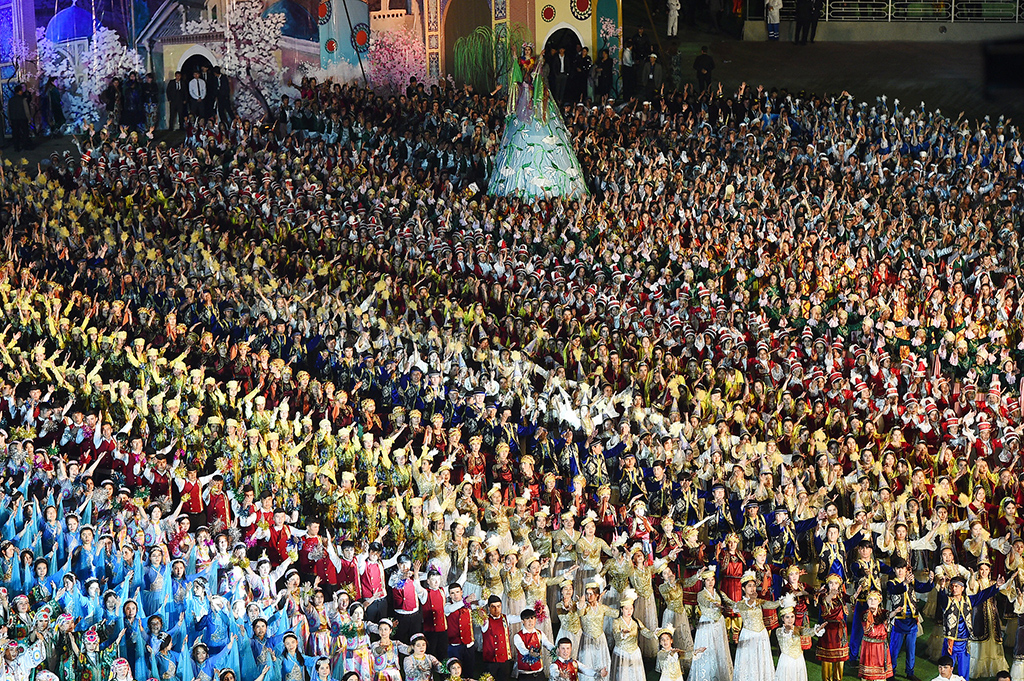 The feast lasted two hours and involved dancing, marches, culinary demonstrations and shows of local fabric crafts. At the end of the celebrations, fireworks were let off and speeches of gratitude delivered to the president.

This kind of event is in blatant contravention of the advice being issued by the likes of the WHO and health experts all around the world. And, for at least a moment, Tajik health authorities were listening.

In early March, the Education and Science Ministry ordered a halt to rehearsals for Nowruz festivities, which were due to take place in all major towns. But within a week, the rehearsals, which involved bringing hundreds, and sometimes thousands, of people into close contact to practice choreographed dances and performances had resumed. Mosques were ordered shut in early February, but likewise reopened a few weeks later. 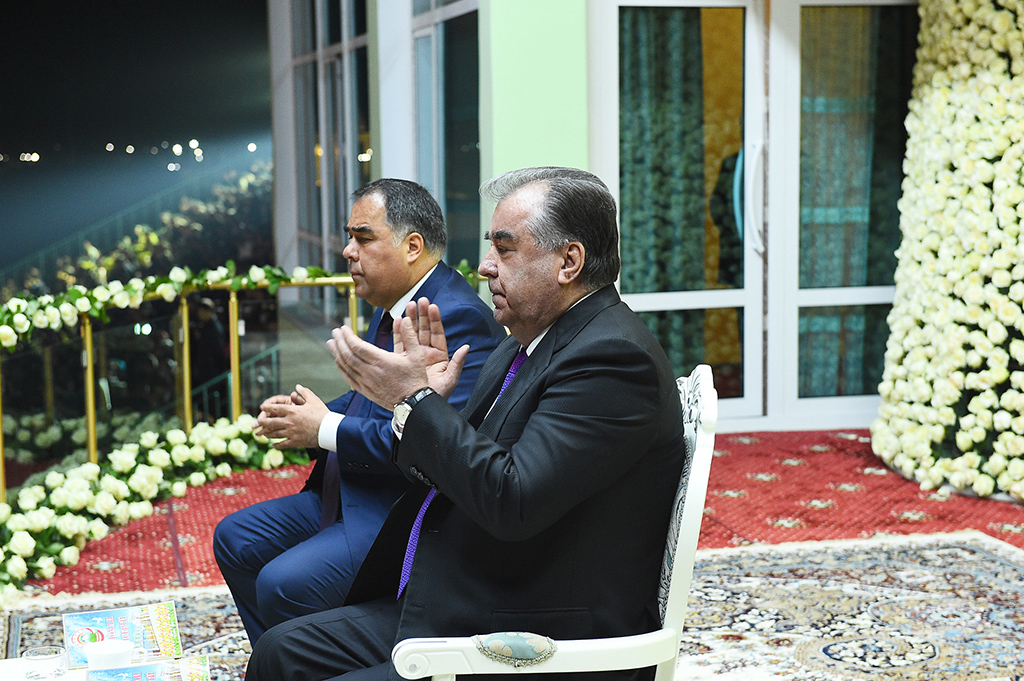 Shirin, one of the marchers at the Khujand feast and a student at the local state university, said she and her peers risked expulsion for failure to attend.

“Even if they don’t expel you over the march, they will find some other expedient. For example, they will give you bad marks, and you will be excluded automatically. But if you go to the march, then they will make some concessions,” said Shirin, who spoke to Eurasianet on condition her identity was kept secret for fear of incurring reprisals.

Teachers, meanwhile, faced the danger of dismissal if they failed to produce a good turnout.

Kurbon, a university instructor in Khujand who spoke to Eurasianet on condition his family name not be printed, said he was aware of the risks.

“I have an elderly mother at home, and I understand she is in a high-risk category if somebody brings the virus into the house. But there is no option not to work. I have a family. How am I supposed to feed them? Everything is in the hands of Allah. More people, after all, die in accidents,” Kurbon said.

There was a lingering hope that the president might call off festivities for Nowruz at the 11th hour. On February 29, Rahmon chaired a government meeting in which there was discussion about the measures being taken to stem the arrival of coronavirus.

Even before that, arriving air passengers were being made to undergo thermal screening to vet for anomalous temperatures. People arriving from China were required to go into quarantine. That same treatment was later reserved for people traveling from Afghanistan, Iran, Italy and South Korea.

On March 20, Tajikistan closed its airports altogether, albeit some flights are still being serviced. Tajik nationals trapped abroad and wishing to return home are being offered slots on charter flights, but fares for those seats are three times the normal price.

Returnees are being placed in quarantine for safe measure. But many are complaining about conditions in their places of shelter, saying there is no hot water or warm blankets. Craftier people are said to be paying bribes to get out of quarantine.

One person held in a quarantine facility in Varzob, just outside the capital, Dushanbe, uploaded footage showing how around 45 people were packed into a crowded sleeping area, forced to sleep in beds pushed up against one another.

“We are willing to remain in quarantine, but there is no water here and the toilets are in a terrible condition. If they say that coronavirus is passed from one person to another because of poor hygiene, how are we supposed to observe hygiene when there is no water here? Here the risk of getting a virus is even higher,” one woman filmed in the footage says, speaking to camera.

Neighboring countries, Kyrgyzstan and Uzbekistan, which have both had coronavirus cases, have imposed restrictions of varying severity on public transport. In Tajikistan, packed buses are still running, carrying people to still-operating bazaars.

Only one or two laboratories are in theory able to perform tests for coronavirus – the assurances of the authorities on this front are not always credible. And there are varying figures about how many kits are available. RFE/RL’s Tajik service, Radio Ozodi, in February cited officials as saying that Russia had provided 2,000 kits.

Eurasianet contacted officials to ask about updated test figures and was told only that there were enough kits to go around. The issue may be, however, that it so far only people showing obvious symptoms that are tested.

Tajikistan has received some assistance from the international community to resist an onslaught that may or may not have already arrived.

Germany has donated 1 million euros ($1.1 million) to pay for the purchase of personal protective equipment, medical equipment and training to combat the spread of COVID-19. The Asian Development Bank gave $100,000 for the same purpose. WHO and USAID gave protective equipment in kind for protection of hospital staff.

If Tajikistan’s sheer isolation has not been enough to keep it safe, the prospects will be bleak, however.

Ramziya Mirzobekova, a Tajik journalist, believes that if the virus enters Tajikistan, the situation could become worse than in Italy.

“If Italy cannot cope because they are short of human and technical resources, then we have absolutely nothing. What we do have is in short supply. And there is no saying that we have enough specialists to go around,” she told Eurasianet.

The slender hope some are grasping is that the president, who is closely guarded and typically steered far away from most forms of physical harm, appeared unfazed enough by the coronavirus crisis to undertake his weekend tours.

“He apparently wants to demonstrate that everything is under control. But we should still be adopting some measures. Better to be safe than sorry,” Mirzobekova said.