Questions will be asked why this announcement came so late. 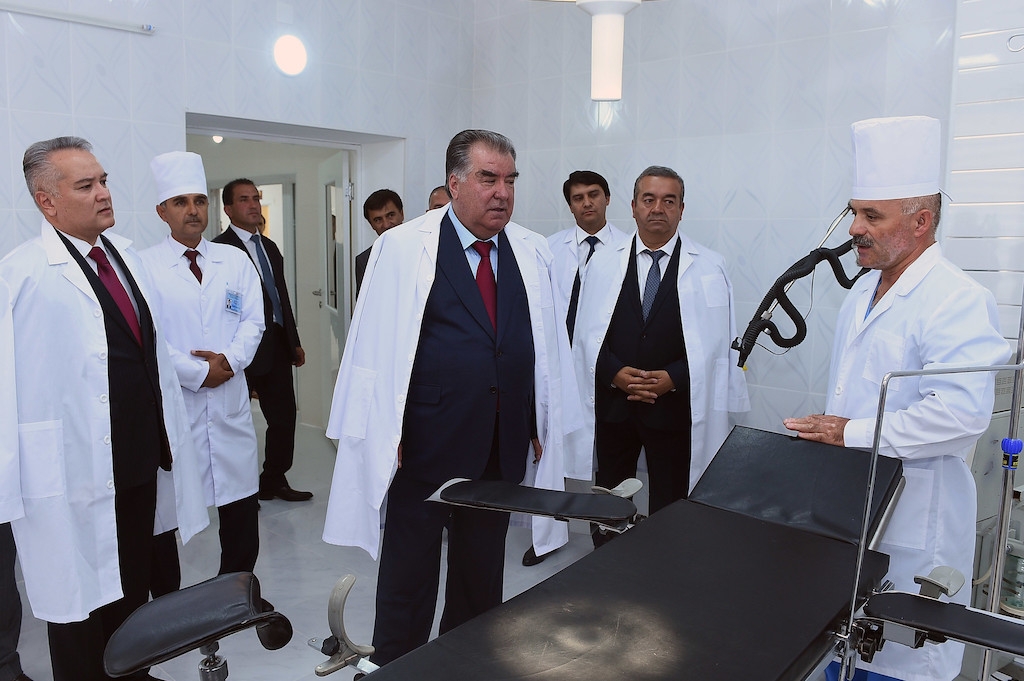 Doctor-in-chief: Rahmon has not been seen since April 17.

Tajikistan’s prime minister confirmed on April 30 that the nation’s health authorities have detected their first 15 cases of coronavirus, finally ending a concerted campaign of denials that the pandemic had reached the country.

Prime Minister Kohir Rasulzoda said at an emergency meeting of the Coronavirus Pandemic Prevention Committee that five cases were in Dushanbe and the other 10 in the northern Sughd region.

The announcement has come just ahead of the arrival of a World Health Organization expert mission, which is traveling to Tajikistan to help the government assess readiness for coping with a COVID-19 outbreak.

Public skepticism has been mounting for weeks about the Tajik government’s insistence that the country had managed to keep the coronavirus pandemic at bay. Suspicion has been sparked in particular by a surge of reported cases of a respiratory illness that health officials have attributed variously to pneumonia, or in some isolated cases even tuberculosis, H1N1, or tonsillitis.

The bullish tone has changed of late, though.

Rasulzoda announced on April 25 that schools would be closed until at least May 10. Theaters and cinemas will be closed, football games suspended and there are to be no mass gatherings until instructions to the contrary. In recognition of correlated food security risks, Rasulzoda also ordered a ban on the export of wheat, rice, lentils, peas, mung beans, eggs, potatoes and meat of all kinds. Units of Interior Ministry personnel have been dispatched across the capital and beyond to carry out disinfection of government buildings, sidewalks, streets and parks.

WHO officials expected to travel to Tajikistan on April 30 said they were heartened by preparations made so far by the authorities to prepare for an outbreak.

“We know that Tajikistan has now 22 hospitals that are dedicated and prepared to receive patients. They have already dedicated 3,000 beds in place,” Dorit Nitzan, a health emergencies coordinator for the WHO, said at an online press conference on April 30.

Questions are bound to be asked, however, about why the cases announced by Rasulzoda have only been discovered and revealed at this stage. The geographical spread of known cases indicates that the outbreak has extended across large distances and in disparate and mutually isolated areas of the country, suggesting that the virus has been in the country for some time already.

The Khovar state news agency has reported that between February 1 and April 30, nearly 11,000 people have been placed in preventative quarantine. Of that total, 8,438 were discharged without showing signs of ill-health. More than 2,000 are still under observation.

The WHO has to date appeared to validate Tajik insistence that the coronavirus was not present.

Nitzan told reporters that 26 test samples were sent by Tajik health authorities to international WHO reference labs in Russia and the United Kingdom and that they had returned negative results.

Failure to institute precautionary measures in good time will have enabled the outbreak to take a stronger footing than might otherwise have been the case. In defiance of detailed pleas from the WHO, the authorities in late March held major festivities to mark the Nowruz spring holiday.

The announcement on detection of the COVID-19 cases was left to Rasulzoda, who occupies a relatively low ranking in the elite pecking order, despite his title. President Emomai Rahmon, meanwhile, has not been seen in public since April 17, although he did deliver a televised speech on April 23 to extend holiday greetings to the public on the occasion of the start to Ramadan.