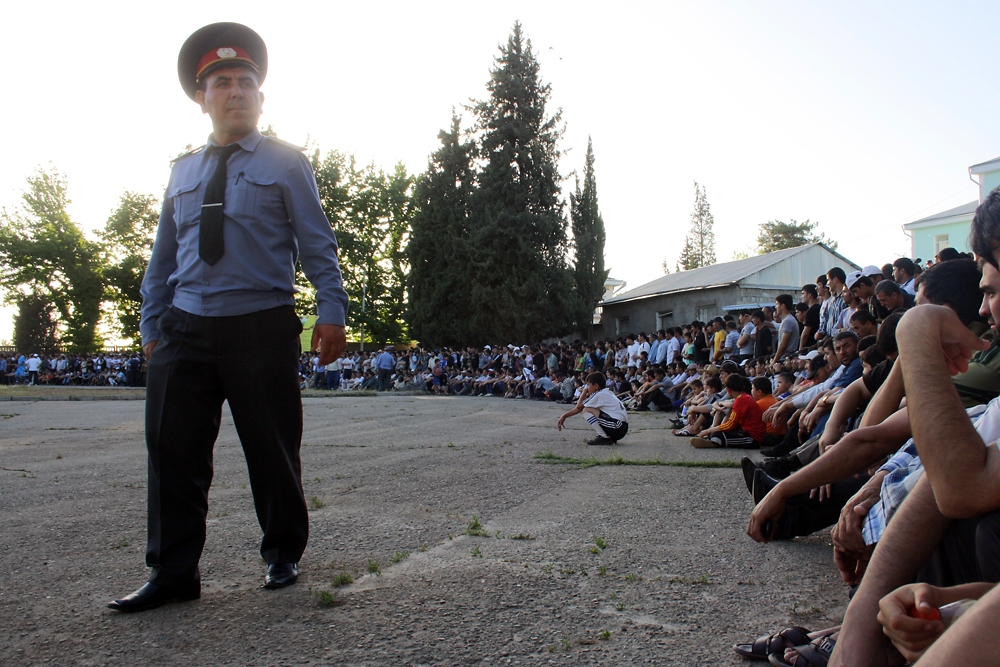 Police keep an eye on fans during the controversial first game between Tajikistan's football title challengers Istiklol Dushanbe and Ravshan Kulyab in Dushanbe on May 1. (Photo: EurasiaNet)

It’s not uncommon for football fans to get emotional about the outcome of a match. But in Tajikistan, an authoritarian-minded country where public protests are rare, a recent wave of post-game rioting has exposed anger over more than just a final score. Though the rioters articulated no political or ideological views, there are signs that the outbursts -- sparked by two matches where referee decisions favored a team run by the president’s son -- are linked to discontent with rampant corruption and unemployment.

Rival teams Ravshan Kulyab and Istiklol Dushanbe first met this year on May 1. That game, in Dushanbe, ended acrimoniously after Istiklol scored a late winner from a disputed free kick. A mass brawl ensued between both teams’ supporters.

On June 14, Ravshan Kulyab again lost to Istiklol Dushanbe, last year’s undefeated league champions, this time at home in Kulyab. Again the game was decided in the final minutes when referees called a disputed, last-second play in favor of Istiklol. The team is said to be owned by Rustam Emomali, President Imomali Rahmon’s 23-year-old son, who also plays as a striker and is the team captain.

“The goal was clean but no one trusted the referee. After all, he referees the majority of Istiklol’s games,” said a Ravshan fan who attended the game. As the referee blew the final whistle, fans flooded the field and clashed with police, players and officials. Making the confrontation even more surprising, Kulyab is considered the president’s home turf.

The police fired their guns into the air, but, according to the Ravshan fan, people had already “started throwing stones. An assistant referee was hit and after that no one was afraid.” In the ensuing violence, which appears to have targeted the president’s son, fans attacked the Istiklol team bus. A Ministry of Interior press release, reprinted by the Asia Plus news agency, said that 100 supporters threw stones at police officers. Sixteen people were injured and at least 20 were arrested. Witnesses believe thousands were involved. In response, the Tajik Football Association fined Ravshan and forced the team to play its next five home games outside of Kulyab.

But fans were not pacified.

On June 23, Ravshan Kulyab faced CSKA Pamir in Dushanbe (CSKA stands for Central Sport Club of the Army, a Soviet-era acronym). Though Ravshan won, fans again took to the streets. Dushanbe residents suspect the rioters were using the opportunity in the capital to protest their treatment by the football association, where Rustam Emomali is vice president. (Emomali is often touted as a successor to his father. He has sat on the political council of the ruling People's Democratic Party and was recently appointed head of the customs department tasked with fighting smuggling).

“The police fired their automatic weapons into the air and at the ground in an attempt to disperse the crowd,” a local witness told EurasiaNet.org. “I was in the middle, police on one side and fans on the other. The authorities were hitting protestors with batons and arresting anyone they could get their hands on. I saw four or five cars destroyed and 15 or 16 people taken away by the police.”

Despite uncertainty over who was behind the unrest, it is clear that the riots – and a June 15 demonstration against an allegedly corrupt judge in Khorog – have attracted the government’s attention. Naturally, recent uprisings against corrupt regimes in the Arab world have an “influence” on Tajik politics, says political analyst Abdugani Mamadazimov. Government officials are looking for ways to “secure themselves, to prevent a similar situation here,” he told EurasiaNet.org.

On June 15, in the midst of the football unrest, legislators proposed increasing punishment for “hooligans.” The president signed the new law on June 28; it went into effect immediately. Explaining the new legislation, Shavkat Saidov, assistant speaker of the National Assembly, told the Avesta.tj news agency that “organizers and participants in unsanctioned rallies, meetings, demonstrations, pickets and marches will be fined or face up to two years in prison.”

Previous legislation only specified fines, never prison time, for these types of offenses.

For Mamadazimov, the former head of National Association of Political Scientists, the reasons for the protestor’s anger are simple: “unemployment, no hope, no future.” Ultimately the riots “signal that everything is not good in the country,” he said.

“It was not about football … it was about politics,” said the eyewitness to the Dushanbe riots. “Everyone is afraid of Rustam [Emomali, the president’s son]. The officials, the players, the owners, and the supporters have had enough. It was like a test, to see how the authorities would respond.”