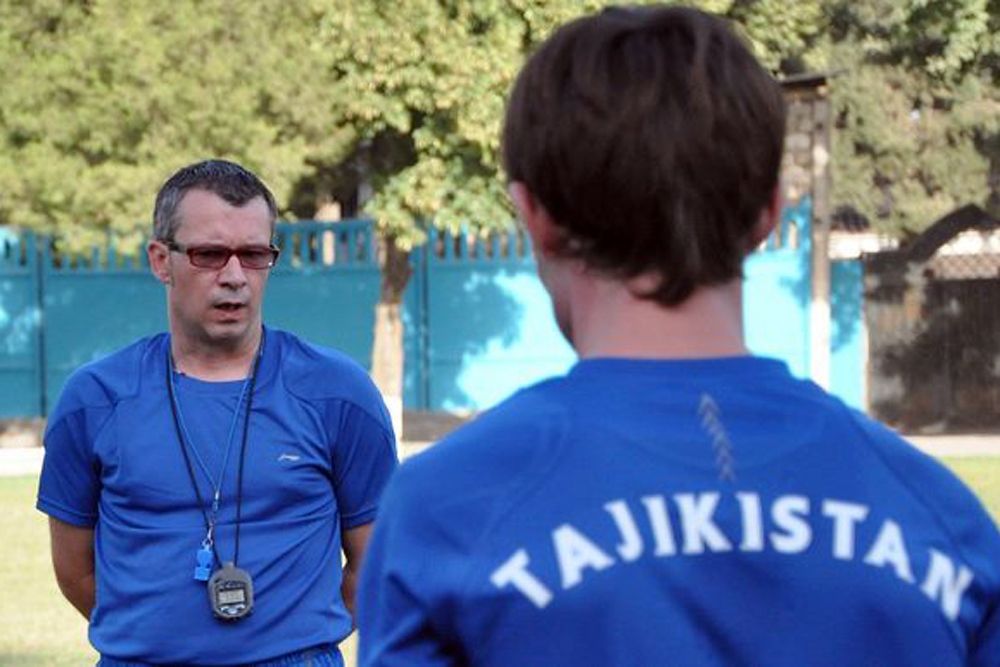 Was Kavazovic a victim of poor coaching or politics? (Photo: nikolakavazovic.com)

The French writer and philosopher Albert Camus reportedly once said, “Everything I know about morality and the obligations of men, I owe it to football.” Camus obviously never saw how the Beautiful Game is played in Tajikistan.

Everything you need to know about the state of football in Central Asia’s poorest state is encapsulated in an incident that occurred September 6, 2012. In one of the most significant football victories for the country since it gained independence in 1991, the Tajik national team defeated Qatar on that day, 2-1, in a friendly match played in Ingolstadt, Germany. While the result may not have been as odds-defying at the United States’ 1-0 victory over England in the 1950 World Cup tournament, it still qualified as a major upset. The funny thing was the vice president of the Tajik Football Federation, Azizbek Rajabov, was AWOL for the game. Although Rajabov accompanied the Tajik team to Germany for the friendly, he reportedly skipped the game itself in order to make a quick shopping trip to Italy.

“He thought that we were going to be defeated,” recalled Nikola Kavazovic, a Serb and former national team head coach.

Another illustrative event occurred just a few weeks ago during a Tajikistan Cup semifinal match played in early October. In the game, Ahtam Hamrokulov scored twice for Regar-TadAZ against Vakhsh, the club for which he had played two years earlier. Hamrokulov also happened to have a home in Qurghonteppa, where Vaksh plays its home matches. As reported by RFE/RL, when Hamrokulov returned to that residence after the match, he encountered city officials, who, in an apparent fit a pique over his goal-scoring prowess against his former team, accused him of not paying his water and electricity bills. Despite his protests that he had made regular payments, officials proceeded to cut the water and power to his home. Service was restored only after Hamrokulov complained to Rustam Imomali, the president of the Tajik Football Federation and son of Tajikistan’s long-time president, Imomali Rahmon.

Kavazovic had a front-row seat for lots of wackiness during a six-month stint as national team coach that ended in March 2013. Prior to that, he had a more than year-long coaching run at FC Istiqlol, a perennial powerhouse club in the Tajik domestic league. Kavazovic enjoyed mostly success while coaching in Tajikistan, but good on-the-field results did not stop him from being fired in short-order from both coaching jobs.

“FC Istiqlol management fired me after a defeat against Ravshan Kulyob, 1-0. That was my first club defeat after 13 months!” he noted.

During his tenure as national team coach, the squad registered three victories against two defeats, a respectable achievement given Tajikistan’s lowly worldwide FIFA ranking of 142nd when he took the helm of the squad. The national team currently stands at 117th in the FIFA rankings. While leading Istiqlol, which is based in the capital Dushanbe, the club captured the 2012 AFC President’s Cup, a prestigious Asian trophy, given to the winner of a sort of Champion’s League for emerging nations in the region.

As Kavazovic tells it, he was ostensibly let go as national coach earlier this year because the team failed to qualify for the Asian Federation Challenge Cup. But the real reason his contract wasn’t renewed, he maintains, was that he wanted to shake-up the status quo in Tajik football, something that the game’s governing authorities in Tajikistan couldn’t countenance.

“They want to remain closed, without progress,” Kavazovic said. “Tajikistan is a great place to work and live in if you don’t want to use your own head and brain. When you start thinking differently, just pack your bags and say goodbye.”

Rustam Imomali, the Tajik Football Federation’s 26-year-old chief, is President Rahmon’s eldest son and someone widely seen as a potential presidential successor. He is “surrounded by the wrong people who make decisions instead of him,” said Kavazovic. “He really loves football, but he doesn’t have enough experience and knowledge for such a position.”

The lack of qualified personnel at the top is hindering the development of skilled players, and is preventing clubs from reaching their full potential in international competitions, Kavazovic contends. To cite an example, he pointed to FC Istiqlol’s experience following its triumph in the 2012 AFC President’s Cup. “Just two months after that incredible triumph, the president of the team, Sohruh Saidov, sacked seven players from that squad,” Kavazovic said.

He asserted that neither financial nor disciplinary issues prompted the player moves. Instead, he alleged that Saidov came under pressure from other oligarchs who run clubs in the Tajik domestic league to dilute Istiqlol’s talent level. Istiqlol at that time was consistently beating its domestic league opponents by lopsided scores, and Saidov’s rivals wanted the games to become more competitive: rather than make their own clubs stronger, they somehow compelled Saidov to weaken Istiqlol.

“When a Tajik side gets some success there is always someone who pulls the team, or the entire movement, back to the bottom,” Kavazovic said. “They [club operators] want a Roman circus. … And if a team becomes too strong there is no more pleasure.”

The Tajik governing body, he continued, is reluctant to give a coach any genuine authority to run the national team. “The trainer of the national team always signs a six-month contract,” he said. “How can you expect to plan a better future for the Tajik national team if you have … only six months? If a national team wants to develop … you have to be able to make a long-term plan.”

A statement issued to EurasiaNet.org by the Tajik Football Federation attributed Kavazovic’s dismissal to the failure of Tajikistan to qualify for the AFC Challenge Cup 2014. Tajikistan finished second to Kyrgyzstan in group qualifying, thanks to a 1-0 loss to the Kyrgyz squad in the head-to-head match. The Tajiks missed out on qualifying as a second-place group finisher, thanks to poor goal differential.

The statement went on to ascribe Kavazovic’s disparaging comments about the Tajik federation to sour grapes. “The slanderous words of Kavazovic about the Tajik Football Federation and its leadership … are nothing but emotion [coming] from a person whose pride has been hurt,” the statement said.