Officials sticking to insistence it has registered no cases of coronavirus. 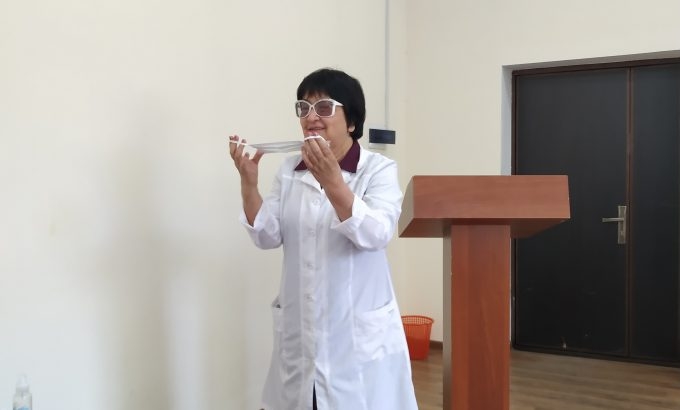 An instructor teaching medical students of the Tajik National University about precautions to be adopted during a possible COVID-19 outbreak. (Photo: Health Ministry)

Health officials in Tajikistan’s capital on April 22 reported four more deaths that they have attributed to pneumonia.

The government has denied, however, that it has so far detected the presence of COVID-19 cases in the country and has ascribed what appears to be a surge of pneumonia cases to poor weather. The representative office of the World Health Organization, or WHO, in Dushanbe has, meanwhile, lent its support to denials, saying that negative tests for coronavirus are credible.

Asia-Plus news agency cited Khurshed Rustamzoda, director of Dushanbe city hospital No. 1, as saying all the people who died were male and aged over 60.

A source for the outlet said that more than 100 people are currently hospitalized as pneumonia patients. “Three of them are in serious condition,” the source said.

Eurasianet has learned that one of the people who died on April 22 was Khurshed Karimov, who worked as a physical education teacher in a school for gifted children.

Clear and reassuring information is difficult to obtain, though, and the country’s leadership has given often-contradictory guidance.

Tajikistan does have a history of intense pneumonia outbreaks. Asia-Plus cited the Health Ministry as saying that that 12,802 people were diagnosed with the pulmonary infection in 2019. The ministry did not say how many people had died.

There was slightly more clarity from the northern Sughd region, which has also registered a spike of pneumonia cases.

“In a three-month period in 2020, 24 people died with pneumonia in the cities and districts of the region, compared with 17 in the same period in 2019,” the deputy head of the Sughd regional health department Maruf Khojiboyev told Asia-Plus on April 21.

It was unclear to which three months Khojiboyev was alluding, and the figure would be of limited use if covering only the first quarter since many pneumonia-attributed deaths have occurred in April.

Insistence that coronavirus may not have arrived in Tajikistan was seemingly bolstered last week by WHO country representative Galina Perfiliyeva, who was cited by Khovar state news agency as saying that laboratory technicians tasked with carry out testing were highly qualified. As the time of her remarks, 2,317 coronavirus tests had been conducted – 440 of them were repeat tests. All returned negative results.

Khovar also cited Perfiliyeva as saying that media should stick to reporting only official information.

Officials have had adopted some quirky positions though.

“Keeping homes clean and observing sanitary standards is one of the finest qualities of our people. And especially in situations when all kinds of infectious diseases are spreading fast,” he said on March 22, urging listeners not to submit to panic. “Our health is, first and foremost, in our own hands.”

Deputy Health Minister Jamshed Shohidon later claimed that the apparent spike of pneumonia cases was due to adverse weather conditions – excessive rain, to be exact.

One death one on April 19 was attributed by health officials to an even more eye-opening candidate – H1N1, or swine flu. Health officials said that Jaloliddin Abdujabborzoda, an employee at Dushanbe prosecutor’s office, had been tested for coronavirus and that the result had been negative.

A well-placed source at the National Bank has since informed Eurasianet on condition of anonymity that around 30 members of staff who work together with relatives of Abdujabborzoda have been placed in preventative quarantine.

The effectiveness of the testing regime is far from certain either.

Hatija, a resident of Dushanbe in her 20s, told Eurasianet that she went to the Sanitary Epidemiological Surveillance Service in Dushanbe – one of two facilities in the country equipped to performed tests – after she developed a temperature and felt pain in her lungs. Staff at the facility said she was not eligible for a test as she had not recently traveled abroad or been in contact with foreign nationals, she told Eurasianet.

Hatija said she later sought further medical advice and was, after being given an X-ray, diagnosed with pneumonia.

Tajikistan’s behavior has been contradictory even in preparation for an outbreak that it says has not yet arrived.

It has readily accepted personal protective equipment from countries like China, Russia, the United States, and organizations like the WHO and the European Union.

On April 22, however, a plane owned by privately owned airliner Somon Air flew out of Dushanbe carrying 800,000 protective masks destined for medical workers in Italy. A company called Javoni in the northern city of Khujand has committed to dispatching a total of 11 million masks to Italy.