The election was a pro forma exercise. 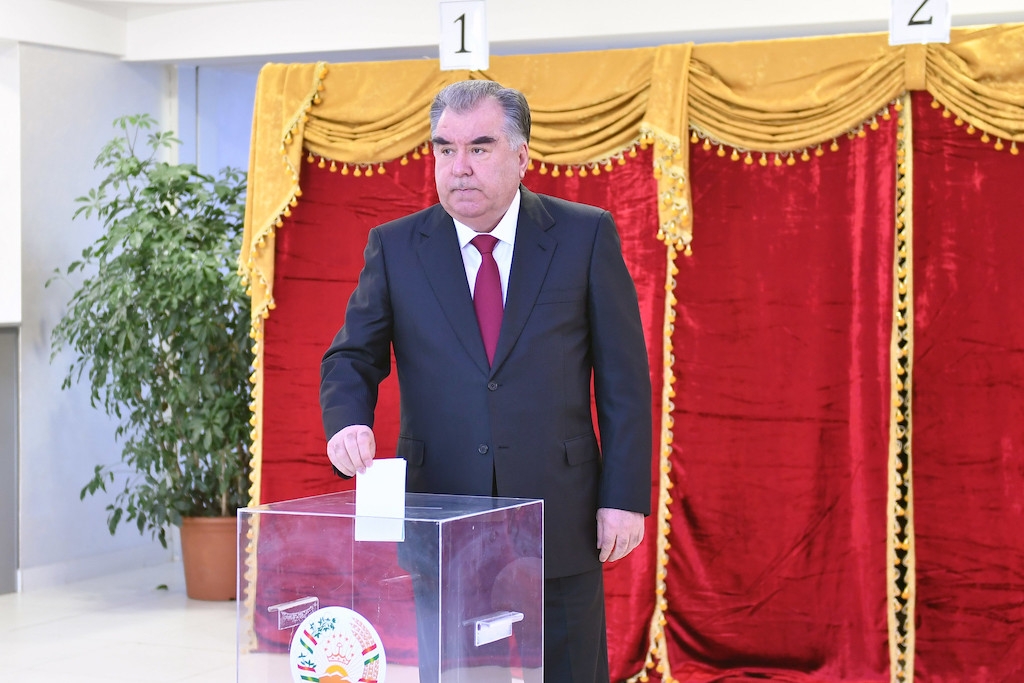 One man, many votes: President Emomali Ramon seen, unlike many of his compatriots, casting only one ballot at a time. (Photo: Presidential administration)

Election officials in Tajikistan announced on March 2 that the ruling People's Democratic Party of Tajikistan, or PDPT, won a landslide in the weekend’s fraud-ridden parliamentary election, claiming 50.4 percent of the vote.

This result appears to confirm expectations that the March 1 polls were to be a rote exercise in ersatz democratic procedure largely intended to refresh the mandate of the authoritarian regime. These were the first parliamentary elections to take place since the Islamic Renaissance Party, or IRPT, once considered the country’s most credible opposition force, was banned in 2015.

The other parties that qualified for seats in parliament are puppet bodies and have accordingly refrained from criticizing the government. The runner-up in terms of votes cast was the Party of Economic Reforms, with 16.61 percent. Other parties that got into parliament were the Agrarian Party, with 16.5 percent, the Socialist Party, with 5.15 percent, the Democratic Party of Tajikistan, or DPT, on 5.1 percent, and the Communist Party, which got only 3.1 percent of the vote, but secured a seat in a single-mandate district.

The Social Democratic Party, or SDPT, a hugely under-resourced and historically harried contender, fell far short of the 5 percent threshold needed to get any of its five candidates into the legislature, garnering only 0.3 percent of ballots cast.

According to official data, more than 4 million voters cast their ballots, although there is no way of being certain about the accuracy of that figure. Officially endorsed election fraud seems to have been widespread.

Some additional skepticism may be generated by an article published by Prague-based website Akhbor, which reported hours before the official results were announced that only 1.4 million people had voted. That number would have put turnout under the 30 percent threshold required to make the election valid.

The website also claimed to have been leaked returns by a well-placed insider showing only three parties qualifying for parliament – the PDPT, with 56 percent of the vote, the SDPT, with 29.5 percent, and the Communist Party, with 6.5 percent. These alleged results, however, strain credulity.

Even under the highly policed conditions of this election, there have been numerous allegations of violations. These have mainly involved claims of multiple or family voting, whereby one person casts many ballots on behalf of many people.

The Central Elections Commission said it had received no reports of ballot box-stuffing.

But some people were even caught on camera in the act of multiple-voting in footage that was later posted online. One woman who posted such footage on Facebook told Eurasianet on condition of anonymity that she deleted the video within the day on March 1 after she was summoned to the offices of the State Committee for National Security, or GKNB, the successor agency to the KGB.

Asia-Plus newspaper tested the system by having a reporter attempt to vote on behalf of several members of his family. The precinct officials handed over the ballots without protest.

“I voted for everybody, and then I dropped all the ballot papers in the box, and nobody, including the observers, seem at all bothered,” the journalist said.

In another case, a precinct officer told a voter that they would give them multiple ballot papers, but only as soon as television cameras left the voting station.

Shukhrat Kudratov, a lawyer and member of the SDPT, observed voting in the Tajik Embassy in Moscow. He wrote on his Facebook account that he saw voters being bussed in and being instructed by embassy staff on whom to vote for. Ballots were passed to people who had not produced their passport, he wrote.