Media have speculated that a clampdown on smuggling may be the cause. 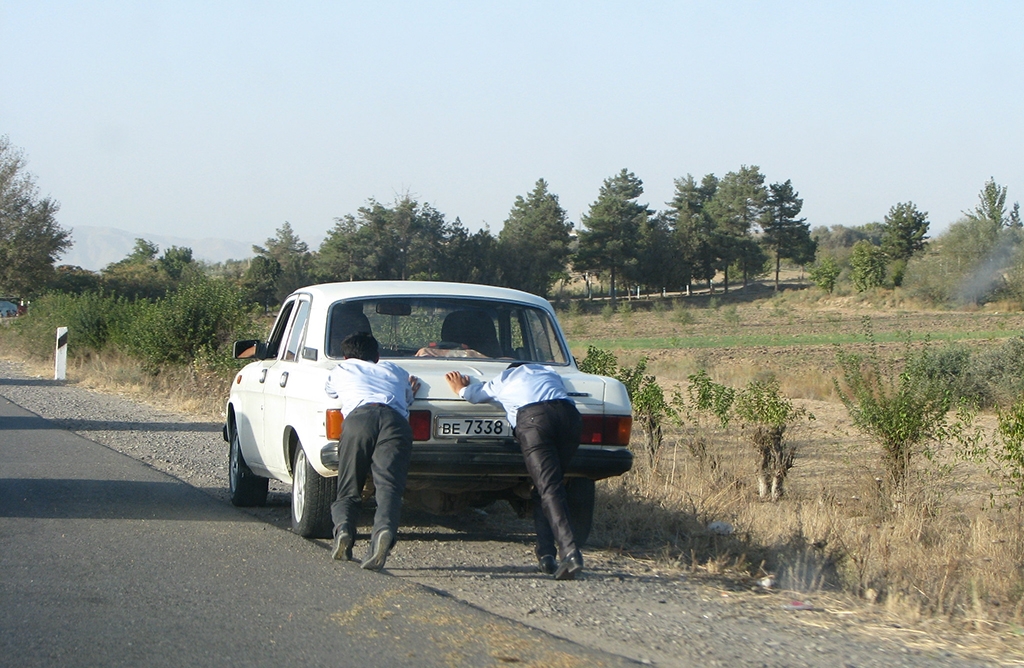 Time to get out and push: Motorists are finding it harder to get a full tank. (Photo: Tim Griffin / Creative Commons)

The price of the most sought-after grade of automobile gas in Tajikistan increased by nearly half over the past week. And even then, it has become ever more impossible to find.

“I went to three gas stations and found gas only at one. The gas stations do not know when to expect a new delivery,” said 42-year-old Dushanbe motorist Nodir Hasanov. He bought a full tank.

If AI-92 gasoline cost 6.5 somoni ($0.57) per liter last week in Dushanbe, the price is now 8.1 somoni. In Khorog, the administrative center of the Gorno-Badakhshan Autonomous Region, or GBAO, gasoline sells at 9.30 somoni per liter.

Determining the cause of this price rise is not easy.

The fuel business is one of many to have been all but monopolized by a senior representative of the ruling family. Namely, Shamsullo Sohibov, son-in-law of President Emomali Rahmon.

Sohibov’s Faroz holding company went into liquidation a couple of years ago, but its network of gas stations is still largely intact. The way that the gas stations are operating is bound to be part of the explanation.

But the authorities are pointing to the shortfall in supplies due to the country’s key fuel provider suspending exports. RFE/RL’s Tajik service, Radio Ozodi, quoted a specialist at the state antimonopoly service, Rajabali Mahsiddinzoda, as saying that Kazakhstan supplies 90 percent of Tajikistan’s fuel and that those exports have been halted since January.

This is borne out by reporting in Kazakh media. Business newspaper Kursiv notes that power outages at the start of the year led to decommissioning of equipment at its Atyrau refinery. Authorities there have resolved as a result to focus on building up reserves for the domestic market, the paper reported.

Fuel price rises are a seasonal development too. The government in Russia, whose fuel market invariably has knock-on effects throughout the region, has similarly reported marginal increases.

Dushanbe newspaper Asia-Plus has another intriguing theory, though. The outlet has speculated that fuel smugglers operating along the border with Kyrgyzstan are struggling to get their wares through. No explanation is offered for why this might be happening.

Kyrgyzstan enjoys gas prices around 40 percent lower than in Tajikistan because it receives the bulk of its needs directly from Russia. The returns for resellers who can get past border controls is accordingly substantial.

Asia-Plus estimates that around 30 percent of Tajik fuel and lubricant demand is met by this contraband channel. As the outlet provides no source for this information, however, it is not possible to be certain as to its reliability.