Authorities have named the five figures they say run the underworld in GBAO. 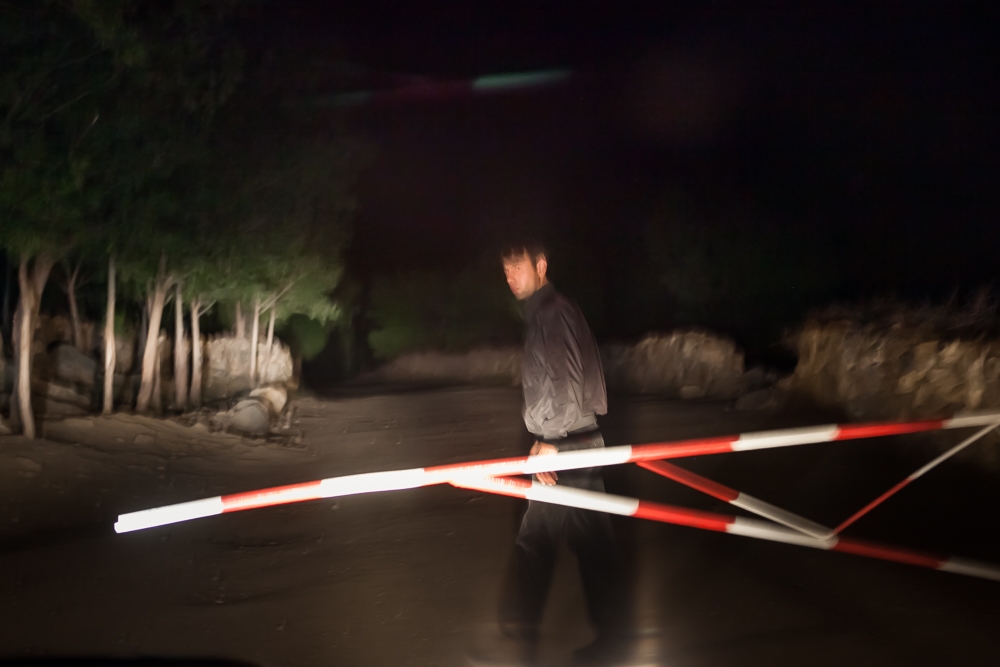 A checkpoint during an earlier security operation in GBAO. (Photo: David Trilling)

Authorities in Tajikistan ratcheted up tensions in the eastern Pamirs region over the weekend by naming the targets of an ongoing security sweep, describing them as leaders of criminal gangs. The figures named have fired back by rejecting the accusations aired on state media.

In a piece published on the Khovar state news agency website on October 20, five individuals were identified as the “leaders of organized crime groups” — an apparent declaration of intent to move against people who were formerly alluded to in public statements, but rarely named outright. On October 22, RFE/RL’s Tajik service, Radio Ozodi, reported that the five men — Tolib Ayombekov, Yodgor Mamadaslamov, Mamadbokir Mamadbokirov, Khursand Mazorov and Munavvar Shanbiyev — went in person to the prosecutor’s office in Khorog, the capital of the Gorno-Badakhshan Autonomous Region, or GBAO, to ask on what grounds they had been described in those terms.

“We consider ourselves guiltless. The accusation from the authorities, that we are members of an organized crime group, are groundless,” Ayombekov told Ozodi.

There is no indication any attempt was made to detain the men, all of whom are variously described as smuggling kingpins or unofficial community leaders.

In the October 20 Khovar report, security officials stated that they had confiscated at least 186 firearms, including 72 automatic rifles and two grenade-throwers, from armed groups under the control of the five men.

GBAO has been on edge since September 15, when President Emomali Rahmon used his presence in Khorog to dress down top security officials over what he described as a state of lawlessness in the region. He then gave officials a one-month deadline to neutralize the “five or six criminals” he said were at the root of the region’s ills and implied that more robust measures might be required if he was dissatisfied with the results. That deadline came and went last week.

The October 16 security briefing reported by Khovar over the weekend appeared to be intended as a status update to reassure Rahmon that his expectations had been partially satisfied, but anxieties are growing rather than easing.

In an October 19 interdepartmental security meeting devoted to the situation in GBAO, the region’s recently appointed acting head, Yodgor Faizov, took a notably combative and at times bizarre line, declaring that he was undaunted by the challenge of confronting the informal Pamiri leaders.

Tajikistan does not divulge information about the size of its standing army, but it is safe to assume that the real figure is vastly lower than the estimate proffered by Faizov.

If Faizov, who has for some years headed the Aga Khan Foundation in Tajikistan, a development agency that plays a vital role in sustaining the minuscule economy of the GBAO, appears to be playing Dushanbe’s tune by adopting a harsh tone, other remarks indicate he is eager to dissuade the central government from taking extreme measures. Addressing Rahmon, who was not present, he stated that “Khorog is not a place for war” — an implicit confirmation that an intensified security operation is in the cards.

“Even without all this, people have many problems. They come to me to talk about their problems — they have no jobs, they live in garages. If there is war, where will this leave the people?” he said.

Faizov also said that he had asked Saimun Yatimov, the head of the State Committee for National Security, or GKNB, to withdraw weapons from GBAO.

But at the same October 19 meeting, Yatimov made it clear that government efforts to neutralize the offensive potential of Pamiri leaders was far from complete.

“We know everything. The 170-180 firearms they gave up is only 10-15 percent of their arsenal. But not one bullet, not one Makarov pistol, not one machine gun will help them. If they do not hand over all their weapons, if the criminality continues, we will take legal measures,” he said.

The pressure has already been applied to at least one close relative of one of the men named as the government’s main targets. State television in GBAO has reported that among the five men detained on October 15 for refusing to submit to police orders at a checkpoint a few kilometers outside Khorog was Tolib Ayombekov’s nephew, 21-year-old Abdurahmon Ayombekov.

As Asia-Plus pointed out, Abdurahmon Ayombekov’s father, Okil, was in 2012 sentenced to a lengthy jail term, along with Tolib Ayombekov’s driver, Hamza Murodov, on charges of murdering the head of the local GKNB, Abdullo Nazarov.

Following that killing, Tolib Ayombekov, who was commander of a Pamiri border detachment at the time, was accused by the government of being the head of a tobacco and gem smuggling operation. Government troops then attempted to detain Ayombekov and other so-called informal leaders but their efforts proved unsuccessful despite bloodshed. Following negotiations, Ayombekov and others were allowed to remain at large — a situation that Rahmon now appears determined to remedy.