Tajikistan: Has the president’s son already taken over?

President Rahmon has kept a low profile, leaving his son to take the lead. 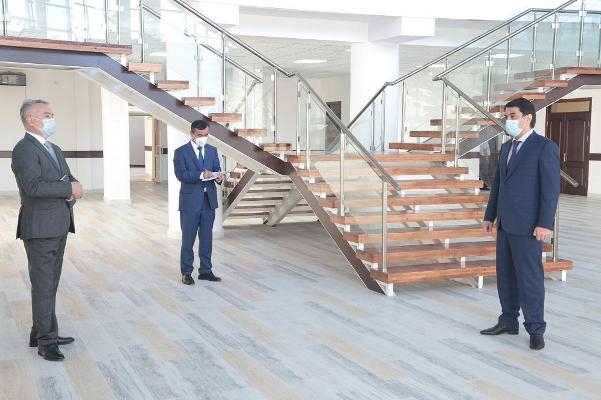 Tajikistan is now fully engulfed in its own COVID-19 crisis, but the man who ostensibly runs the country has performed something of a disappearing act.

President Emomali Rahmon has barely been seen since April 17, when lawmakers anointed his son, Rustam Emomali, as the likely successor by making him the chair of the upper house of parliament. The speaker of the Senate is constitutionally required to take over the helm in the event of the president being unable to perform his duties or suddenly stepping down.

In effect, however, this may be academic since Emomali, the son, who is also the mayor of the capital, Dushanbe, appears to be taking ownership of the crisis.

As of May 5, five people have died in Tajikistan with COVID-19. The number of confirmed cases is 293. Many suspect that those are lowball figures. Many of the hospitals in the country are said to be full to capacity and turning away new patients.

On May 4, Emomali was shown by state media acquainting himself with preparations at a temporary hospital being readied to admit coronavirus patients. Up to 3,000 spots should be set aside for the treatment of sick people, he said, noting that illegal construction sites in Dushanbe could be appropriated for the purpose. The mayor's office has said earlier that there are 30 hospitals in the capital with a total of 5,284 beds.

Emomali – the Tajik custom is for sons to take the name of the father as their last name – is rarely seen out and about on formal duties without his father present.

This has sparked many, largely fanciful so far, theories about the president’s well-being. Much lively chatter was aroused earlier this week by the appearance in Dushanbe and departure to Germany’s Ramstein Air Base of an executive Gulfstream jet. Opposition figures abroad volunteered that this was possibly evidence that Rahmon had fallen ill and was being taken for treatment abroad, although this seemed like just wishful thinking on their part.

In apparent reaction to this speculation, the president’s advisor, Abdujabor Rahmonzoda, gave an interview to Khovar state news agency on May 5 reassuring the public that Rahmon was “at his workplace and thinking about how to improve the situation.”

His thinking so far has extended mainly to firing Health Minister Nasim Olimzoda. He was replaced by the head of a Dushanbe hospital, Jamoliddin Abdullozoda. The president also got on the phone with his Uzbek counterpart, Shavkat Mirziyoyev, which would seem to put paid to suggestions that he is incapacitated.

Suspicions about the coronavirus affecting the country’s leadership are not without basis, however, given quite how wide the virus has spread.

Rahmatillo Zoirov, the leader of the embattled opposition Social Democratic Party, wrote on Facebook on May 9 that he had entered his eighth day with the illness. The brother of the deputy Justice Minister is understood to have died with COVID-19.

Most alarmingly for the Rahmon regime, Prague-based website Akhbor reported that 14 officers with the State Committee for National Security, or GKNB, the successor agency to the KGB, are among the infected. They included the head of the border service, Rajabali Rahmonali, according to the website’s sources.

Earlier in the week, it emerged that the deputy head of the ruling People’s Democratic Party of Tajikistan, Khairinisso Yusufi, had also been diagnosed with coronavirus.

Although the government has received dozens of millions of dollars in financial and in-kind support from foreign governments and international organizations, considerable momentum is now going into egging people into donating their salary to the COVID-19 cause. The initiative began with President Rahmon’s pledge on May 1 to forego a month’s pay, the exact size of which is not public information, but many other officials have since invoked that example to do the same. The chairman of Istiqlol football club said he would donate a whole year’s salary. The head of state-owned Amonatbank, meanwhile, urged all his staff to give up one day’s pay.