Until last year, ethnic Kyrgyz people were able to cross into neighboring Kyrgyzstan with their Tajik passports. Now they must first travel to a third country, an option few can afford. 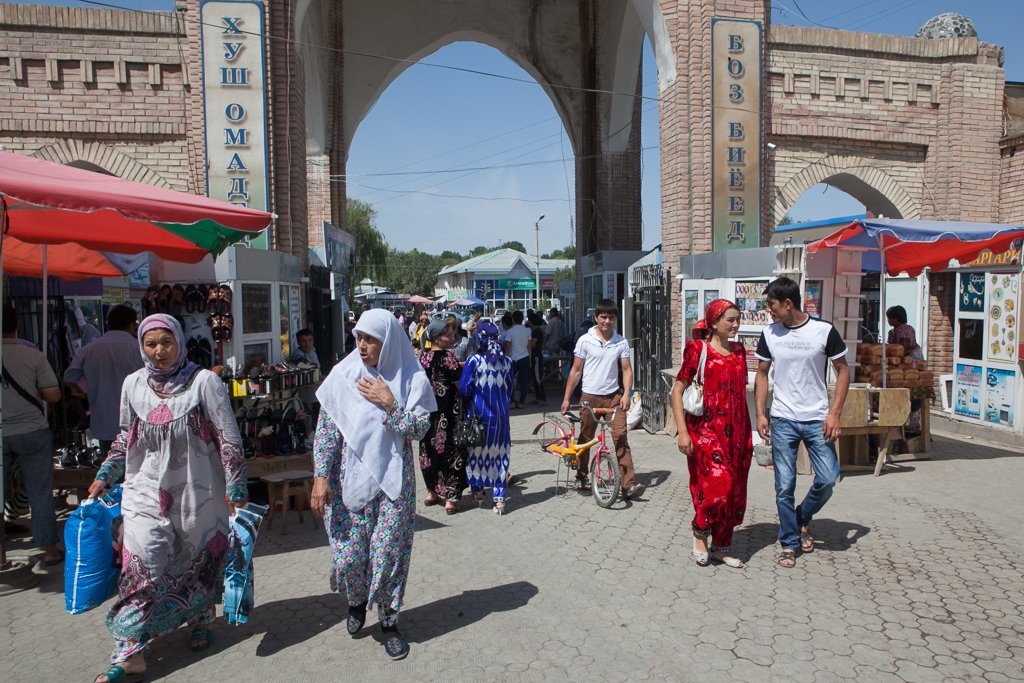 The bazaar in Isfara (David Trilling)

Ziyoda Yakhshibayeva, 45, an ethnic Kyrgyz living in northern Tajikistan, has not seen her son and daughter-in-law for two years.

They live in the capital of Kyrgyzstan, Bishkek, and getting there has become difficult for Yakhshibayeva.

The predicament is the product of border tensions. Following a bout of fighting in the spring of 2021, both governments all but shuttered overland frontier crossings, instantly killing petty trade and causing heartache for families.

There are countless thousands in Yakhshibayeva’s situation.

A mounting number of ethnic Kyrgyz people are looking to leave Tajikistan. It is mostly the older generation that is staying put across three Tajik areas – Isfara district in the north, and the highland Lakhsh and Murghab districts, further to the east.

According to the latest available figures, there are 65,000 ethnic Kyrgyz in the country, although intercommunal tensions in recent times means that number is now almost certainly far smaller.

Yakhshibayeva was born and raised in the Isfara district village of Dakhanakul. She graduated from a teacher-training college in the northern Tajik city of Khujand in Soviet times and then return to live and work in her home village. And that is where she has to stay.

“A year ago, I buried my father. That means I have nobody with whom to leave my mother. I cannot leave. Mom wants to be buried next to her parents and her husband,” she told Eurasianet.

Her children were unprepared to make the same commitment. They managed to secure Russian citizenship by living there for a period, and they now live in Bishkek.

“The thing is that if you get Kyrgyz citizenship, then you have to give up your Tajik citizenship. They could only have come to Tajikistan as visitors, which would have meant having to go through the trouble of getting registered and so on. That is why they settled on Russian citizenship,” Yakhshibayeva said.

Ethnic Kyrgyz people are to all intents and purposes marginalized in Tajikistan. They have little role in public life; anybody that can leaves for Kyrgyzstan or Russia for a better life. If there were many villages a decade ago that were entirely Kyrgyz, that is less often the case today.

The isolation of those communities has been deepened by the recurring unrest on the contested perimeter along the far southwest of Kyrgyzstan and the northeast of Tajikistan. And it is getting worse. Every time violence flares, heavier weaponry is used, sentiments grow more bitter. In this September’s fighting well over 100 people, from both sides of the border, were killed.

The breaking point arrived in 2021. Until that time, ethnic Kyrgyz people were able to cross into neighboring Kyrgyzstan with their Tajik passports. Now people like Yakhshibayeva’s son can only reach his mother by first going to a third country, which is an option he can faintly afford.

“Before, we saw each other several times a year. They came to us, and we went to them. At least now you can communicate through instant messengers,” Yakhshibayeva said.

Yakhshibayeva takes pride in her work at a school where pupils from many ethnic backgrounds study – an increasing rarity in Tajikistan. Children switch from Tajik to Uzbek, and Kyrgyz to Russian, and they all understand one another, she said.

But there is no getting around the fact that every cycle of trouble adds more poison.

“At times like these, my mother gets afraid when I leave the house, or when someone unexpectedly knocks at the door. She is afraid that […] they might insult me, because I am Kyrgyz,” she said.

When unrest rears its head, Kyrgyz communities have little option but to keep a low profile and wait it out. Relying on mainly Kyrgyzstan-based media, they read dramatic accounts of alleged Tajik cruelty, which only exacerbates the anxiety.

One 70-year ethnic Kyrgyz women from Dakhanakul, who is being identified by the pseudonym Bibigul to preserve her anonymity, said in tears that she feels like she is between two flames.

“I grew up in this country. We broke bread with the Tajiks. How is it that Tajiks and Kyrgyz are now killing each other? I’ve never wanted to leave. I want to be buried next to my parents when I die. My children are afraid that we might be attacked. They ask me to move, to come closer to them, in Kyrgyzstan or Russia,” said Bibigul.

Bibigul’s retired husband used to work in government service. She too was a teacher. Recently, shortly after the last bout of border clashes, her husband went to the city to fill up his car with gas. A passerby muttered something about how he was Kyrgyz, that he shouldn’t be served, Bibigul recalled.

“It’s good that someone recognized him and immediately stood up for him. They said that [my husband] had served the people of Isfara more than the Tajiks themselves had done. But my husband took it very badly. His heart ached and his blood pressure is up. For so many years, nobody ever brought up his ethnicity. But now it’s probably going to start,” she said.

The most tragic and frustrating tales about divided families are those involving relatives living immediately on opposite sides of the border.

Seven years ago, Cholpon and Abdukakhhor Isayev, who live in the Isfara district, married off their daughter to a young man in the neighboring Batken district of Kyrgyzstan. In the good times, it was no problem for them to get a car for a one-day visit. But following last year’s events, that stopped.

And now, they will never see one another again.

On September 16, a neighbor came to the Isayev’s home to show them video footage taken in Kyrgyzstan of a Porter van full of people fleeing fighting that had collided with a tank. Fully 12 civilians died in the crash.

“It was my daughter's family,” Abdukakhhor Isayev said. “They were being evacuated from their home in Batken. My daughter Elmira, my son-in-law Ulugbek, and two of our granddaughters were there.”

After the deaths, nobody got in touch to give them the news. They only managed to piece together the details through reporting on the internet.

“My wife is in shock, she’s speechless, she can’t stop crying,” Isayev told Eurasianet, just days after the crash. “We have no passports, no money to get them. We do not know how to cross the border, who to turn to for help. We just want to say goodbye to them.”