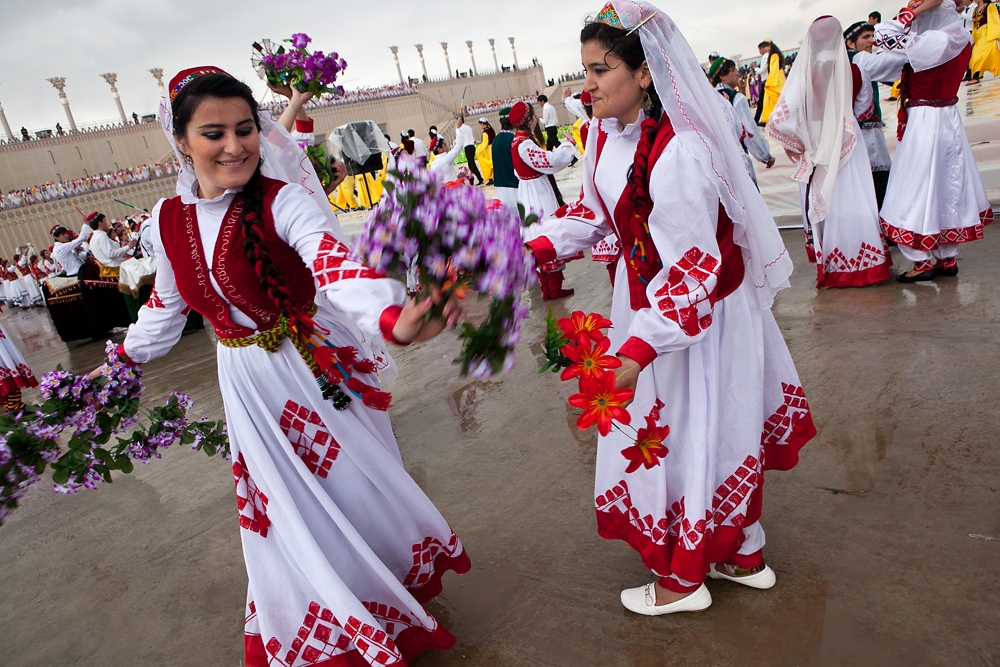 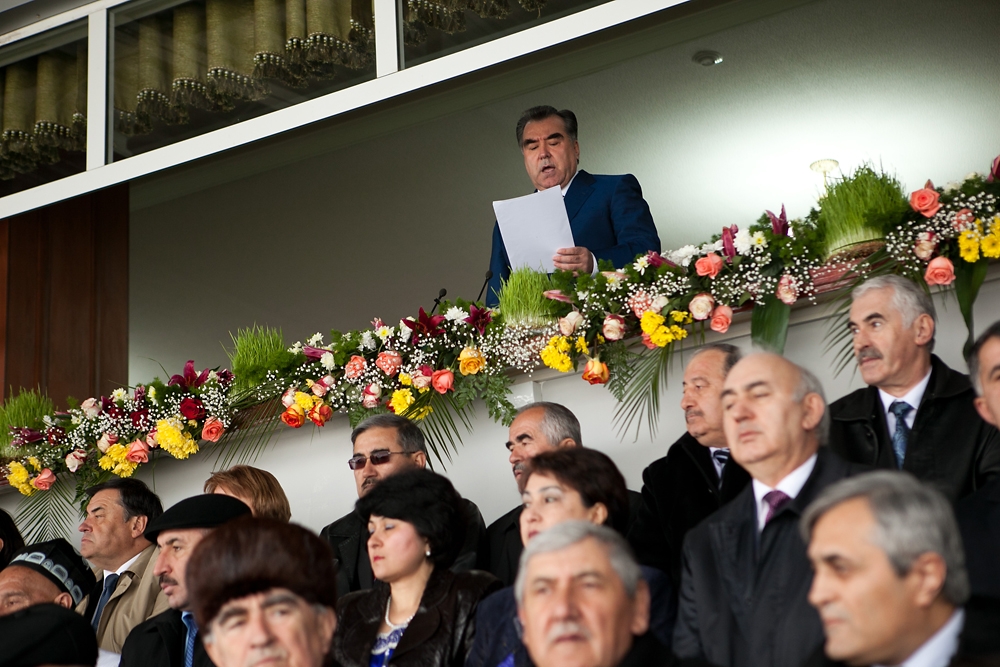 President Emomali Rakhmon gives a speech opening the Novruz festivities at the Dushanbe Hippodrome on March 25. 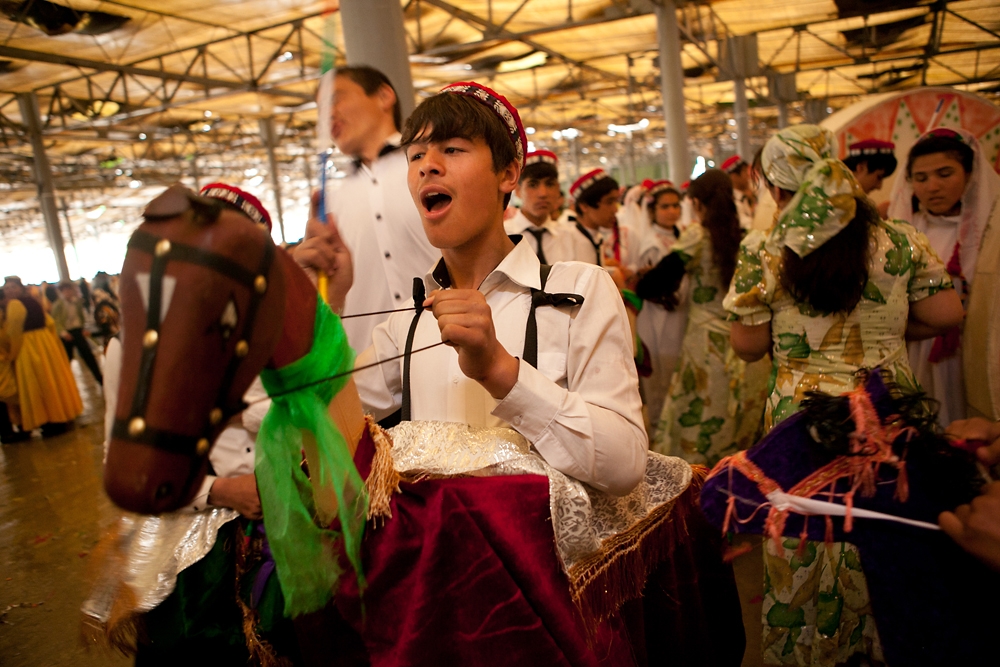 Dancers horse around backstage before performing at the hippodrome. 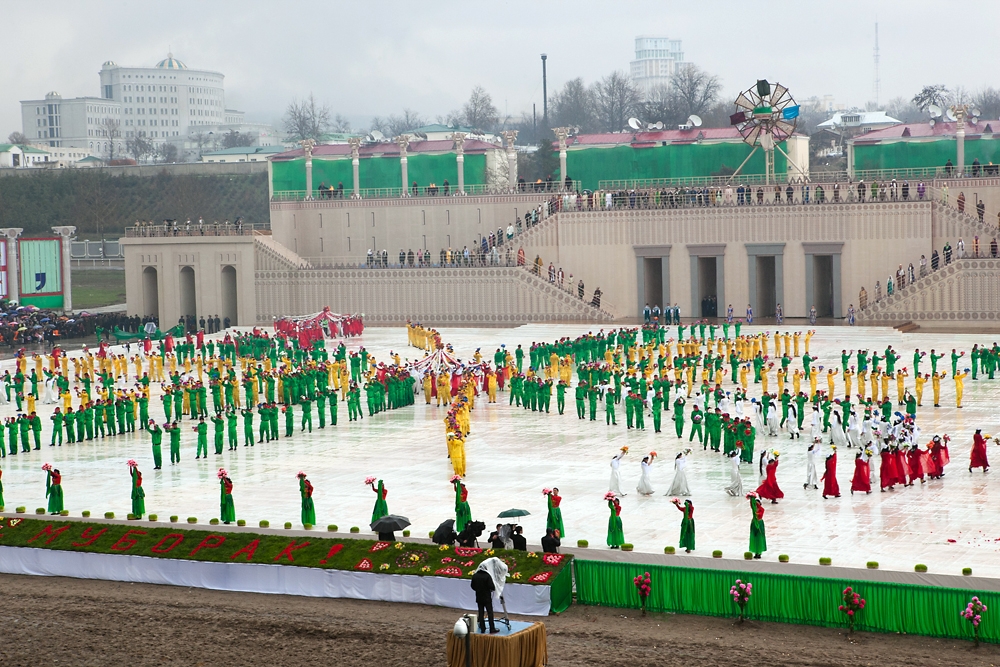 Ten thousand people took part in the performance, according to Asia-Plus. 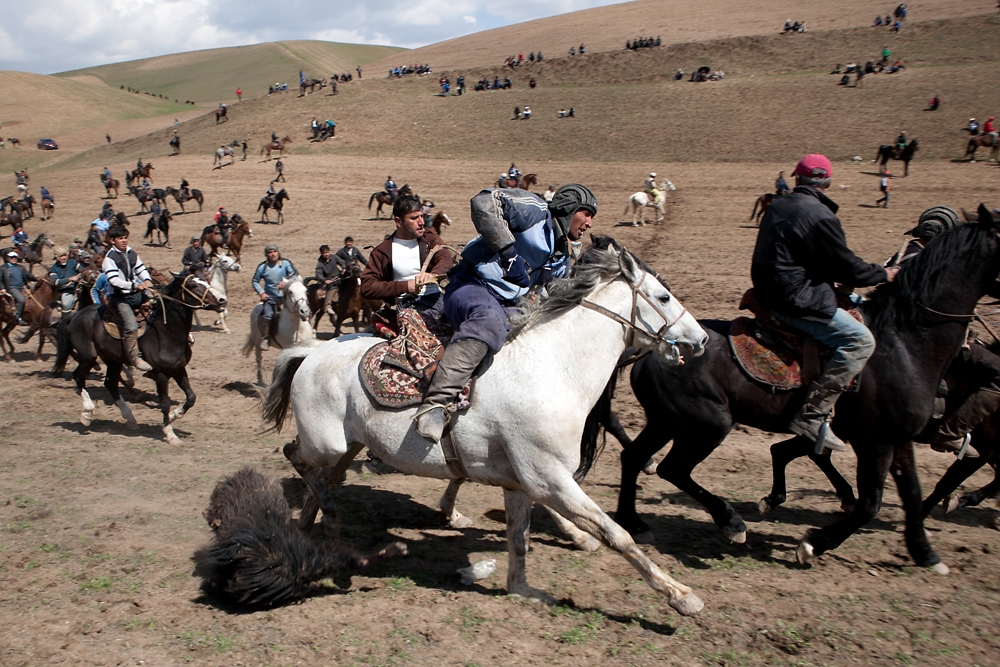 Spring is the season for buzkashi, a game popular across Central Asia, where men on horseback compete for a headless goat. 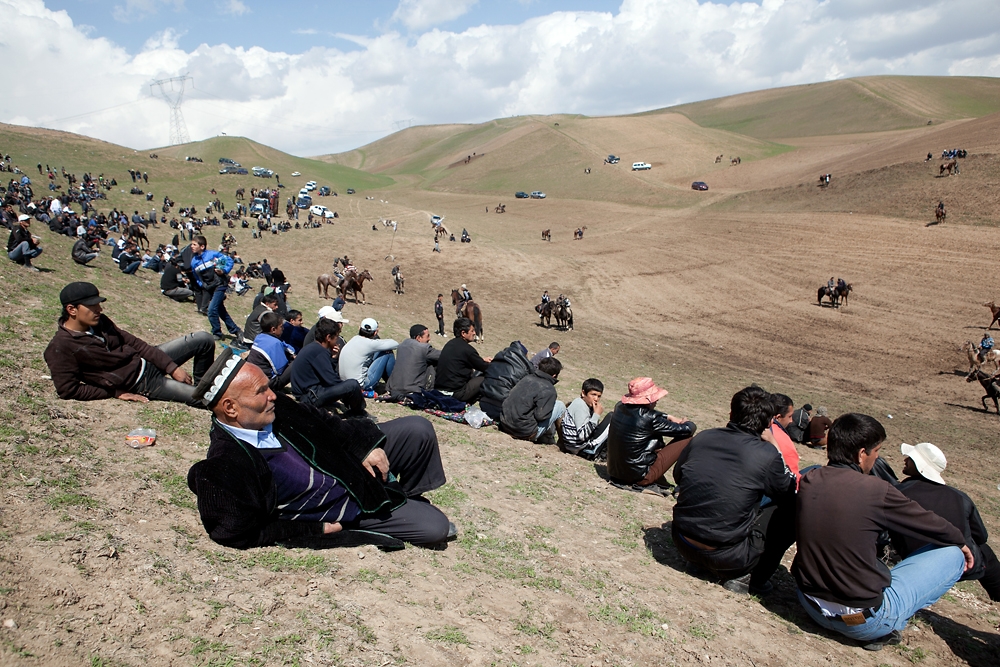 Men watch buzkashi at Shambari, about 20 kilometers from Dushanbe. 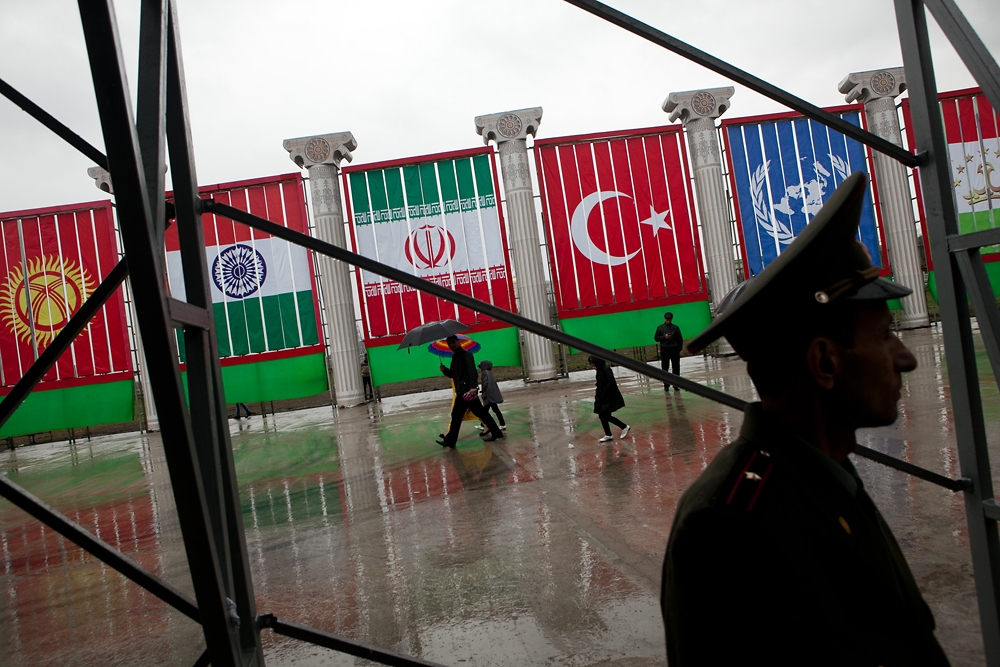 The "Third International Day of Navruz" included delgations from more than 30 countries. 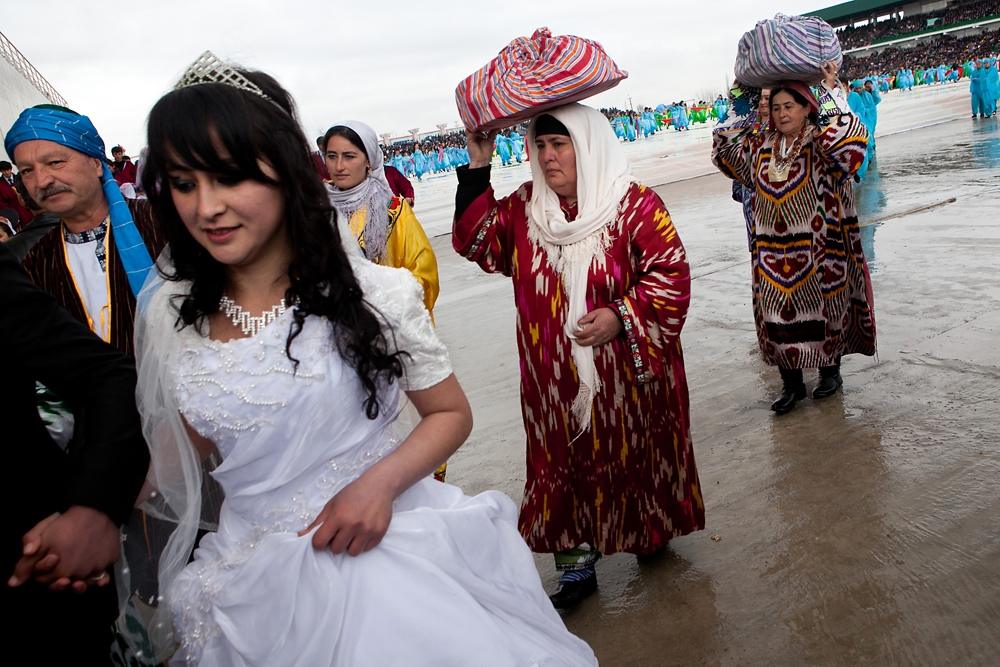 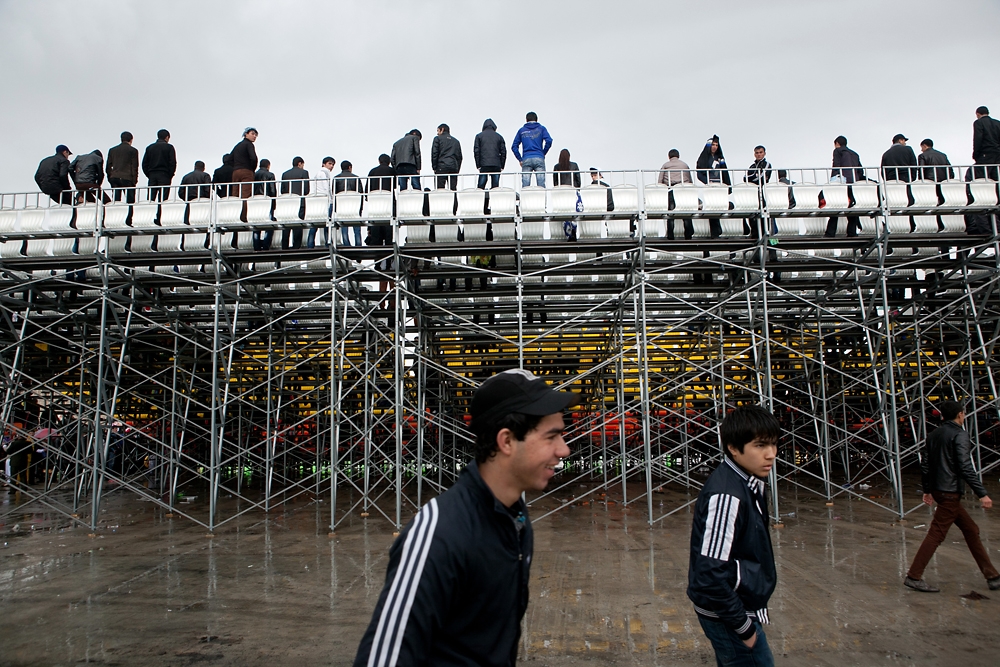 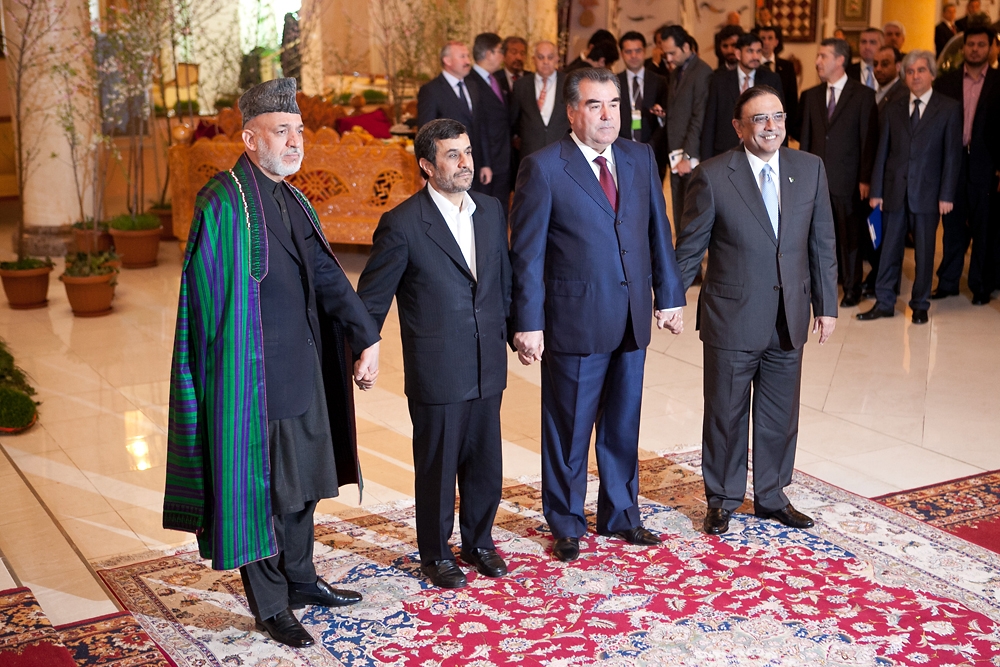 The presidents of Afghanistan, Iran, Tajikistan, and Pakistan met for the fifth RECCA on March 26. 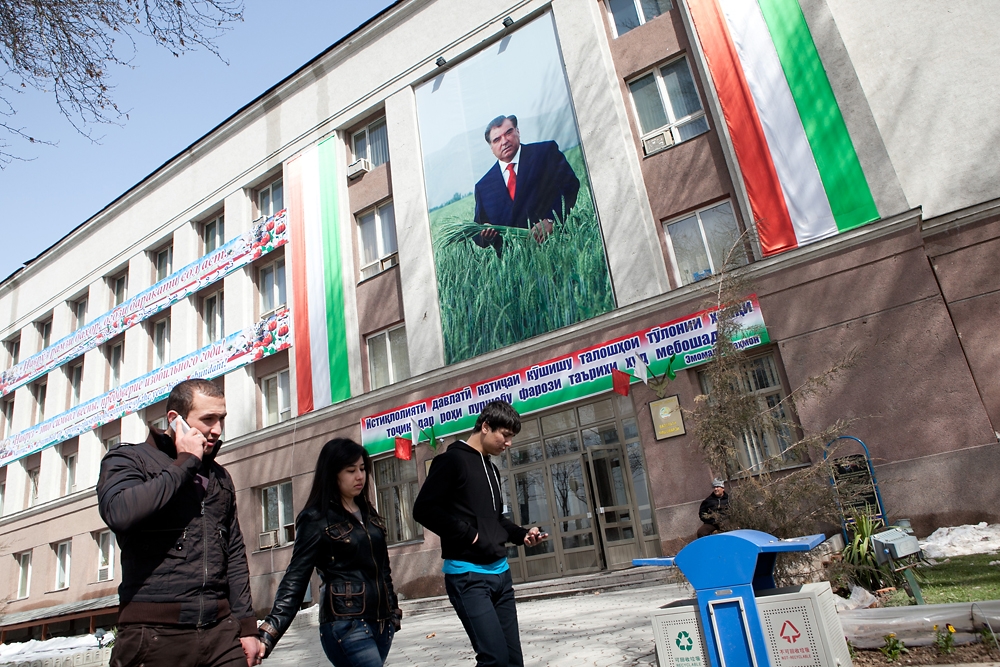 A photo of President Emomali Rakhmon standing in a wheat field adorns a building in central Dushanbe. 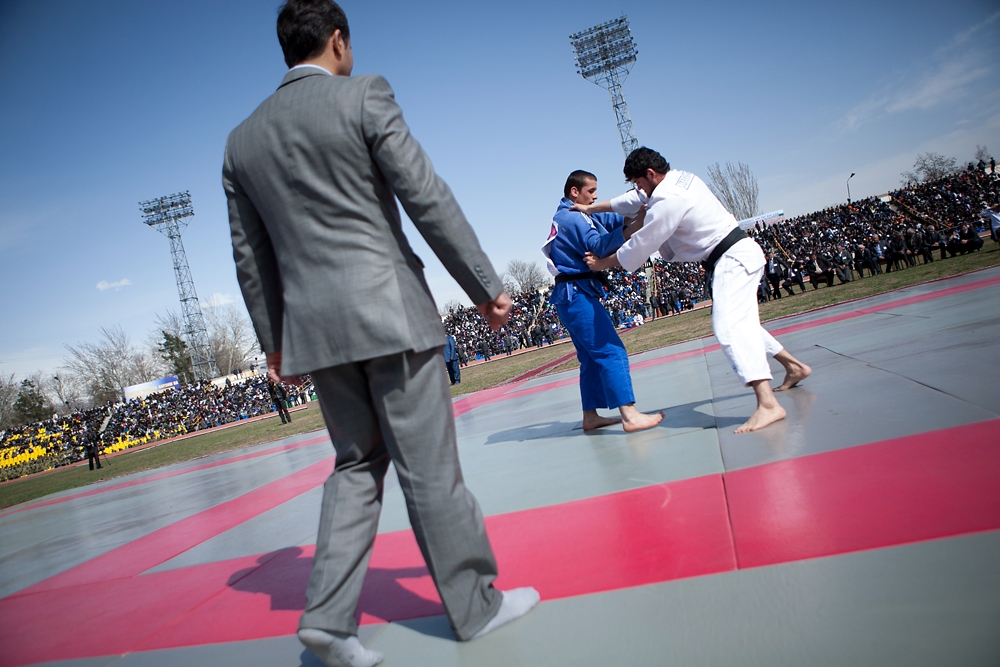 The festivities include a national wrestling competition on March 23. 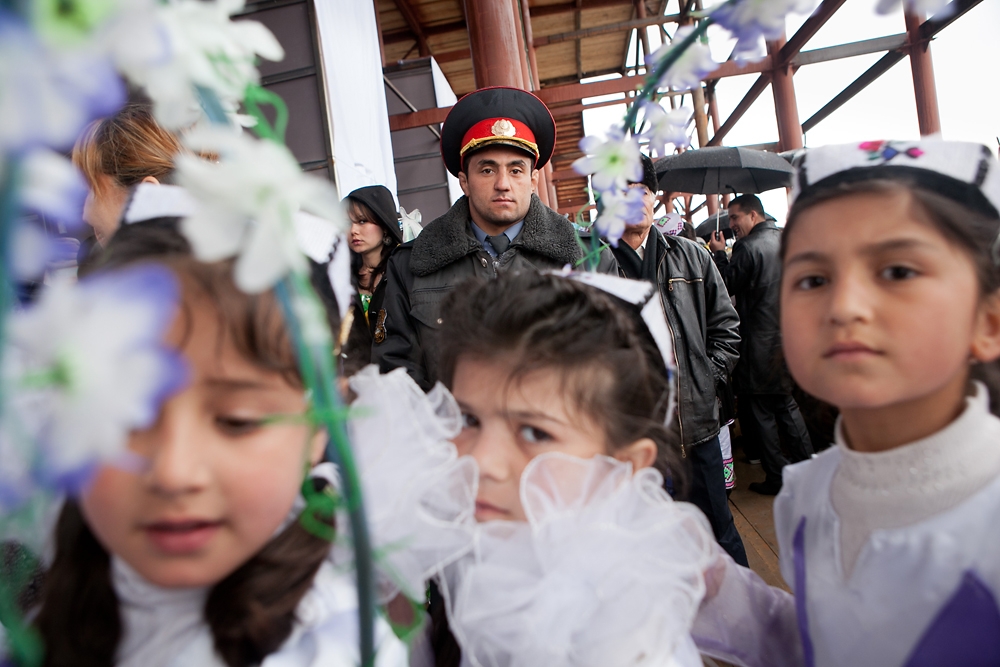 Around 4,000 school children danced at the keynote event on March 25, which had a heavy police presence. 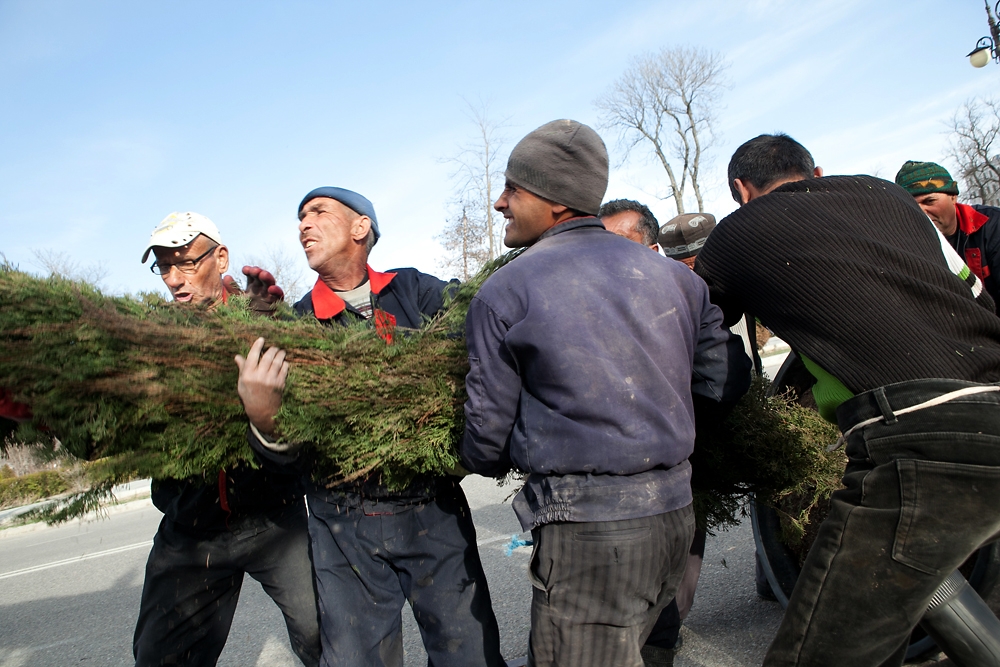 Men plant a new row of trees outside the president's palace in Dushanbe. 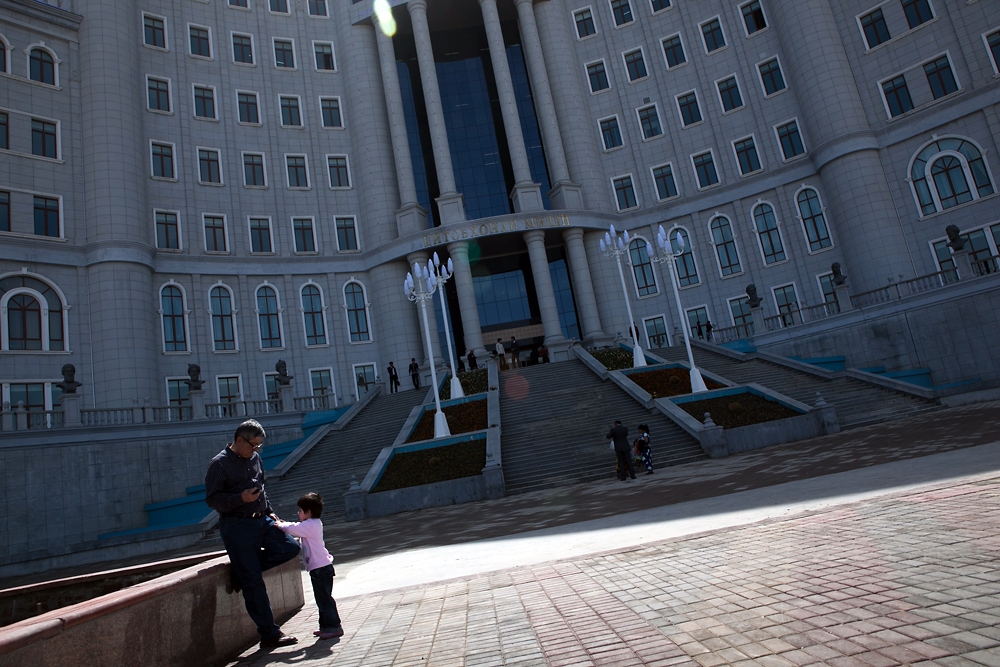 Navruz celebrations kicked off with the dedication of a new national library with space for 10 million volumes. 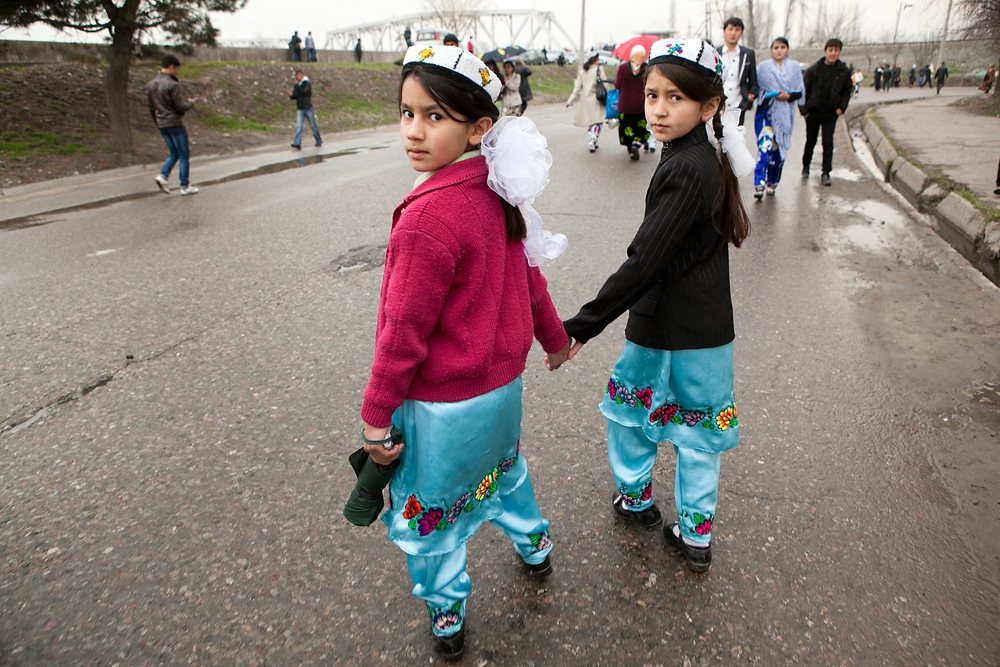 Girls walk towards the Dushanbe Hippodrome for the main events on March 25.
prev
next

Banned for much of the Soviet period, the festival of Novruz – also, Nowruz, Nawruz and a few other alternatives – derives its name from the Persian for "New Day" and marks the arrival of spring. The holiday, centering on the vernal equinox, is celebrated in much of greater Central Asia, as well as parts of the Caucasus and by Turkey's Kurdish minority, and is believed to have originated as the Zoroastrian New Year in ancient Persia. In 2009, it was added to UNESCO's List of the Intangible Cultural Heritage of Humanity.

In Tajikistan, the holiday has become part of the country's quest for a new, post-Soviet national identity. As in many former Soviet republics, that quest has involved turning to the distant, sometimes mythologized past. For Tajikistan, where the primary language is closely related to modern Farsi and the Dari spoken in Afghanistan, tapping into the lore of ancient Persia is a logical way to distinguish Tajiks from the Slavs and Turkic peoples of formerly Soviet Central Asia.

"Blessed Novruz is the greatest and most beautiful festival for the Aryan people," read banners quoting President Imomali Rahmon, displayed around the capital, Dushanbe. The ancient Aryans are believed to be forebears of today's Persian-speaking peoples: "Iran" is a Persian word for "land of the Aryans," and the ancient Greeks called the greater region including Afghanistan and present-day Tajikistan "Ariana."

The key official Novruz ceremony this year was held March 25 at the newly renovated Dushanbe Hippodrome. In his welcoming remarks, Rahmon steered clear of thorny current events. "The ancient and instructive history of our people demonstrates that our glorious ancestors celebrated Novruz as far back as several thousand years BCE," he said. "Novruz, as the immortal heritage of our famed ancestors, encompasses issues of morality, philosophy, worldview and high moral values, purity and goodness, justice and truth."

Security at the invitation-only event was even tighter than at other public venues. According to officials, representatives of over 30 countries were in attendance. Many were in town to participate in the 5th Regional Economic Cooperation Conference on Afghanistan (RECCA), which opened the following day with the presidents of Afghanistan, Iran and Pakistan present.

This year's celebrations seemed to require a fair share of state-managed resources. The holiday kicked off on March 20 with the opening of a new national library, reportedly at a cost of $40 million. The nine-story building with space for 10 million volumes towers over Dushanbe's central park. Outside, around the capital, and in towns across the country, local authorities organized singing, dancing and sporting events, covered by state television for hours each day. According to the Asia-Plus news agency, the hippodrome ceremony involved 10,000 performers. Of those, 4,000 were school children who had been practicing for over a month, while the others were college students, military servicemen, theater actors and circus performers.

The sporting events included a national wrestling tournament on March 23 and buzkashi matches, including one on March 26, some 20 kilometers outside of Dushanbe in the village of Shambari, where horsemen battled over a headless goat and cash prizes on a hillside crowded with spectators. The event was casual, with each rider competing for himself and the equine melee often charging into the crowd, sending men and boys scrambling for safety.

The public response to the holiday was mixed, with many having fun, while others saw the festivities as an extravagance that the impoverished country can't afford.

University students – young women wearing colorful robes and young men in suits – flooded the streets, eager to enjoy some sunshine after an especially harsh winter that saw many villages with less than two hours of electricity per day. The state electricity monopoly promised an uninterrupted supply of power for the holiday, though in some areas shortages continued. "These are our national dances," said one student at the hippodrome. "The world should see what we have achieved," she added, praising Rahmon for bringing peace and stability after the civil war.

Meanwhile, outside, some complained of the state's profligacy and unfairness. That feeling was aggravated when, during the RECCA conference, police repeatedly closed major thoroughfares in Dushanbe to permit high-speed motorcades to pass, thwarting some holiday-goers' plans to meet over the weekend. "We don't even have electricity," said one Dushanbe resident. "And the roads outside the city center are a mess. But the visitors will never know."