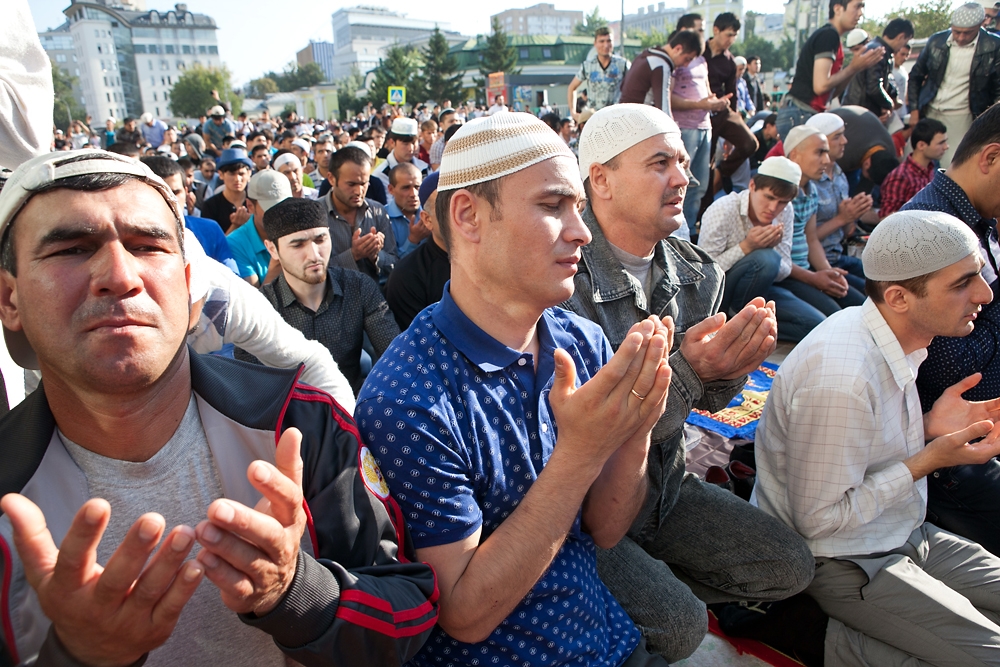 Away from home - and from the upcoming presidential election. (Photo: David Trilling.)

Anyone following Tajikistan’s presidential election cycle knows that Imomali Rahmon is a cinch to win another seven-year term on November 6. But the lack of genuine electoral options is a source of frustration for an important constituency – the million-strong community of Tajik labor migrants in Russia.

Tajiks working in Russia are estimated to make up at least one-quarter of the electorate. Though their remittances contribute the equivalent of almost half Tajikistan’s GDP, guest workers do not comprise part of Rahmon's base. Most have fled a relentless economic crisis to scrape out a living abroad, often toiling under dangerous and hostile conditions, far from their families.

In a competitive election, the vote of this migrant population could swing the outcome and would be something that politicians eagerly courted. But throughout the campaign authorities have kept the migrant population marginalized, its leaders complain.

In theory, Rahmon faces five challengers in the November 6 election. But critics say the other candidates are foils designed to give the election the veneer of legitimacy.

An interim report issued on October 22 by the OSCE’s Office for Democratic Institutions and Human Rights noted the incongruity of the campaign, saying that Rahmon is the only one campaigning and state media has “extensively and positively covered” the president’s activities. “There is no visible campaign by other candidates so far,” the report added. On October 29 at a televised event, dancers and children greeted Rahmon with the cry, “Long live the leader of the nation.”

The one potential candidate who could have mounted a credible challenge to Rahmon – well-known human rights activist Oynihol Bobonazarova of the Union of Reformist Forces – was unable to register her candidacy. Bobonazarova asserted that authorities harassed her campaign supporters, keeping her team from gathering the required number of signatures. Also, authorities did not accept signatures compiled among labor migrants.

The question of signatures has dogged the electoral process in Tajikistan for years. The Central Commission on Elections and Referenda (CCER) requires each candidate gather the signatures of 5 percent of the electorate; this year that equaled 210,000 citizens. But the CCER will not accept signatures from migrants because a local official cannot certify them. That posed a big problem for Bobonazarova because labor migrants are her natural base.

Before the 2006 election – which ODIHR said was marred by “substantial shortcomings” – the organization called the 5-percent signature threshold “excessive” and urged Dushanbe to drop the number to 1 percent, or do away with it altogether. Dushanbe ignored the advice.

Supporters were devastated by Bobonazarova’s failure to register. They lamented that even though she had little chance to topple the Rahmon machine, the way authorities kept her from running signaled that Rahmon’s administration isn’t interested in progress for the state, but merely wants to ensure its own survival.

After 21 years in power, Rahmon is the only recognizable politician for many Tajiks and would likely beat Bobonazarova in a fair election. But her candidacy got “people excited to vote. Everyone knew Rahmon would win – we knew the results would be falsified – but a very small hope would remain in our hearts,” says Izzat Amon, the head of the Union of Tajikistan’s Youth in Russia, a lobby group he says is 10,000-strong. Now none of his friends will bother voting in what he calls a “farce.”

Even if migrants want to vote, their options appear limited.

CCER spokesperson Parvina Rasulova told EurasiaNet.org there will be 24 polling stations scattered across Russia’s nine time zones on November 6, but could not give information about their locations, or how many voters each precinct could process. One young Tajik posing as a laborer called the CCER on behalf of EurasiaNet.org to find out where migrants could vote. He was told that Tajik officials in Russia would find him: "They know where Tajiks are located, and will be visiting places where Tajiks work," an official told him.

In Moscow, a Tajik foreman in charge of a crew of 100 Tajiks said he had no idea where to vote.

In response to complaints that 24 voting stations is insufficient for the 1.2 million Tajik migrants that Russia’s Federal Migration Service says are working in the country, Tajik authorities have accused Moscow of exaggerating the number of migrants.

That’s “nonsense,” says Temur Varqi, the Moscow-based editor of Safo TV, which broadcasts independent programing about Tajik migrants via satellite and the Internet. “Tajik authorities have no vested interests in opening up additional polling stations. It’s a hassle, and from the very beginning they just wanted to build a theater set. Why build an expensive one when you can do it on the cheap? They’re not even worried about legitimacy. What’s important to them is to say, ‘We set the rules and we’re in power.’”

Of course, not all migrants are anti-Rahmon and some will vote. But the way the electoral process has been handled confirms they should not hope for the kind of reform that could create jobs at home, says Varqi, who stresses that most migrants just want to go home: “They’re here to earn a piece of bread, not because life is so sweet here.”