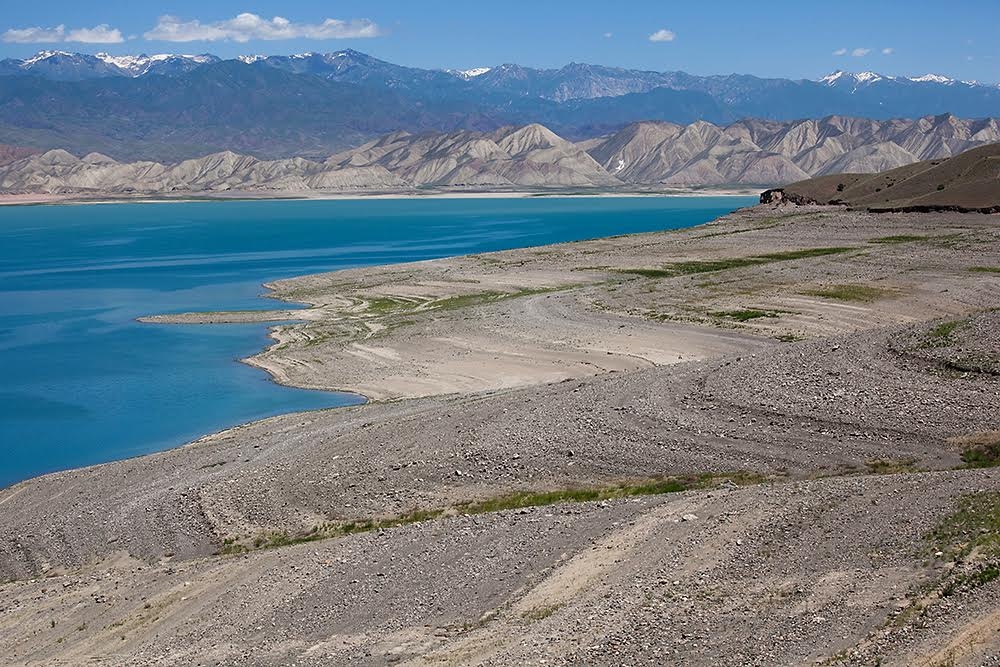 Bathtub-style rings show on June 11 where the water in Kyrgyzstan's main reservoir, Toktogul, used to reach in previous years. Though the water flow changes seasonably, and the level should be higher by fall, the reservoir has been unable to meet demand in recent years. (Photo: David Trilling)

The drying out of California is helping to highlight that efficient management of water resources is an increasingly important global issue. Central Asia is among the regions that are vulnerable to what experts call “high water stress,” but in the face of rising danger, regional authorities seem stuck in mud.

The inability of Central Asian states to cooperate on water-related issues was on display at a June 9-10 international conference in the Tajik capital, Dushanbe. The event, attended by UN Secretary General Ban Ki-moon, was convened to assess the results of the UN’s “Water for Life” plan, a decade-long initiative launched back in 2005. The almost 2,000 participants heard more than 70 reports at the Dushanbe gathering; yet despite numerous statements of concern, the meeting produced no substantive measures.

“I attended several thematic sessions where I heard an endless chain of high-flying phrases – ‘capacity building,’ ‘institutional development,’ ‘participatory approach,’ [and] ’transparency and accountability,’” a Tajik non-governmental organization (NGO) activist told EurasiaNet.org, speaking on condition of anonymity out of concern about potential retribution. “Bureaucrats have invented a language of their own to ensure ‘proper visibility’ … and justify the spending of funds.”

The results of the June conference were consistent with previous meetings. And when it comes to managing Central Asia’s water resources, regional governments cannot seem to agree.

At the last major water conference in Tajikistan, held in 2013, Tajik officials proposed establishing an international water diplomacy center in Dushanbe. The initiative was designed to diminish the risk of water disputes causing a conflict among two or more states. But the idea ended up dying at the drafting stage.

In 2008, Tajik President Imomali Rahmon called for the creation of a regional water and energy consortium, along with an international initiative to develop Lake Sarez, a reservoir created by an earthquake in 1911 that now holds 17 cubic kilometers of pure drinking water. Underlying both ideas was the goal of creating infrastructure to supply up to 40 million people in Central Asia with fresh drinking water. The proposals did not find any support from Tajikistan’s neighbors, and the consortium plan, like the water diplomacy center, met an unceremonious end.

Against this backdrop of years of unimplemented initiatives, the threat posed by dwindling resources and waste continues to grow.

“It is quite obvious that shortage of water and poor resource management [can] trigger conflicts in different regions,” Marcel Vaessen, head of the Caucasus and Central Asia branch of the UN Office for the Coordination of Humanitarian Affairs, told EurasiaNet.org at the conference. During his presentation at the Dushanbe gathering, he asserted that by 2030, 47 percent of the world’s population is projected to be living in areas of “high water stress.”

Tajikistan should not be among the at-risk countries. Yet, despite the fact that the country has abundant water reserves, approximately 40 percent of Tajik citizens are believed to have insufficient access to safe drinking water. On social networks, complaints about lack of access to drinking water are rife among residents of Dushanbe: new construction projects are forcing the capital city’s aging infrastructure past the breaking point.