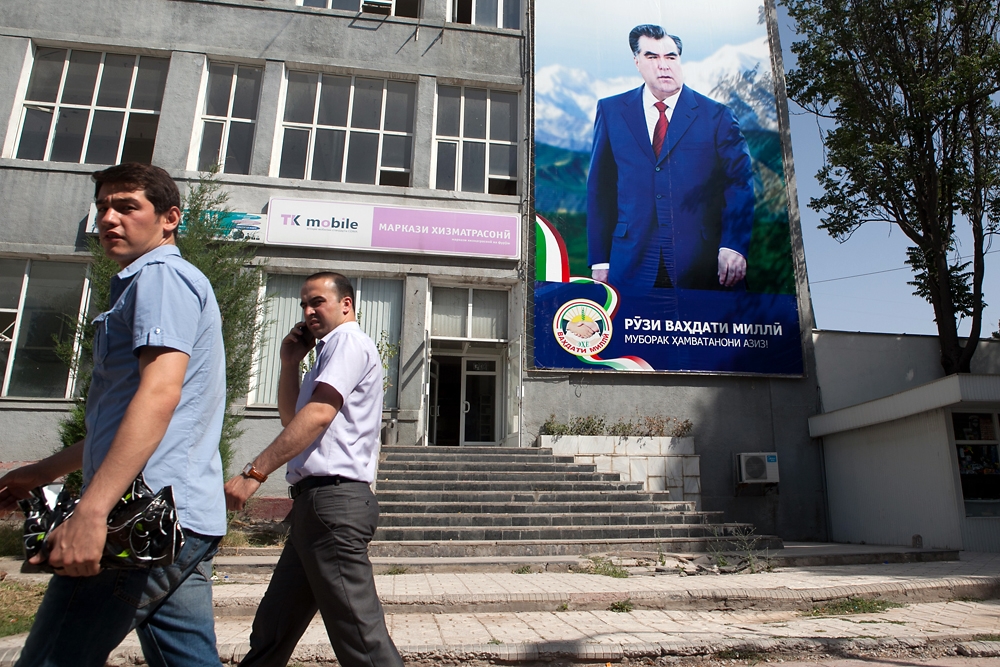 Tajik President Emomali Rahmon, seen here on a billboard in the capital Dushanbe, recently greeted the return of Bozor Sobir, a well-known Tajik poet who has lived in the United States for 19 years. Sobir, who received a free apartment upon his return, is now openly supportive of Rahmon’s administration, drawing fierce criticism from a prominent journalist. The leader of the official Writers’ Union has threatened to sue the journalist, Olga Tutubalina, for libel. (Photo: EurasiaNet)

Official recognition as a member of the intelligentsia in present-day Tajikistan means lots of perks, including apartments and access to state-funded vacation resorts. In exchange, members – described as the “conscience of the nation” – are expected to support incumbent authorities. But one journalist is kicking up a storm by shining light on intellectual corrosion in the existing system.

The official “intelligentsia” in Tajikistan harkens back to Soviet days, when an artist or writer whose work buttressed state policies would gain membership in one of several state-supported “creative unions,” such as the Writers’ Union. It was a quid pro quo in which the artists enjoyed a relatively cushy life, and the state enhanced its legitimacy via arts and culture.

The current controversy in Dushanbe began when Bozor Sobir, a poet who had long lived in the United States, returned to Tajikistan in late May. Sobir established his reputation during the Soviet era, and supported the United Tajik Opposition during the country’s 1992-97 Civil War. The victory of forces loyal to Rahmon in that conflict prompted Sobir to leave the country, and he resided in the United States for 19 years before Tajik authorities coaxed him into returning. Upon landing in Dushanbe on May 27, he dutifully praised Rahmon, who will run for another term this fall. Sobir called on Tajiks to unite around the president, and questioned the need for Tajikistan to have multiple political parties.

Those comments prompted Olga Tutubalina, the editor of the Asia-Plus weekly newspaper, to write a scathing commentary on May 30 that condemned Sobir by name and castigated the cozy relationships that many writers and artists maintain with the state. In asserting that many in Tajikistan’s intellectual class are frauds and sell-outs, she quoted a letter that Bolshevik leader Vladimir Lenin supposedly penned to pro-Soviet poet Maxim Gorky: “In fact, they are not [the nation’s] brains but its [waste].”

“Now, the former democrat and revolutionary [Sobir] has transformed himself into a high priest of authorities’ will,” Tutubalina added, reminding her readers of the poet’s role in the civil war.

Tutubalina’s blast did not go unanswered. A few days later, Writers’ Union Chairman Mekhmon Bakhti reportedly told a meeting of union members that Tutubalina had insulted not only all Tajik intellectuals, but also the whole nation, and that she should be sued. “The journalist misinterpreted Lenin’s words, and it is obvious that she dislikes Tajiks,” he told the Ozodagon news agency on June 17. Tutubalina is an ethnic Russian born and raised in Tajikistan.

“Should anyone say something about the intelligentsia in the same tone in another country – Kyrgyzstan, Turkmenistan or Georgia, for instance – they would skin that person or would drag him like a sacrificial animal in a game of buzkashi,” added Bakhti, referring to a polo-like game played with a decapitated goat.

For her part, Tutubalina told EurasiaNet.org that she did not mean to insult anyone. At the same time, she insists she has nothing to apologize for. “One particular segment of the intelligentsia does not deserve respect. I meant those who speak only when they get permission from above,” she said.

“Maybe they will take this to court. Initially, I thought that idea comes from certain individuals from the creative unions,” Tutubalina continued. “Now, I am almost certain that this is an order from above. Bakhti said I ‘insulted not only the intelligentsia, but the nation,’ and that ‘I dislike Tajiks.’ These accusations are groundless, but someone wants to make this into an ethnic issue. These statements are pressure on me personally, and on the independent media.”

Bakhti’s comments have divided Dushanbe’s educated class, many of whose members are privately critical of the government’s handling of the Tajik economy, specifically widespread corruption and the implementation of extravagant construction projects. Meanwhile, outsiders are critical of official creative unions for being silent about the problems facing Tajikistan.

“This so-called ‘conscience of the nation’ has slept for so long in cahoots with all the nasty things around it,” author Temur Varky told EurasiaNet.org. “Now, they are shouting about their honor and dignity. Their essence – their adaptive behavior, cowardice and uselessness – has not changed.”

Galina Elbaum, a filmmaker and a member of the Cinematographers’ Union, emphasized that Bakhti should not be seen as a spokesman for all in the creative class. “Not all of the creative unions share the opinion of Mekhmon Bakhti. It is unlikely that they would sign a petition against the journalist,” she told EurasiaNet.org. “A professional journalist has the right to argue and reason, and to do this publicly.”

Bakhti maintains that he and at least nine others plan to file a lawsuit. Libel was decriminalized last year, but it remains a civil offense. Press freedom advocates say that Tajik courts have in the past manipulated damage awards so that they, in effect, cause the bankruptcy of media outlets that have fallen out of official favor. So far this year, according to the National Association of Independent Media, six lawsuits have been brought against journalists, mostly by officials.

Abdugani Mamadazimov, head of the National Association of Political Scientists, told EurasiaNet.org that Tajikistan’s few independent media outlets are more active than its opposition parties, which explains why they face more pressure, especially in election years. “Our mass media and independent journalists are the first to fight for democracy and civil society,” he said. Asked why the Writers’ Union chief cares so much about Tutubalina, Mamadazimov pointed at the ceiling and said, “He got a call from the top and was told to do this.”