A state TV program accuses reporters of working in league with would-be extremists. 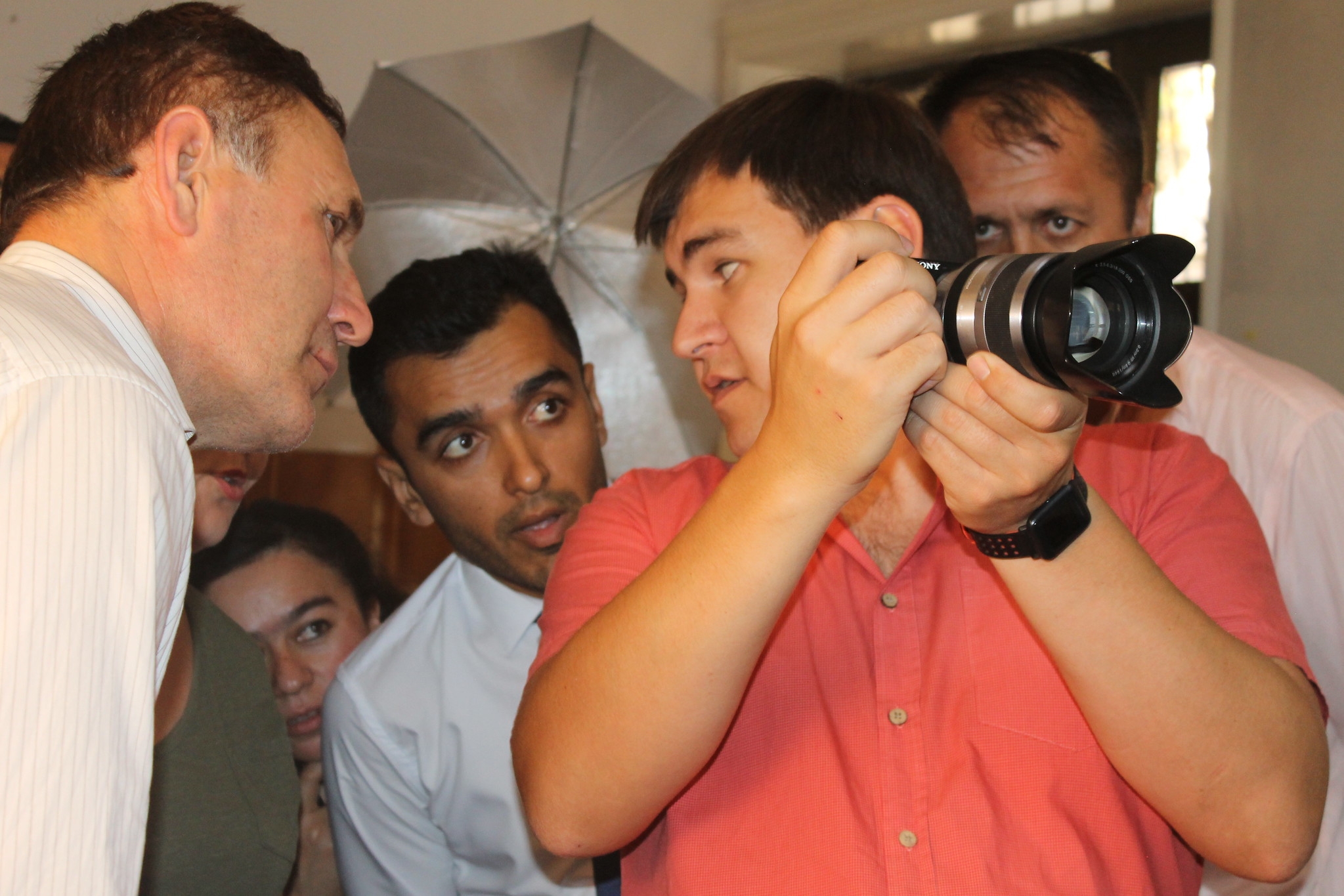 Who's behind you?: A media trainer sharing tricks of the trade at a USAID-funded training seminar in 2019. (Photo: USAID)

Tajikistan’s war on independent journalists is reaching a new pitch, not just growing in intensity, but also taking on new forms.

This week, state television broadcast a three-part series focusing on the regime’s perceived enemies. Two episodes were devoted to government bête noire Muhiddin Kabiri, an exiled opposition politician who leads the banned Islamic Renaissance Party of Tajikistan, or IRPT, and his alleged but undocumented subversive activities.

In the third, one-hour-long episode, attention turned to journalists said to be working for Prague-based outlet Akhbor. The program referred to reporters by name and detailed the amounts of money they are meant to have earned from working for the website.

One correspondent from the town of Penjikent, Khurshed Fozilov, is said to have received $3,910 over three years. Another, Saodat Ismoilova, from the Asht district in northern Sughd region, earned $1,670.

An ominous voiceover then proceeds to allege, without producing evidence, that the editor of the website, Mirzo Salimpur, is working at the behest of Kabiri and a “Muslim country known to everybody.”

That country is never named, although historic state attack propaganda makes it clear this is a reference to Iran. Tajikistan routinely resorts to demonizing the government in Tehran as a would-be sponsor of destabilizing activities, something it does in part by supposedly financing the IRPT. Since the two countries are currently experiencing relatively cordial relations, however, state media has refrained on this occasion from actually naming Iran.

Akhbor’s correspondents are then accused of working without accreditation for a media outlet based outside the country. While doing so, they have avoided paying taxes on their incomes, the program states.

This passage glosses conveniently over the complicated realities of obtaining journalistic accreditation from the Tajik Foreign Ministry. The formal permission to work is granted only selectively and is used to pressure reporters based inside Tajikistan into exercising self-censorship.

RFE/RL’s Tajik service, Radio Ozodi, has been a favored target of this form of bureaucratic pressure. Many of its reporters in Tajikistan are currently without accreditation.

Matters are not much better for foreign reporters visiting for brief, self-initiated assignments, as opposed to junkets. Officials in the Foreign Ministry habitually wear down such correspondents by refusing to respond to requests to process documents and dragging out the procedure for weeks and even months.

The Organization for Security and Cooperation in Europe’s media freedom representative, Harlem Désir, in late May issued a statement to condemn a ruling by Tajikistan’s Supreme Court to block access to the Akhbor website, a decision that was based on the site’s alleged practice of providing a platform to “terrorist and extremist organizations.” This is an allusion to the IRPT, which is not recognized as an extremist group by any government other than Tajikistan’s.

“The ongoing blocking of an online news resource is a severe restriction on the freedom of expression, which goes far beyond the request to take down specific content,” Désir said.

Pressure on reporters has taken on more direct forms in recent weeks. Around a dozen independent journalists have been summoned to the Prosecutor General’s Office and the State Committee for National Security, or GKNB, the successor agency to the KGB, for lengthy interrogations. During those exchanges, reporters have sometimes been directed to write articles at the behest of security bodies.

The GKNB has also initiated tax probes into media outlets receiving foreign grants and demanding more information about the ways in which these funds are being spent.

Lawmakers in the rubber-stamp parliament are doing their bit too. On June 10, deputies in the lower house of parliament voted in favor of making it an administrative offense to spread “inaccurate” and “untruthful” information about the COVID-19 pandemic through media or the internet. Individuals found to be in breach will face fines of up to 580 somoni ($56), while legal entities, ostensibly meaning media outlets, may have to pay 11,600 somoni ($1,130).

In view of the government’s own systematic efforts to cover-up the scale of Tajikistan’s coronavirus outbreak, the judgement of the courts on what constitutes truthful information may be at strong variance with reality. That point was made in a statement by advocacy group Reporters Without Borders, or RSF.

“Under international law, nothing ever justifies giving a public authority the power to decide what is true or false, or – without reference to a judge – to restrict the right of a person or media to freedom of expression on the grounds that what they say might be false or inaccurate,” RSF said in a statement. “We call for the withdrawal of these amendments, which violate freedom of the press and expression.”

In its most recent World Press Freedom Index, RSF ranked Tajikistan 161st out of 180 listed countries and territories.

This year has brought only more woe to media, as authorities show more inclination to use heavy-handed methods to cow reporters into submission.

In April, a court in Dushanbe sentenced independent journalist Daler Sharipov to one year in prison on charges of incitement to religious hatred. Formally, his offense was to write a pamphlet in which he quoted the writings of a banned Islamic group, even though the text itself was actually making the argument that Islam did not justify acts of terrorism.

Sharipov’s more serious and real transgression had been to write extensively about the violations of religious freedoms in Tajikistan.