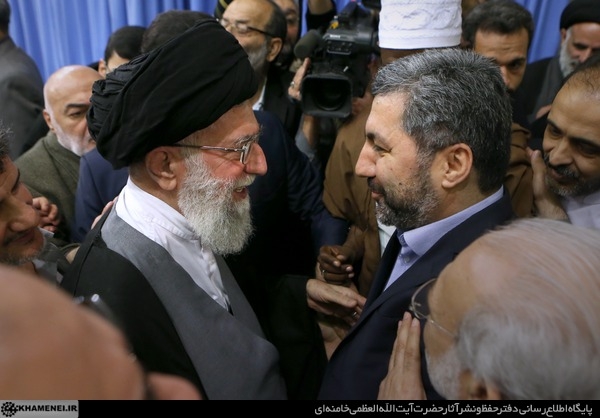 Authorities in Tajikistan are fuming at Iran about the potential negative fallout for relations caused by the latter’s decision to host wanted opposition leader Muhiddin Kabiri.

Kabiri attended a conference in Tehran entitled “Islamic Revival” on December 27-29, and to compound the perceived offense to Dushanbe, he was seated on the same row as the head of Tajikistan’s semi-official Council of Ulema.

On December 29, Kabiri met with Iran’s Supreme Leader Ali Khamenei for talks whose focus has not been disclosed. Sources close to Kabiri have told EurasiaNet.org that Khamenei was specifically interested in hearing about the fate of the now-disbanded Islamic Renaissance Party of Tajikistan (IRPT). Photographic evidence of Khamenei warmly exchanging words with a man that Tajikistan has dubbed a terrorist for his alleged but unproven involvement in a purported coup d’etat in September has stuck unpleasantly in Dushanbe’s craw.

On December 28, the Foreign Ministry of Tajikistan fired off a testy diplomatic note to Iran noting its irritation that the “head of a terrorist party suspected of mounting an attempted overthrow of the government” had been invited to the conference.

Dushanbe claimed in its note that Kabiri is subject to an Interpol wanted notice, although nobody of the IRPT leader’s description is in actual fact listed on the Interpol website. Such flights of fantasy have become routine for officials in Dushanbe.

Tajikistan has warned the episode could “have a negative influence on good relations between Tajikistan and Iran,” marking the first time Dushanbe has ever leveled such ominous diplomatic threats.

“How it is possible for the leader of a party that has repeatedly ordered violent acts and killings to speak about unity and Muslim brotherhood,” Yusupov said. “Iran has always spoken of Tajikistan as a brotherly nation with a shared faith and culture. How it is then possible to welcome a terrorist?”

Kabiri is not on record as ever having exhorted anybody to violence and has disassociated himself entirely with events in Tajikistan in September, when supporters of a former deputy defense minister clashed with government troops. Neither he nor his party have been designated as terrorist organization anywhere outside Tajikistan.

The circumstances that sparked the unrest in September remain unclear as authorities continue to pursue criminal cases in a highly opaque fashion. The United States, which has lavishly supported Tajikistan’s armed forces with equipment, has tentatively pressed Tajikistan for an open investigation, but refrained from forcing the issue.

Delivering his most recent Friday sermon, the head of the Council of Ulema, Saidmukarram Abdulkodirzoda, said Iran’s invitation to Kabiri was an unjustifiable demonstration of Tehran’s open support for the IRPT.

Abdulkodirzoda described Kabiri as a “traitor” and Iran as an “abettor of traitors.”

“Iran openly support the enemies of the Tajik nation,” he said.

Iran’s diplomatic corps have so far kept mum on the whole affair.

The spat has unfolded as Iran is embroiled in a far graver standoff against strategic foe Saudi Arabia, which has severed diplomatic ties with Tehran. Presumably by coincidence, Tajikistan’s President Emomali Rakhmon paid an official visit to Saudi Arabia this week in a bid to drum up some economic support for his own virtually bankrupt government.

Linguistic and business links have long drawn Iran close to Tajikistan, but this latest turn of developments could mark a curious geopolitical turning point.

In a fresh turn of the screw on Kabiri, the IRPT leader’s 95-year old father, Tillo Kabirov, was on January 4 denied permission to board a flight from Dushanbe to Istanbul. On the evening of the same day, Kabirov was sent back to his home village. The family has declined to disclose what he spoke about with the security service operatives that detained him.