Tajikistan: Is an Arbor Boondoggle Growing in Dushanbe? 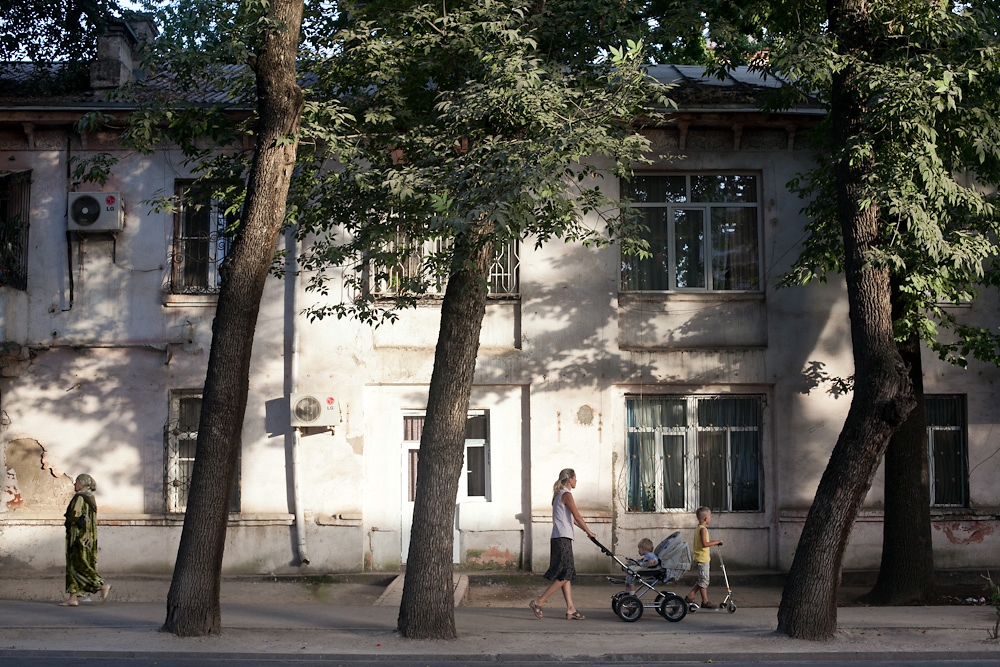 Dushanbe: getting sick of the sycamore? (Photo: David Trilling)

Back when it was called Stalinabad, former Soviet dictator Joseph Stalin reportedly took a personal interest in the greening of his namesake city, now known as Dushanbe. A massive tree-planting initiative accordingly created a green canopy to shade the capital from Tajikistan’s scorching summers. Today, authorities are cutting down those Stalin-era trees and replacing them with over $4.5 million-worth of imports from Belgium.

This isn’t only a story about trees, of course. For many Dushanbe residents, the mass felling of sycamores lining the city’s central boulevards touches a raw nerve, generating anger about not being consulted on the landscaping changes, and heightening concerns about corruption. Many are scratching their heads, asking a couple of basic questions; why the need for imported trees in a country with rampant poverty? And who might be profiting?

Since November, Dushanbe’s mayor’s office has imported 3,000 mature chestnut trees from Belgium at a cost of 22 million somoni, a spokesman for the mayor’s office confirmed to EurasiaNet.org. The Ozodagon news agency, concerned some of the city funds may have been squandered in the process, pointed out on March 3 that each tree is worth the equivalent of monthly pension payments for 37 Tajik retirees.

There’s no data on how many trees have already been cut down along Aini, Bohtar and other thoroughfares, but Abdusattor Kholov, head of the municipal department responsible for planting the trees, contends that the Belgian chestnuts are doing well.

“I planted 115 of the chestnut trees in the Navruzgoh Stadium complex, also I’ve planted trees in front of the Palace of the Nation. Not one of them has turned yellow,” Kholov told EurasiaNet.org. Asked how Dushanbe came to decide on the chestnuts, he explained; “twelve experts went to Belgium to make the decision. Only after that were the trees transported to Dushanbe.”

Seven types of chestnuts and Spanish sycamores, averaging four-meters tall, were transported to Tajikistan by road, which took 10-15 days, Kholov said. When questioned why the trees were so expensive, he said they were 20-years-old and had been regularly transplanted so their root system could be contained for transport. It’s not clear whether Tajikistan will be able to breed the trees or not, because the chestnuts are not producing seeds.

Despite Kholov’s contention about the chestnut trees, some of the imports are having a tough time adapting to their new environment. In perhaps the highest profile example, a 50-year-old Californian redwood that President Imomali Rakhmon planted a year ago as a symbol of Tajikistan’s “eternal independence” has died.

There is little public discussion about what is going on. The office of Mayor Mahmadsaid Ubaidullaev is tight-lipped. When explaining the changes, officials often refer to a Soviet-era “master plan” as justification for the reshaping of whole center-city districts and the forced relocation of many residents to distant suburbs. But the plan’s details are not subject to public inspection.

When asked why sycamores were being cut down, Kholov cited traffic congestion and road-widening projects. “We have very strict standards when it comes to cutting down the trees. Even the head of state [President Rakhmon] pays attention to this,” Kholov said. “The roads were too narrow and there were a lot of traffic jams. Like it or not, there’s a need to widen them and to cut down trees. That’s why we cut them down. After finishing the street, what we should have planted? Some people are allergic to sycamores.”

Residents’ reactions are mixed. Sulton Rahmatov, 26, complains of a spring allergy to the sycamores and he welcomes their replacement. But a popular blogger sees a more sinister explanation. By cutting down the trees, the unnamed blogger wrote in comments distributed by Global Voices, city officials “deprive the city of its soul. They want to change us, turn us into a different kind of people, with a different set of ideas and values. They are molding us, as if we were clay, into a new people of a new Tajikistan.”

Ultimately, many Dushanbe residents believe corruption is a factor in not just the tree swapping project, but in all urban renewal initiatives. For some, the chief symbol excess and inefficiency is the new presidential palace, the centerpiece of a growing government district that radiates out over former parkland in the center of Dushanbe. The Palace of the Nation reportedly cost $300 million to build (or about eight times USAID’s 2014 budget for Tajikistan) and stands largely empty. When it was completed, authorities cleared many of the grand old trees in the city’s central park so passersby on Dushanbe’s main thoroughfare could get a better view of the palace.