Tajikistan: Is rumored amnesty for real or a bluff?

One moment there is talk of opposition figures being released, the next, officials are assaulting activists. 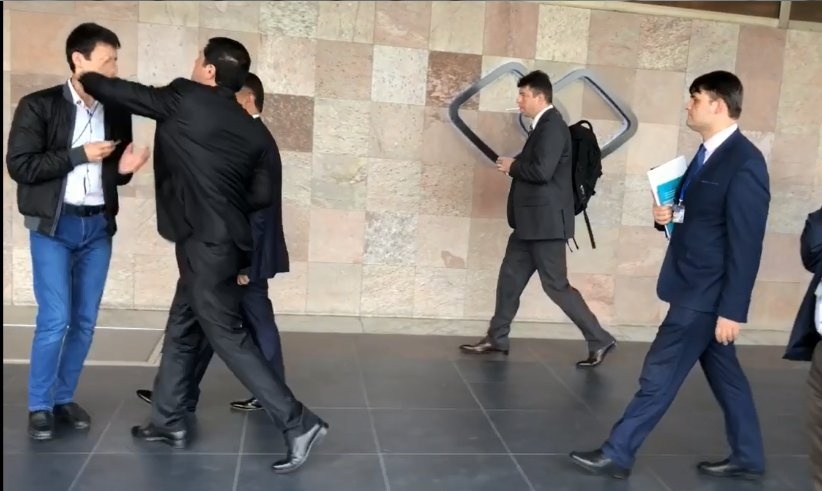 It is a deeply confusing time for anybody trying to understand what Tajikistan’s official line on the opposition is these days. One moment, there is talk of mass amnesties of political prisoners. The next, state officials are assaulting exiled activists in European capitals.

The week had started on a positive note with Muhiddin Kabiri, the Europe-based head of the banned Islamic Renaissance Party of Tajikistan, saying he had received assurances during a chance encounter with Saifullo Safarov, the deputy head of the Strategic Research Center, a think tank affiliated with the Tajik presidential administration, that dozens of political prisoners are set to be released.

“Safarov said that all political prisoners will soon be released. He even offered a number — 183 people, and he named Zaid Saidov, Mahmadali Hayit, and other opposition people, members of my party, activists and my deputies,” Kabiri was quoted as saying by Moscow-based Ferghana news agency.

The exchange is said to have taken place on September 10, on the the sidelines of the Human Dimension Implementation Meeting, an event organized annually in Warsaw by the democracy-promoting wing of the Organization for Security and Cooperation in Europe.

The figures alluded to by Kabiri are high-level opposition figures who have been sentenced to several decades in jail on charges that rights activists have repeatedly stated were trumped-up.

According to sources speaking to Eurasianet on conditions of anonymity, the list of people purportedly set to be amnestied is currently being reviewed by the Justice Ministry and the General Prosecutor’s Office. The list is also said to include the names of Maqsud Ibrohimov, who used to lead a Russia-based opposition movement called Youth for the Revival of Tajikistan, and Abumalik Salomov, a well-known doctor who was member of a Salafi-affiliated group. Another prominent Salafi figure, Muhammadi Rahmatullo, is also possibly set for release.

All this having been said, no official is willing to go on the record to confirm any such plans. Were these intentions to pan out, the question would arise as to what had prompted them. President Emomali Rahmon's regime towers over a teetering economy, but on the political front, it is arguable that he has rarely enjoyed such uncontested power.

The fact remains that even if policy may be evolving, the officials actually charged with presenting Tajikistan’s public face are still committed to a course of thuggish intimidation. Cue a September 11 incident at the Warsaw event in which members of Tajikistan’s government delegation physically attacked activists with the foreign-based opposition. The incident was caught on camera and posted online. The whole episode was slight and lasted but a matter of seconds, and yet it illustrated plainly that peaceful dialogue is still ways away.

In a coda to this unsavory incident, the person responsible for filming the altercation claims that Tajik officials driving away from the Warsaw conference charged him with their vehicle, only narrowly missing him in the process. The activist, Shukhrat Rahmatullo, posted a photo of his scuffed shoe, saying it showed how the car had run over his foot.

And if the talk of clemency being filtered out is a measure to induce opposition activists into desisting from their work, it does not seem to be working. This week, a group of opposition groups, including the IRPT, announced that they are formally creating a united coalition. The other three groups represented in what is dubbing itself the National Alliance of Tajikistan are the Forum for Free-Thinkers of Tajikistan, the Reform and Development Movement and the Central Asian Migrants Movement. The alliance was sealed in a declaration in Warsaw on September 9, which also marked Tajikistan’s Independence Day.