Since unrest in November, the region has been cut off from the internet. Now it appears the far-off central government is setting the stage for a fresh and more brutal crackdown. 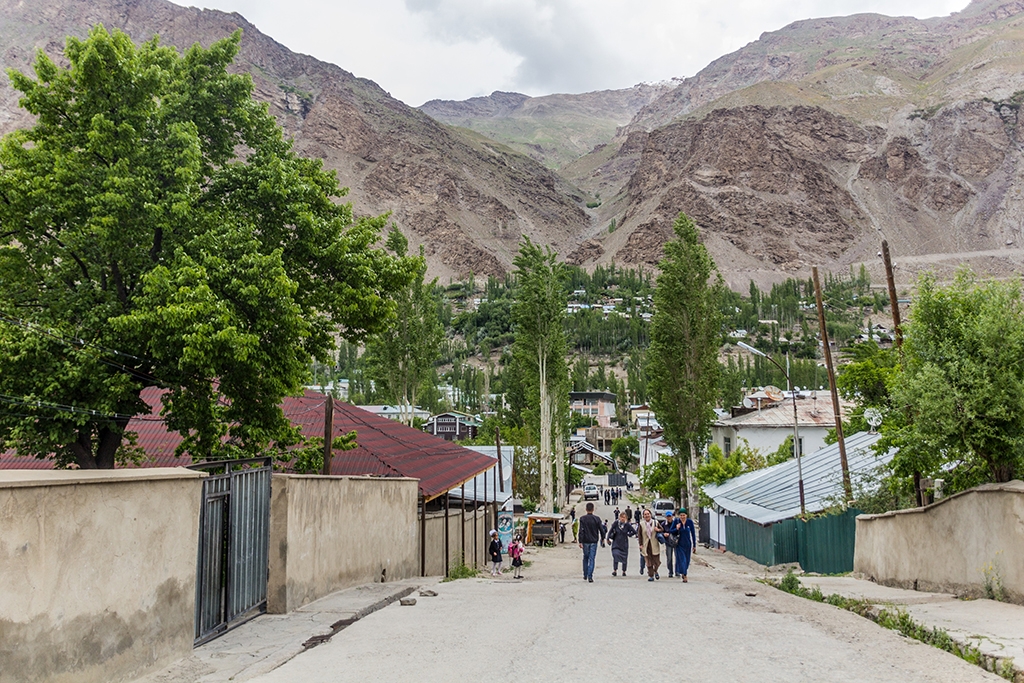 An uneasy air of anticipation has descended over Tajikistan’s Gorno-Badakhshan autonomous region.

The region, known commonly by its Russian-language acronym GBAO, was the scene of massive protests in November as people came out to show their anger over the killing of a local resident at the hands of the police.

Days of violent standoffs were brought to an uneasy close with unusually conciliatory pledges from the government to the Pamiris, who are ethnically and religiously distinct from the majority Tajik population.

Now, many worry that the authorities are intentionally going back on their word to set the ground for a fresh and more brutal crackdown.

Advocates for autonomy are being targeted for arrest. Promises to deescalate the security presence in the region have pointedly been broken.

Over the past week, the state-run broadcaster in the GBAO, a region of around 200,000 people with a long and porous border with Afghanistan, has been running reports about what it describes as the region’s criminal gangs. And the local community, the reports add ominously, have been lending these gangs cover.

Sadri, a resident of the GBAO’s capital, Khorog, told Eurasianet on condition of anonymity that many in the city are alarmed that officials are purposely seeking to spark a confrontation.

“On January 10, [regional officials] had their annual reporting meeting.” Sadri said. “This is usually a time for talking about successes and failures. On this occasion, they handed out leaflets to people in the audience. The head of the region and the mayor talked about criminal activity and blamed regular people for failing to expose it.”

In one speech available online, Khorog mayor Rizo Nazarzoda talked about the impunity of organized crime groups, which he said had adopted a position toward the authorities of “don’t touch me, and I won’t touch you.”

“The regional capital cannot develop as a center of industry and culture because of these organized crime groups,” Nazarzoda said. “Because of the current situation, highly qualified personnel are leaving the region along with their families. These is a serious loss for us, and for the development of the city of Khorog.”

The complaints of officials about gangs in the GBAO engaged in smuggling and racketeering have more than a grain of truth in them. Few locals would deny that. But the story is more complicated than that.

Robust formal opposition to the regime is wholly impossible under the deeply authoritarian system constructed by President Emomali Rahmon. In this vacuum of legitimate politics, criminal groups have in effect assumed the role of “informal leaders,” as they are often called, for many Pamiris thirsting for greater autonomy from the capital, Dushanbe.

The government has named figures like Mamadbokir Mamadbokirov and Tolib Ayombekov as leading representatives of those groups.

Tensions between Dushanbe and the GBAO have been bubbling away for decades and occasionally spill over into major unrest. Serious clashes occurred in 2012, 2014, 2018 and, most recently, in November.

That latest flareup was triggered by the killing of a local resident by law enforcement officers.

Back in February 2020, a group of people from GBAO’s Roshtkala district, including a young man called Gulbiddin Ziyobekov, confronted and allegedly assaulted a deputy prosecutor they said had harassed a young woman. Ziyobekov was subsequently named as the object of a criminal investigation, but his arrest was prevented following the intervention of then-GBAO governor Yodgor Faizov, who was removed from his post in early November.

With Faizov, a figure generally respected by his fellow Pamiris, out of the way, police resumed their hunt for Ziyobekov. Their attempt to arrest the 29-year-old ended violently and with his fatal shooting by the police.

Khorog reacted with fury. Thousands came onto the city’s main square.  At least two people were killed after an initial attempt by government forces to suppress the demonstration.

The crowds only dispersed after the government agreed to the creation of an independent 44-person investigative commission into Ziyobekov’s death. There were also promises that participants in the rallies would not be prosecuted. Finally, officials pledged to restore internet connections.

The historic demands of Pamiris go far deeper than that, however. The GBAO’s autonomy exists mostly on paper. All the region’s top officials are appointed by the center and answer only to Rahmon. Instruction in schools is only in Tajik, not the Shughni language or other Pamiri tongues spoken in most households. Radio and television, all controlled by the state, broadcast exclusively in Tajik. A privately owned radio station that began broadcasting some select Shughni programs in 2014 ceased doing so just weeks later. Pamiris say it was stopped under pressure from the authorities.

The roads to the distant highlands of the Pamirs have been allowed to crumble, rendering the 600-kilometer drive from Dushanbe to Khorog a full day of spine-jangling misery. And yet, the center paradoxically keeps the GBAO on a short leash. The presence of government troops has been incrementally bolstered over the years as Rahmon’s regime seeks to rein in the wayward region.

Rahmon has for months omitted to refer to the Pamirs, but law enforcement sources routinely brief on their stated battle against local crime groups there. They have been given free rein to use all methods necessary. Explicit approval for a militarized approach was granted by Rahmon in 2018, when he said that only the armed forces were able to tackle the problem of what he termed a wave of criminal activity, since police were not up to the job.

That characterization of the GBAO as a pit of lawlessness is entirely at odds with the impression of foreign visitors to the area. Intrepid travelers habitually speak in glowing terms of the almost-aggressive hospitality of Pamiris and petty crime against outsiders is almost unheard of.

Faromuz Irgashev, one of the people on the 44-person commission, told Eurasianet that law enforcement agencies – specifically, the General Prosecutor’s Office, the police and the State Committee for National Security, or GKNB – routinely summon ordinary people for questioning and thereby pile pressure on them.

“They don’t treat us like human beings, they threaten us,” Irgashev said. “In my case, for example, they say to me: ‘You’re a nobody’,” they say we are breaking the law with our rallies, they say we will be prosecuted.”

Irgashev said that contrary to promises made after the November demonstrations, residents who chopped down trees to block roads and who clashed with police are being investigated. Fully 66 people have had travel bans imposed on them over suspected involvement in the unauthorized rallies. The death of Ziyobekov, meanwhile, is being forgotten about, he said.

That is not where the intransigence ends.

When demonstrations broke out in Khorog, the authorities quickly pulled the plug on the internet to make sure images of the events did not reach the outside world. To this day, those connections lay dormant for everybody expect government offices and banks.

Irgashev said that the independent commission on which he sits gets videos messages out by saving them on a flash drive and physically dispatching them to Dushanbe. Under the conditions of this information blockade, darks rumors are spreading among the local population. Talk often turns to predictions of an imminent security operation.

Armed checkpoints have stood at the entrance to Khorog since 2018. Officials promised they would be removed. That too was a lie.

In Russia, whose government happily collaborates with Tajikistan on repressive measures, pro-Pamiri autonomy figures have been singled out for arrest and deportation back to their home country.

Chorshanbe Chorshanbiyev, a popular 26-year-old mixed martial arts fighter with roots in the Pamirs, was forcibly removed from Russia to Tajikistan late last year. He now faces charges of inciting ethnic hatred and insurrection over remarks made in a video message expressing solidarity with the Khorog demonstrators.

The fate of another Pamiri, Amriddin Alovatshoyev, remained unknown as this article went to press. The Russia-based Tajik national, whom Dushanbe authorities have described as a member of an organized crime group, helped organize a picket outside the Tajik Embassy in Moscow in late November. Last week, Alovatshoyev disappeared. Russian police have issued no public statement on whether Alovatshoyev has been arrested and there are strong suspicions he was spirited out of the country without consideration for basic legal procedures. That is standard protocol in Tajikistan’s dealings with regime opponents.

Some analysts believe this month’s unrest in Kazakhstan may provide Rahmon with further cover for a security sweep in the GBAO. He and fellow members of a post-Soviet military alliance, the Collective Security Treaty Organization, readily went along with the official Kazakh narrative about those disturbances being the work of mysterious terrorist forces. Similar-sounding rhetoric is routinely used by the Tajik government to smear, discredit and finally imprison opponents.

“It seems [Rahmon’s] special services will try to present the situation in GBAO as being analogous to the Kazakh protests. By coupling that with some kind of ‘Afghan link’,” he will get the consent of Russia to destroy his opposition in Khorog,” Andrei Serenko, an expert on Central Asian security affairs at Moscow’s Center for the Study of Contemporary Afghanistan, wrote on his Telegram account.

Alim Sherzamonov, an opposition activist from Khorog now based in Prague, forecast in a January 15 Facebook post that the Tajik authorities were likely bracing for a public uprising in the GBAO. He suggested that Mamadbokirov, one of the Pamiri informal leaders who have long been in Dushanbe’s crosshairs, might be used as the ostensible target for a wide-ranging sweep.

“In any event, my dear countrymen, we must be ready for anything to happen, day or night,” he wrote.