Tajikistan: Just How Much Energy Does Dushanbe Have? 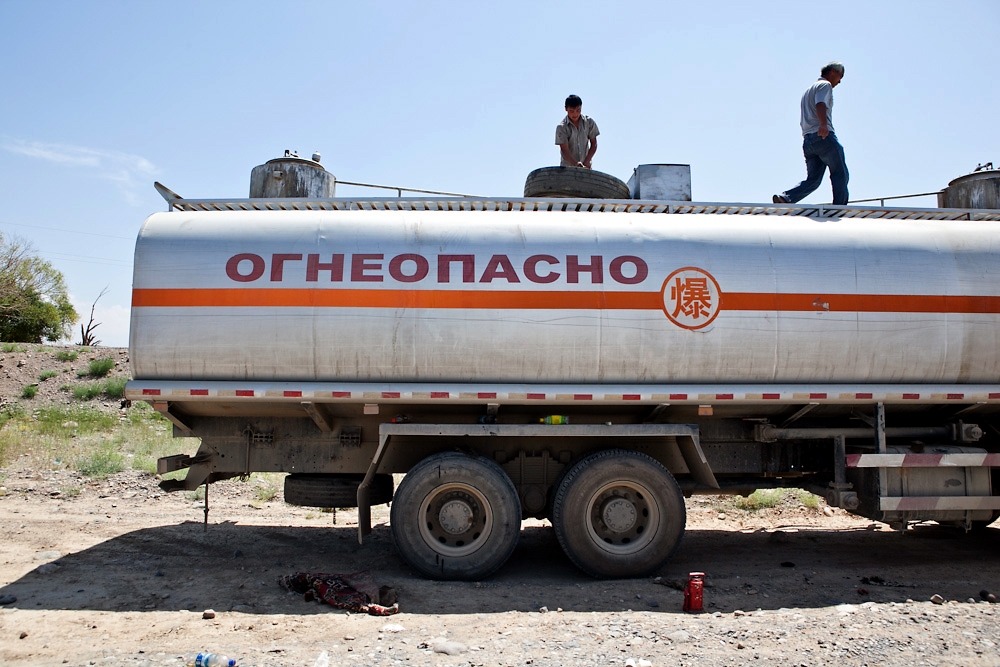 Drivers delivering Russian and Kazakh oil bound for Tajikistan take a break in July 2012 in Kyrgyzstan's Batken Province near the border. Because Tajikistan produces only about 2 percent of its oil and gas needs, mostly from aging Soviet-era wells, the rest must be imported, often by truck. (Photo: David Trilling)

Last summer, a small international prospector operating in the poorest of former Soviet republics released some sensational news: Tajikistan, it announced, is sitting on enough oil and gas to make everyone rich.

Though the evidence is scant and the company, Cayman Islands-registered Tethys Petroleum, remains tight-lipped, the buzz has not subsided. Yet some observers are beginning to question the hype from Tethys, as well as other companies. “All this speculation about Tajikistan magically turning into the next Kuwait overnight is nothing but fairytales,” says Tajik geologist Georgiy Koshlakov, a member of the Moscow-based International Engineering Academy and a former vice premier of the Tajik Soviet Socialist Republic.

Georgiy Sergeev, a former advisor at the State Geological Agency who retired recently, is another skeptic. “Tajik and foreign media replicate illiterate allegations and statements rich in mistakes and absurd figures,” he says.

The excitement took off with Tethys’ July 2012 revelation that it believed Tajikistan was sitting on more than 27 billion barrels of recoverable oil equivalent. In a press release, Tethy’s boss David Robson asserted the find had “super-giant potential.”

Since then, Tajikistan has attracted attention from other major players. Last month, Bloomberg reported that France’s Total hopes to start extracting Tajik natural gas for export to China in a venture with Tethys and China National Petroleum Corporation. Bloomberg, citing Tethys, reported the project targets 3.2 trillion cubic meters (tcm) of gas, “twice Norway’s proven reserves,” in the Bokhtar Deposit that Tethys has been exploring.

Since the Bloomberg report, which also generated waves in the Tajik media, the value of Tethys stock on the London Exchange has increased approximately 23 percent.

Though Tethys representatives declined to speak with EurasiaNet.org, at a panel hosted by the Turkic-American Convention in Washington on March 13, Franklin Huddle, a former American ambassador to Tajikistan, said: "Tethys is on to something, perhaps, and it may be that that will be a significant find that is worth about a trillion dollars over time."

Gazprom has been drilling for years in Tajikistan, too. On March 2, Tajikistan’s small Ozodagon news agency reported that the Russian giant had found 11 tcm of gas, reserves far larger than in neighboring Uzbekistan. But Gazprom has overstated finds before. In late 2010, Gazprom began drilling in the Sarikamysh gas field, which it said held 60 billion cubic meters of gas (bcm), enough to supply Tajikistan for 50 years. It has since said the field holds only 18 bcm. And after two years of drilling six kilometers into the earth, none of it has yet come out of the ground.

Some fear Gazprom may not be trying very hard. Russia’s gas-export monopoly has its own ample Russian supplies it wishes to sell to fast-growing China. The Total-Chinese deal, Bloomberg suggested, “would further hamper Russia’s ambitions to supply China.”

A source in the Russian State Duma’s think-tank told EurasiaNet.org: “Gazprom works in Tajikistan for the sake of Russia’s geopolitical presence rather than for economic benefits.”

Energy security is a priority for Tajikistan’s leaders. The country faces constant shortfalls. It is already home to the tallest dam in the world, the 305-meter, Soviet-built Nurek hydropower plant, which produces about 75 percent of Tajikistan’s electricity. Dushanbe wishes to build an even taller dam, Rogun, but faces stiff opposition from downstream Uzbekistan. Last April, in a move widely seen as designed to scuttle Tajikistan’s plans, Tashkent stopped deliveries of natural gas. Currently, petroleum and gas are delivered by truck to Tajikistan from Russia and Kazakhstan through Kyrgyzstan.

The Tajik Energy Ministry has pledged that the country’s first oil refinery – with an annual capacity of 100,000 tons – will open this week in the Shahrinav District, some 25 kilometers west of the capital. What the refinery will refine remains a mystery, however. An official from the Ministry of Energy and Industry told EurasiaNet.org on condition of anonymity that the oil refinery – and its stated industrial capacity – might be another “fiction.”

“Just like the construction of hundreds of small hydropower plants, which local administrations are so proud of – in reality, shortly after the launching, they stop functioning and the parts get stolen,” the official said.

Some analysts believe much of the recent oil and gas hype is political, designed to boost support for President Imomali Rahmon in an election year. Rahmon is expected to seek another seven-year term as president this autumn. “The quality and the content of publications about Tajikistan’s mythical hydrocarbon wealth leave much to be desired,” said Parvina Khamidova, a former Associated Press correspondent who has immigrated to the United States.

Khamidova went on to say that the reports aimed “to appease the public and give them hope for a bright future.”

Konstantin Parshin is a freelance writer based in Tajikistan. Joshua Kucera contributed reporting from Washington, D.C.