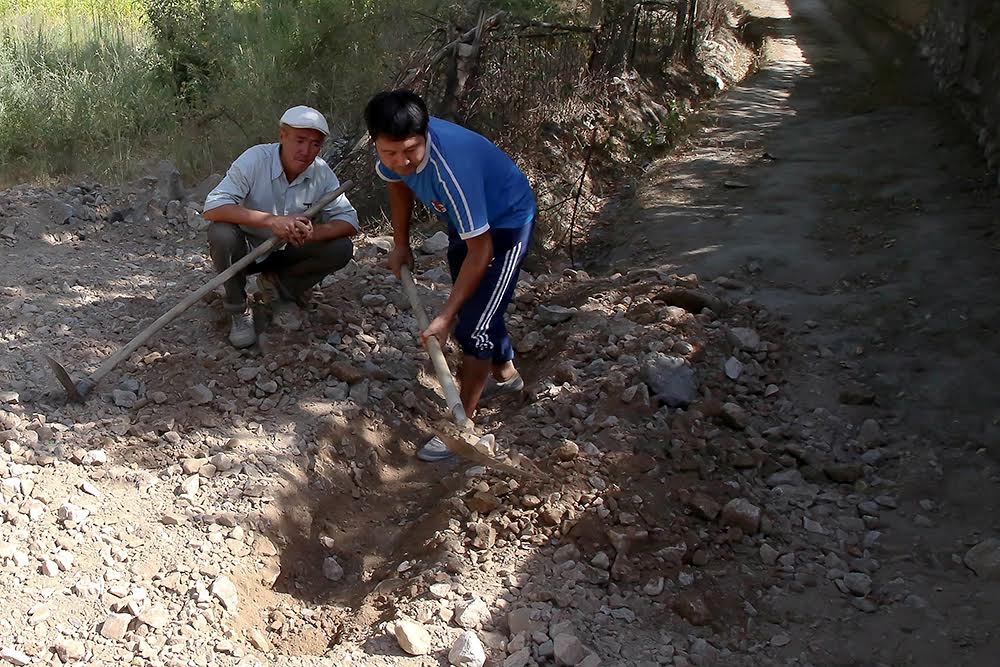 Villagers in Kok-Tash dig a canal on August 9 along the lane over which they clashed with the neighboring Tajik community. Cross-border arguments over small-town problems between Kyrgyz and Tajik villagers are not uncommon: Kyrgyz authorities say they registered 30 cross-border clashes in 2014 alone. (Photo: Peter Leonard)

Interethnic rioting in early August along the border of Kyrgyzstan and Tajikistan started over a narrow, uneven lane about a couple hundred feet long.

At one end of the path is a handful of poorly tended burial mounds — a cemetery used by Kyrgyz in the surrounding village of Kok-Tash, which is also home to many Tajiks. An older burial ground, now overgrown with waist-high weeds, stands at the other end of the lane.

Not too long ago, a Tajik built a small, tree-lined compound, the mud brick walls of which blocked access between the two spots. That caused hard feelings among Kyrgyz. Village elders tried unsuccessfully to resolve the ensuing impasse. Ultimately, words gave way to brickbats, with Kyrgyz and Tajiks engaging in two days of clashes.

“There used to be a way to the cemetery,” local Kyrgyz leader Raziya Osorova told EurasiaNet.org, offering an account on how the rioting erupted on August 3. “We asked to be given a two-meter-wide passage, but they wouldn’t give it to us. They built a wall blocking the way.”

Tajik villagers scoffed at the notion that the old cemetery was ever owned by the Kyrgyz and insisted their own dead were interred there.

Each side blames the other for initiating the trouble. According to wildly varying estimates from officials, locals and media outlets, anything from a few dozen to many hundreds were embroiled in the fighting, which left several people injured and caused damage to homes and a car.

Stones used by villagers to hurl at each other still lay in neat piles along the road in the days after the clashes subsided when a EurasiaNet.org correspondent visited the scene of the unrest.

The disputes that periodically visit these poorly delimited areas are typically cast as unfortunate legacies of haphazard Soviet border engineering. Kyrgyzstan and Tajikistan have been unable to agree on the location of the entire border they inherited when the Soviet Union collapsed in 1991. To date, only about half of the 971-kilometer-long border has been delimited. Kyrgyz authorities say they registered 30 cross-border clashes in 2014 alone.

Practical matters about access to water and useful arable land can easily trump abstract arguments over national boundaries that are, as yet, mostly notional.

In the swirl of territories, it is not always obvious or especially important, even to locals, which country is which.

The winding, westward drive to Kok-Tash from the provincial capital, Batken, passes at least once through a brief stretch of Tajikistan. The road, which is being refurbished with Chinese funds and labor, is ostensibly all under Kyrgyz control. Two unmarked green Kyrgyz border service watchtowers perched on top of blanched, sandy brown hills overlook the section.

Matters in cross-border areas become more complicated in densely inhabited patches where there is fertile soil. In Kok-Tash, known to its Tajik residents as Somonien, the two communities are typically separated by street. Yet in many cases Kyrgyz and Tajik families are living side-by-side. Children go to separate schools in the village, however.

Small violations of unwritten rules are enough to spark nasty conflicts, as evidenced by the cemetery road episode.

As far as the August 3-4 rioting goes, Tajikistan’s security services have pinned the blame on Osorova. “With the intention of absorbing the Mazor territory, which is the joint cemetery with the residents of Somonien, into Kyrgyzstan, Osorova incited the population to unrest,” the security services said in a statement.

Osorova inspires admiration among local Kyrgyz, who hail her robust efforts to resist what they see as Tajik attempts to squeeze Kyrgyz out of the area. “She’s our Kurmanjan-Datka,” said Kok-Tash resident Sultan Abdullaev, referring to a celebrated Kyrgyz tribal leader who emerged as a symbol of resistance to the Russian Empire’s conquest of Central Asia in the 19th century.

Tajiks cast Osorova in a far less benevolent light and say she has long been scheming to expand Kyrgyz holdings, using underhanded means to do so.

Compounding the relatively trifling issue of the cemetery road was the alleged Kyrgyz tactic of stemming a water canal that flowed down to the neighboring village of Chorku, which is inside Tajikistan. Tajiks say they bore the cutoff patiently for five months before the situation came to a head. Kyrgyz villagers deny this, saying they only interrupted the water supply a few weeks before fighting broke out as a last measure to resolve the cemetery lane impasse.

Osorova rejected the suggestion that the Kyrgyz were behind the blocking of the canal at all. “The canal got stuffed with trash and debris. It got blocked on its own,” she said.

In the aftermath of the rioting, the two sides reached a compromise: the wall blocking the lane between cemeteries was torn down and the water canal was unblocked. On a governmental level, officials from both countries agreed to prosecute those determined to be instigators of the unrest.

Kyrgyz villagers in Kok-Tash are now busy digging out a clear path between the two cemetery grounds and rebuilding a little canal along the verge. As they worked on August 9, Osorova came to inspect operations together with the police chief of Chorku, and the two engaged in cordial conversation.

The social fabric that frayed in Kok-Tash in early August has been repaired – for now. But some locals wonder how long the two communities will remain mostly amicable toward each other.

“Before, we even used to go to one another’s weddings,” said Zohid Safarov, a vegetable seller sitting at a crossroads outside Kok-Tash. “Now, we only go to each other’s funerals. We still do that.”

“Bit by bit, things are getting worse,” he said.