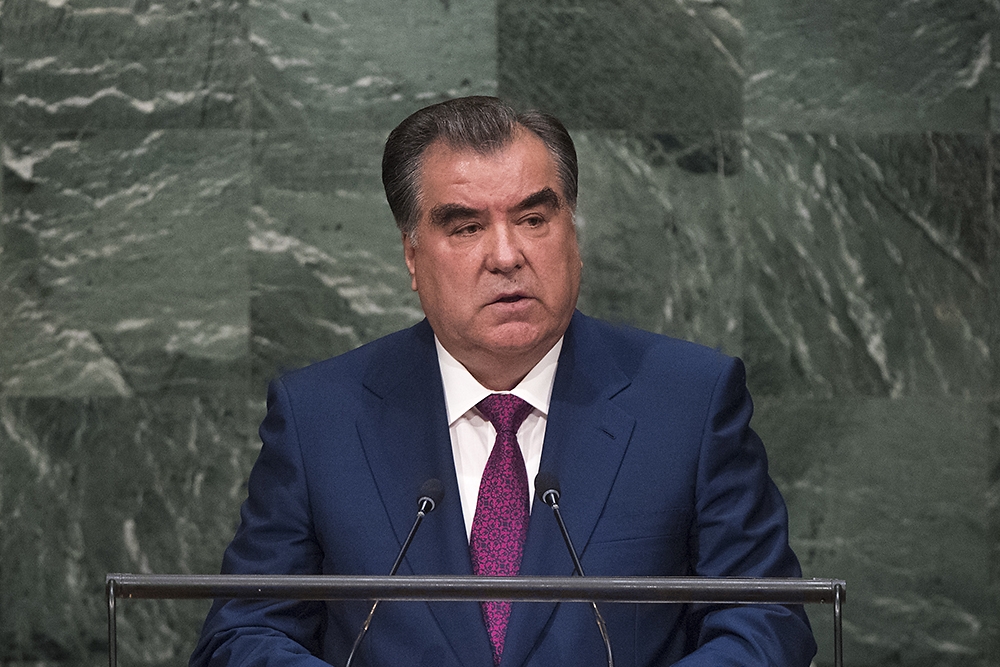 Tajikistan President Emomali Rahmon, seen here delivering a speech at the United Nations on Sept. 29, may soon become the Central Asian country’s “Leader of the Nation.” If approved by parliament, the duties and rights accorded to the “Leader of the Nation” will in essence permit Rahmon to serve as a president for life. The title will also give him perpetual immunity from prosecution. (Photo: UN)

Taking a major stride down an authoritarian path, Tajikistan is set to grant President Emomali Rahmon a title that will elevate him to a leader for life.

The lower house of parliament, a body dominated by the ruling People’s Democratic Party of Tajikistan, voted December 9 to establish Rahmon as “Leader of the Nation.” Such status would grant Rahmon perpetual immunity from prosecution.

Supporters of the move have described the title as a fitting tribute to the man they say led Tajikistan out of its crippling civil war in the 1990s. “History shows that the names of some nations have been forgotten and erased from world maps because they did not have a leader of the nation,” People’s Democratic Party lawmaker Saidjafar Isomonov said. “All great world powers acknowledge that Tajikistan only survived as a state thanks to Rahmon.”

The legislation explicitly states that the honorific can only be applied to Rahmon, who is identified as the “person nominated [to lead the country] during the 16th session of the Supreme Council in Khujand and was then elected president in 1994.”

In assuming the title, Rahmon appears only to be following in the footsteps of fellow Central Asian leaders.

The parliament of Turkmenistan voted in 1999 to declare then-ruler Saparmurat Niyazov president for life. Niyazov, who assumed the title Turkmenbashi, or Father of Turkmen, died suddenly under unclear circumstances in late 2006.

The Tajik move most closely emulates Kazakhstan, which in 2011 granted its president, Nursultan Nazarbayev, the title the “Leader of the Nation.” The relevant Kazakhstani legislation bears numerous similarities to that which has been approved in Tajikistan. Kazakhstani lawmakers gave Nazarbayev a say in policy-making after his eventual retirement and granted him the right to influence domestic, foreign and security policy, and to sit on bodies such as the Constitutional Council and Security Council after leaving executive office. Nazarbayev too is immune from prosecution, albeit only for actions carried out while in office.

The duties and rights accorded to the “Leader of the Nation” in Tajikistan will, in essence, permit Rahmon to serve as a president for life.

Even after he leaves office, Rahmon will be entitled to address the nation and state officials on matters of security, as well as domestic and foreign policy. He can also attend government meetings, National Security Council gatherings and parliament sessions. Most importantly, Rahmon will enjoy veto authority over all important state decisions.

A state guard will be provided to the president and his family for the rest of his life, while he will maintain offices — which will have to be built — in the center of the capital, Dushanbe, and in the town of his birth, Dangara.

There are also material perks attached to the title. A state-owned summer dacha, which is located along the Varzob River north of Dushanbe, will be transferred to Rahmon as his personal property after he ceases to be president. Financing for a library, museum, state medals and buildings in his honor will all be drawn from state coffers. And violating the law on the “Leader of the Nation” will become a criminal offense.

State media has sought to cast the creation of the title — the full name of which is “Founder of Peace and Harmony: Leader of the Nation” — as the product of public demand. An article distributed by the Khovar state news agency on December 11 conveys a cross-section of views, from a pensioner and a teacher to a public activist and a representative of the ethnic Russian community.

“As a person with life experience and more than 55 years of labor under my belt, I not only believe but am certain that Emomali Rahmon is a leader that cares for his people, knows how to support the people, and does everything possible to ensure that they can live in comfort and be free from poverty,” Muhtorjon Ismoilov, an 83-year old pensioner, was quoted as saying by Khovar.

The law may help the president address a political dilemma. Rahmon is on paper not legally permitted to run again once his current seven-year term expires in 2020.

Shokirjon Hakimov, deputy chairman of the Social Democratic Party, a marginal opposition force long shut out of parliament, said the legislation was clearly drawn up with the president’s blessing. “If Rahmon is being called leader of the nation, it means that it is pleasing to the head of state and has been agreed upon in advance,” Hakimov said.

Rahmon will himself have to sign off on the law before it can come into force, but it is not expected that he will demur.

Critics of the title have described it as a travesty of democratic values. “This goes against not just the Tajik constitution, but international norms,” said prominent human rights advocate Oynihol Bobonazarova. “Only totalitarian regimes could allow themselves such a thing.”

Bobonazarova, who was a candidate in the 2013 presidential election before dropping out in the face of government pressure, said the provisions for immunity undermined the proposition that all are equal before the law.

“If somebody breaks law, they should be held responsible. In France, there have been cases of [former] presidents facing criminal charges,” she said. “That is a normal process in a democratic state. The higher your position, the more you should be held to account before the people.”