Development of the telecommunications sector has been hindered by chronic meddling and over-regulation. 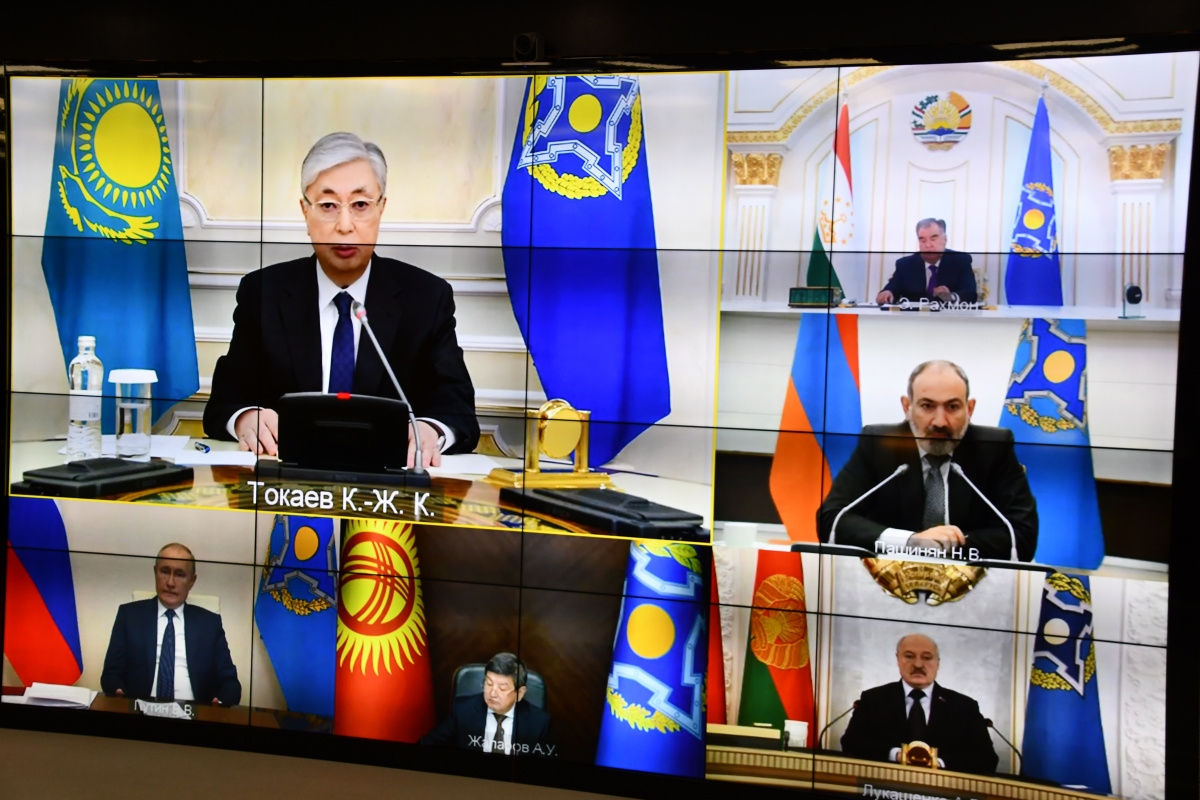 Hello, can you hear me? Is this working? President Rahmon allegedly had trouble getting videoconference software to work at last month's CSTO summit. (Photo: CSTO)

There may be a promising development in the offing for Tajikistan’s long-beleaguered internet users. And the rumor is that all it took for it to happen was the president experiencing embarrassing connection trouble on a recent conference call.

Since February 1, mobile internet service providers have been sending SMSs to their clients to inform them that connection speeds are poised to increase dramatically. What is more, the improvement in service will come at no additional cost, they say.

This will be music to the ears of Tajikistan’s internet users, who currently experience some of the slowest and most expensive connections in the world.

One company, Babilon-Mobile, has said that customers paying for a contract providing them with speeds of 512 kilobits per second, for example, will soon be upgraded to 1 megabit per second. In fact, the company claims the upgrade has already happened, although customers report not yet feeling the difference.

Another company, Tcell, is slashing the prices for its internet packages. Where a 1-gigabyte data package used to cost the equivalent of around $3, the rate will now be closer to $1.70. A 20-gigabyte package will set customers back by around $11.50.

Megafon Tajikistan’s offer of 20 gigabytes for just under $9 looks even more tempting.

It is significant that it is mobile internet providers taking the lead. According to official figures, only around 1 million people in Tajikistan have broadband connections, and most of those live in larger cities, like Dushanbe and Khujand. Meanwhile, around 3.3 million people in the nation of almost 10 million rely on mobile internet connections.

There are varying accounts for why this is happening.

One explanation is that the president’s son and presumed successor-in-waiting, Rustam Emomali, recently complained about the quality of service provided by mobile companies. Emomali was especially exercised by what he said was the discrepancy between the quality of service advertised and what was actually provided.

There is a more intriguing potential explanation for why internet providers have become so solicitous, however.

A source at one mobile telecommunications company told Eurasianet on condition of anonymity that they and industry peers got the word to act after President Emomali Rahmon experienced trouble staying online during last month’s Collective Security Treaty Organization virtual summit. Other participants in that online video call included Russian President Vladimir Putin and Kazakhstan’s President Kassym-Jomart Tokayev. Rahmon seized on the opportunity of the call to warn of the dangers posed to Tajikistan by instability in neighboring Afghanistan.

“During the meeting, his connection dropped out about seven to 10 times. The president was angered by the quality of the internet and reprimanded the head of the communications service,” the source told Eurasianet.

That official, Beg Sabur, who is related to President Rahmon by marriage, has long been the bane of Tajik internet users and telecommunications companies.

A World Bank report published in August 2019 found that the overbearing regulation overseen by Sabur had led to deep stagnation in Tajikistan’s once-promising telecoms sector.

“Despite modest improvements to international bandwidth (to about 6-8 Gbps), Tajikistan’s data transmission speeds remain the slowest among regional peers and other small, landlocked countries,” the World Bank report stated at the time. “Such slow international bandwidth speeds cannot support significant increases in trade in services, the development of a knowledge economy, or reposition Tajikistan as a regional hub.”

Little has changed since then.

A large part of the problem lies in how internet provision is structured. Sabur’s agency does not just regulate the industry – it also owns the national telephone services operator and has a monopoly over the provision of internet data. Smaller ISPs essentially rely on the national internet provider for the traffic that they sell on to their clients.

The government’s desire to maintain a tight control over the flow of information may be another contributing factor to the problem.

In 2016, the government devised a data spigot called the Unified Electronic Communications Switching Center, or EKTs in its commonly deployed Russian-language acronym. This arrangement requires all data entering and leaving the Tajik sphere of the internet to pass through government servers. All domain and service providers, even those ostensibly operating in the private sector, are as a result liable to intense interference from the state.

Many websites are banned in Tajikistan, forcing users to fall back on censorship-dodging VPN software. The speed of the internet is often so poor, however, that the VPNs fail to function properly.