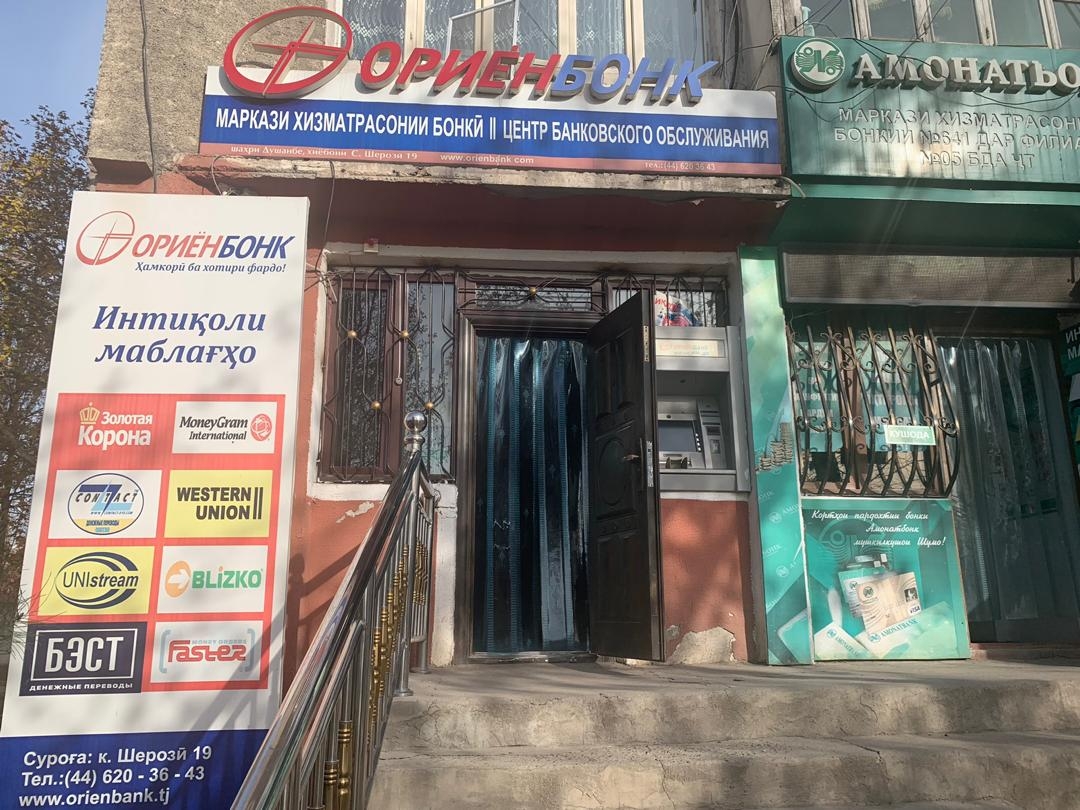 Like a bird on a wire: A bank in Dushanbe that was until last week offering cash transfer services. (Photo: Eurasianet)

Money wiring services ceased being available to customers in Tajikistan on December 3 following government measures to impose greater controls over the business.

The halt of payments through cash transfer companies followed unsuccessful 11th-hour negotiations in Moscow late last month between the National Bank of Tajikistan, or NBT, and representatives from the likes of MoneyGram, Contact, Western Union and Golden Crown. The bulk of the money sent to Tajikistan through those companies is from labor migrants working in Russia.

The NBT announced in a statement on October 3 that it was set to create its own transfer processing center to insure against wiring companies being unable to repay money to the banks inside Tajikistan that hand out the hard cash to recipients. The arrangement was to require all money transfer companies to hold funds in bank accounts in the Tajik financial regulator. This way, local banks would never be caught short if the money transfer company went bust while holding outstanding debts.

Jamoliddin Nuraliyev, the deputy head of the NBT, had insisted the arrangement would not incur any additional costs for customers, although this claim has generated skepticism among those convinced the government is just seeking to create another stream of revenue.

There were ominous signs on December 1, when Tajik banks circulated a collective statement to say that only transfers made through Unistream, a company based in Russia, would now be possible.

But a Eurasianet correspondent who visited more than half a dozen banks in Dushanbe on December 3 was told that even the services of Unistream are no longer accessible. It is unclear when the situation will be resolved.

Staff at banks suggested that customers could send money by means of online wallets and that funds deposited in those accounts could be cashed out in Tajik banks. Systems for this to work nationwide in Tajikistan do not yet exist, however.

Money transfer companies have pleaded with the NBT to allow for a six-month postponement to further clarify the finer technical and regulatory details of the payment processing center that it has proposed.

But Asia-Plus news website cited a source at the regulator as saying that "the payment transfer companies have been given enough time to decide how to operate in future on the Tajik market."

Adding more confusion, the regulator said it had already reached arrangements with some companies – namely, Unistream, Western Union and Contact – to proceed with the idea of having all payments filtered through a clearing house in the NBT. This appeared to be contradicted by facts on the ground in Dushanbe, however.

In 2018, around $2.55 billion worth of remittances were transferred to Tajikistan. The amount in the first quarter of this year was $462 million.

Experts are concerned that if the problem with money transfer companies persists, it will likely lead to the resurgence of the practice of hawala, whereby money is sent to its recipient throughout informal brokers. This arrangement offers few certainties, can prove complicated – due to the difficulties implicit in getting hard cash across borders – and could prove more costly than the service now offered by money transfer companies.

This approach tended to prevail among Tajik migrants until the mid-2000s, prior to the development of the country’s money transfer industry.