The fuel business is largely controlled by a company belonging to Shamsullo Sohibov, a son-in-law of President Emomali Rahmon. 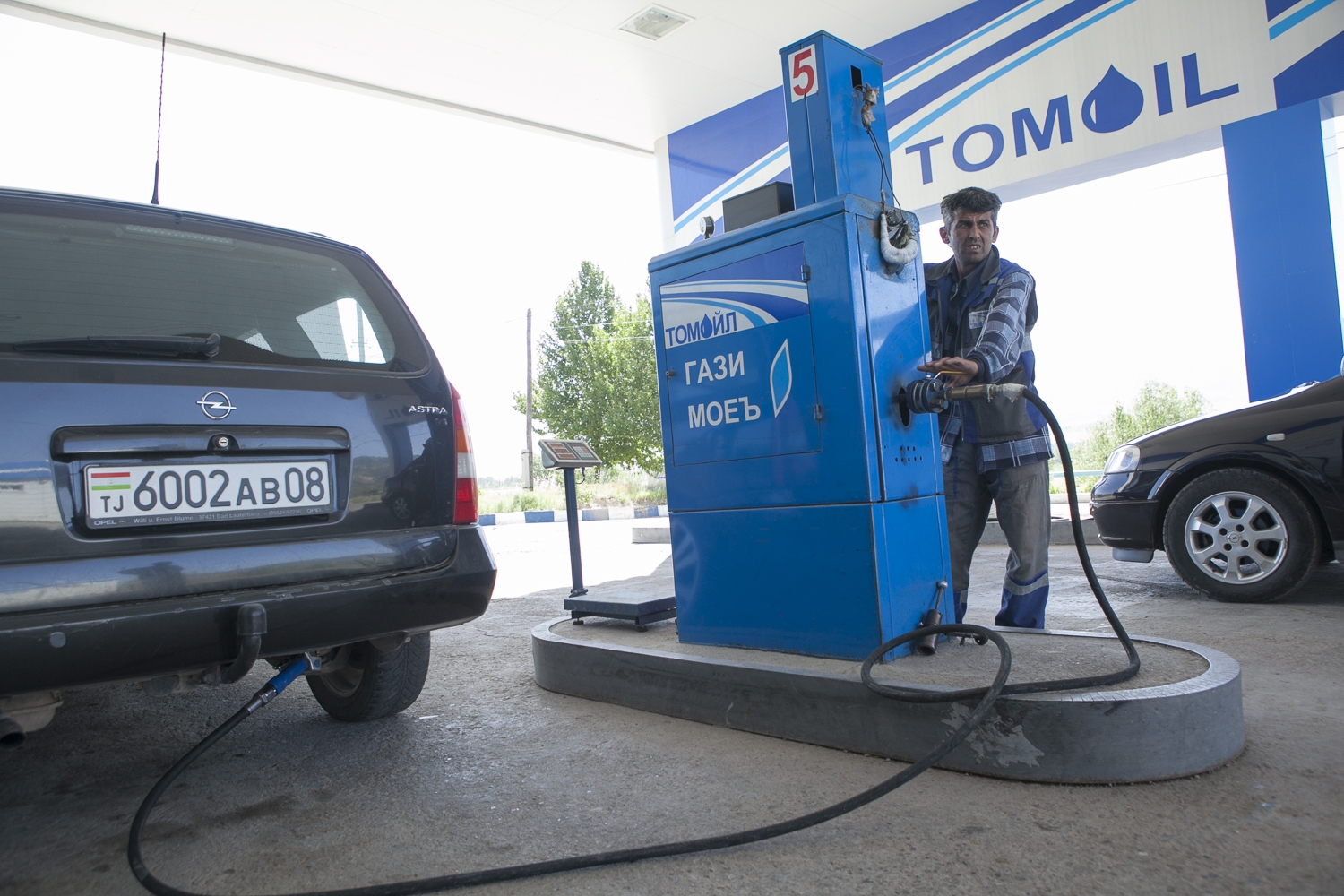 One of the most popular means to get around Tajikistan’s capital is the “three-somoni taxi,” named for the set price of the fare.

No more. It will be five-somoni taxis from now – the direct result of a recent dramatic spike in the cost of car fuel and an opaque fuel-import market dominated by a relative of the president.

The taxi business has been a lifeline for a huge number of Tajikistan’s unemployed, like Nozim Subhonov, 30. For the past year, Subhonov has been picking up a maximum of four people at a time in his Opel Vectra, charging 3 somoni ($0.32) to be carried along route number eight, a fixed path through Dushanbe.

“Because of the financial crisis I was fired from my last job, where I worked delivering groceries,” Subhonov, who provides for two children and his parents, told Eurasianet.

To save money, he converted his car to run on liquified gas, which costs less per unit traveled than petrol. Around 60 percent of drivers in Tajikistan use liquified gas to run their cars, according to the State Antimonopoly Service.

But the price of liquified gas has risen dramatically in recent weeks. After the middle of June, prices for gas in Dushanbe leapt by more than one-third, from 3.40 somoni per liter to around 4.90 somoni in mid-July. Petrol has followed suit, jumping from around 6.40 somoni to 8 somoni per liter.

Subhonov said this has forced drivers like him to hike their own prices.

“What is the point of me working if there is no profit for me in it?” he asked.

The impact has also been felt on travel between towns. Where a ride from Dushanbe to the country’s second city, Khujand, once cost around 80 somoni, now it is around 120 somoni. The rate of increase applies across the board.

According to official figures, around 85 percent of the 340 tons of liquified gas imported for motorists annually comes from Kazakhstan. The rest is from Russia.

Following the trail of fuel supplies is intensely complicated, however, as the business is opaque and malfeasance is said to abound.

In writing about the regional rise in prices for liquified gas, Argus, a publication that specializes in analyzing the global energy market, wrote in an emailed Russian-language bulletin dated June 20 that it had been caused by a slowdown of operations at the Kazakh-Chinese-run Zhanazhol gas processing plant near Aktobe in western Kazakhstan.

The price of gas at the Uzbek-Tajik border in June was recorded as rising by $140 per ton week-on-week, to $540, Argus reported in its bulletin without stating its source.

Those figures, which industry insiders have said may be set to grow further, are startling for a number of reasons.

The price at which bulk retailers of liquified gas in Kazakhstan, where Tajik traders source much of their fuel, are allowed to sell their product on the internal market is set in law at regular intervals. The current level is 38,700 tenge ($113) per ton. When it comes to selling to international buyers, negotiation is the name of the game.

Lawmakers in Kazakhstan have worried that this dynamic has created a strong incentive to export to nearby countries. But under changes to the rules set to go in place in Kazakhstan in January 2019, the bulk sale price of liquified gas will be allowed to float in line with market forces, reducing the incentive for export.

That could result in deficits and prices rising even further for consumers down the pike, in Tajikistan.

Even in the short term, the picture does not look reassuring.

A representative for a Tajikistan-based company dealing in the import and sale of hydrocarbon products told Eurasianet on condition of anonymity that the Zhanazhol plant’s suspension of deliveries to Tajikistan began on June 1 and is expected to end on July 15.

“Considering this situation, other Kazakh companies have sharply increased the cost of their exported gas. That is why the price has risen so sharply,” the source said.

Russia should be a competitive alternative given that the two countries have a standing agreement on the tariff-free trade of energy products, but in practice this appears to have little effect.

“Only a couple of Tajik companies and [Russia’s state-controlled] Gazpromneft can take advantage of this agreement,” the sale trading company source said.

More upward pressure was put on retail liquified gas prices by the rising cost of transportation. In April, Tajikistan’s national railway company increased the cost of carrying liquified gas and petrol into the northern Sughd region by around one-third. This revenue-raising move in effect penalizes those using the most direct route for importing fuel from places like Kazakhstan and Russia.

“The rise in cost of transportation, the tax burden and customs duties all have a negative effect on the price-formation of oil goods, and it is the consumer who suffers primarily,” the trading company representative said.

Market insiders expect the current volatility to diminish by the end of summer, but that it is unlikely that prices at the pump will return to former levels.

Tajikistan’s narrow and uncompetitive market is the elephant in the room. The fuel business is controlled for the large part by a company called Faroz, which belongs to Shamsullo Sohibov, a son-in-law of President Emomali Rahmon. The activities of this company have been subject of reporting by Eurasianet correspondents and, later, the Organized Crime and Corruption Reporting Project, or OCCRP.

But Faroz has denied it enjoys a near de facto monopoly. In a statement posted on Facebook on June 27, Faroz pointed out that there are 35 companies in Tajikistan that import and trade in fuel products.

And yet, as OCCRP has noted, Faroz in 2013 established a would-be lobbying entity called the Association of Oil and Liquefied Gas Importers. According to industry insiders cited by OCCRP, the lobby group actually acted as an intermediary with the authorities, so that only companies that somehow got into its good graces were granted the right to operate.

The cost of the now five-somoni taxis are just the tip of the iceberg.

Once the new fuel-prices play their way through the system, it will eventually lead to rises in the cost of basic staple goods, Alisher Safarov, an economist, told Eurasianet.

“Prices for groceries will go up, because you need transport to carry them around, and the cost of that has gone up. Any changes in the end will hit the consumer,” he said.

Tajikistan nets hundreds of millions from donors to build roads