The business holdings controlled by at least three of the Tajik president’s relatives are showing signs of distress. 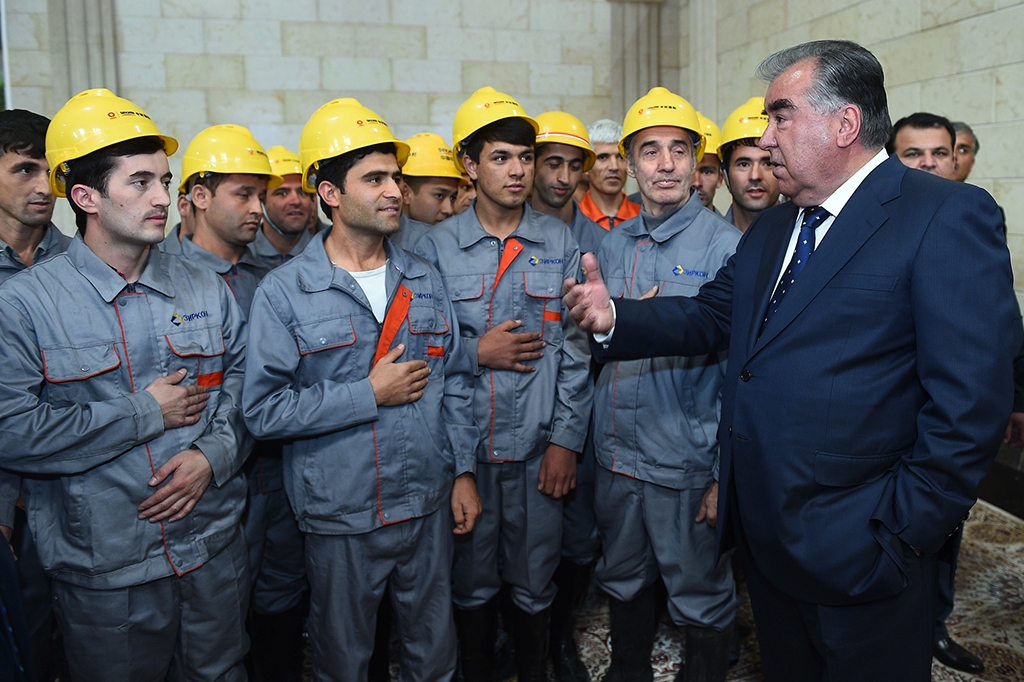 “Fellas, this is how to construct a building” (president.tj)

Beg Sabur, a relative by marriage of Tajikistan’s president who has gained notoriety by gutting the national telecommunications sectors, is selling off lucrative real estate.

This revelation, which was reported by Prague-based news website Akhbor on September 19, comes on the heels of a company controlled by a son-in-law of President Emomali Rahmon announcing that it was set for liquidation.

Akhbor cited its sources as saying that Sabur, whose son Ramza is married to one of Rahmon’s daughters, Zarina, is selling the palatial-style six-story building in Dushanbe at a below-market price of $500,000. The building was completed only two months ago and has been used as a hostel since that time.

This sudden fire sale has triggered much gossiping in Dushanbe. Since free media has been all but extinguished by the government, the scuttlebutt remains the primary source of would-be information for many Tajiks. One recent line of speculation has had it that Ramza has parted ways with Zarina, although Sabur has commented publicly to scotch that rumor.

Akhbor says the six-story complex is not the only thing Sabur’s family is in a hurry to offload.

The Minions children’s entertainment complex in the center of Dushanbe (named after the Pixar cartoon characters and owned by another of Sabur’s sons) shut its doors around six months ago and has now come under new management.

More grievously, construction of a 30-story headquarters for the state telecommunications service, an agency headed by Sabur, has been frozen for the best part of a year. The service is nominally a state entity, but it has in fact been run for years as a de facto privately controlled business. The new HQ was meant to be inaugurated on September 9, to mark Independence Day, but the premises are still less than half-built.

Sabur came in for oblique criticism in a World Bank report published in August that found overbearing regulation had led to deep stagnation in a once-promising telecoms sector. The measured language of the report failed, however, to fully describe the perverse state of affairs Sabur presides over. The state telecommunications service does not just regulate the industry – it also owns the national telephone services operator and has a monopoly over the provision of internet data.

Akhbor’s theory for this recent turn of events is that Sabur is in serious financial trouble.

The website also reported on how Rahmon last week visited the southern town of Kulob to inspect a 13-story apartment block built by a company belonging to Sabur. The president was reportedly not pleased with what he found.

“What the heck have you built here?” Rahmon is purported to have said. “With quality like this, the building will be knocked down by a gust of wind or the first rain.”

According to a well-placed Eurasianet source, Sabur relied on employees of the telecommunications service – rather than qualified construction workers – to do the labor, hence the shoddy result.

And while Akhbor does sometimes engage in relaying fanciful hearsay, its output has shown that it has robust and well-placed sources, a fact that lends some degree of credence to the account of Rahmon’s anger.

A major business holding controlled by yet another presidential relative is likewise showing signs of distress.

Talco, an aluminum producer and the country’s largest industrial concern, was by presidential decree in June converted from a state unitary enterprise into an open joint-stock company. Although the company is on paper, like the state telecommunications service, a government entity, it is widely understood to be controlled by Hasan Asadullozoda, the brother of Rahmon’s wife. The change of legal status at Talco will allow the company, if it wishes or needs, to sell stock and thereby raise funds.

Talco has seen better days. In 2007, a banner year, it produced around 419,000 tons of raw aluminum. Since then, output has plummeted, down to around 100,000 tons in 2018. Much of the plant’s production facilities were rendered nonfunctional by a nationwide power failure that occurred in October 2016.

Notwithstanding its difficulties, Talco earlier this month unveiled a $4 million mini-replica of Paris in Kulob, a town that has served as a breeding ground for much of the national elite since independence.

And last week, Faroz, a diversified holding company owned by a Rahmon son-in-law, Shamsullo Sohibov, announced it was set for liquidation.

“Due to the increase in the cost of servicing and supporting activities that require large and constant financing, the company has sustained financial damage and is finding it difficult to maintain them,” the company said in a statement.

It has since then posted a list of assets, mostly from its fuel supply and transportation businesses, available for purchase. Faroz’s recently opened water park and its Safed-Dara skiing complex are not up for sale, however.