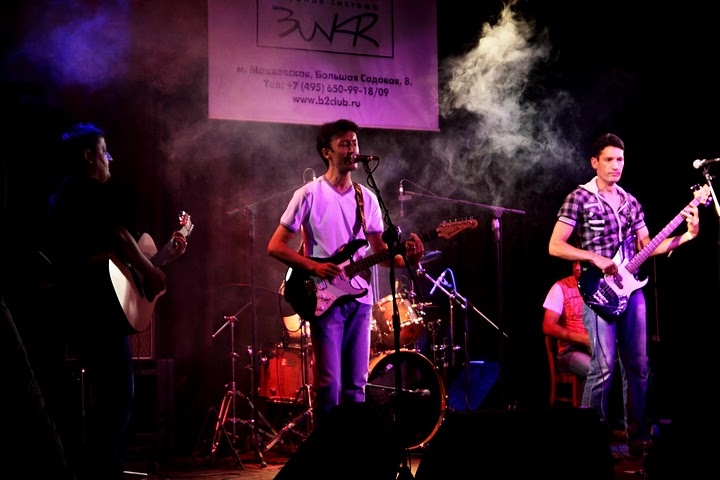 The Tajik band Parem performs at Moscow's B2 Club on July 24. (Photo: Parem)

Insults about a Tajik rock band tossed off on a Russian radio station have turned into a diplomatic incident.

The controversy dates back to July 24, when the Tajik band Parem performed at the prestigious B2 club in downtown Moscow. The next day, popular Russian radio personality Sergey Stillavin and his co-hosts poked fun of the musicians on state-controlled Radio Mayak. But after slamming the band’s repertoire, their discussion turned to “the dying culture in the republics of Central Asia.” They also derided the band members’ command of the Russian language.

А recording of the program made its way back to the musicians, and, later, to officials at Tajikistan’s Culture Ministry and Foreign Ministry. The ministries sent an official letter of complaint to the Russian State Broadcaster and the Russian Union of Journalists demanding apologies from the radio program’s hosts and the station’s managers.

The letter, signed by prominent Tajik journalists, claimed that Stillavin and his friends went far beyond the line of decency: they were making fun not only of the band, but of all Tajiks. The complainants especially took offense at Stillagin’s comments that the group played on a Sunday because “the Tajiks” could not afford a busier night; and that all of Tajikistan’s music lovers are now in Russia.

The letter, though, only fueled more ridicule from the radio host. “The situation might have looked funny, but the honor of a music band is being defended at the level of [national] ministries and the diplomatic corps,” Stillavin wrote on his blog. “The offended musicians have an informal influence on the government structures in the former Soviet republic.”

On August 24, allegedly under pressure from his supervisors, Stillavin apologized on air and read a letter from the musicians. But his insincerity was clear from the jokes he inserted between paragraphs. His remarks caused a new wave of anger on social networking sites such as Facebook, where a video of the session is being passed around.

Parem’s Olim Shironov says he is proud of “Tajikistanis” -- stressing the word that includes all “citizens of Tajikistan” regardless of ethnicity. “We are not troublemakers, but we shouldn’t tolerate such groundless attacks, especially when it concerns the image of Tajikistan and our culture, which is not mono-ethnic; on the contrary, it is multiethnic,” he told EurasiaNet.org.

The episode is helping to focus attention on the occasionally uneasy relationship between Tajik labor migrants and their Russian hosts. Many Tajiks working in Russia are either unable or too fearful to communicate frustrations over their treatment, says Oynihol Bobonazarova, director of the Perspective-Plus, a legal-support clinic in Dushanbe. The case could embolden other Tajiks to stand up for their rights.

“Being aware of their rights, these guys [band members] proved to be very smart; they’ve found support from the [Tajik] authorities. Regrettably, this is not the case with Tajik labor migrants, who have neither proper [Russian] language skills nor legal literacy,” Bobonazarova said.

In April 2010, after complaining to Moscow about a Russian television hit they say was demeaning of Tajiks, authorities in Dushanbe banned DVD sales of Nasha Russia (“Our Russia”). The sitcom features the foolish antics of two migrant workers who, though not explicitly identified by nationality, are clearly meant to be seen by viewers as Tajiks. Earlier, Tajik Labor Migrants, an advocacy group registered in Russia, asked the Russian Prosecutor General’s office to issue an injunction against the broadcasting of certain episodes that it says contributes to interethnic intolerance.

Though Radio Mayak’s Stillavin may seem a harmless jokester to many Russians, one Moscow-based observer affiliated with the federal government says broadcasting personalities are increasingly employing hurtful jokes to boost their own popularity. Intolerance, it seems, can be good for ratings.

“The radio jockeys have gone too far riding the wave of dirty jokes about illiterate guest workers from Central Asia. Nobody would make fun of ethnic Russians in Dushanbe for not being able to speak proper Tajik,” the Moscow observer said. “This is evidence of the narrow-mindedness in Russia’s so-called fashionable media society.”