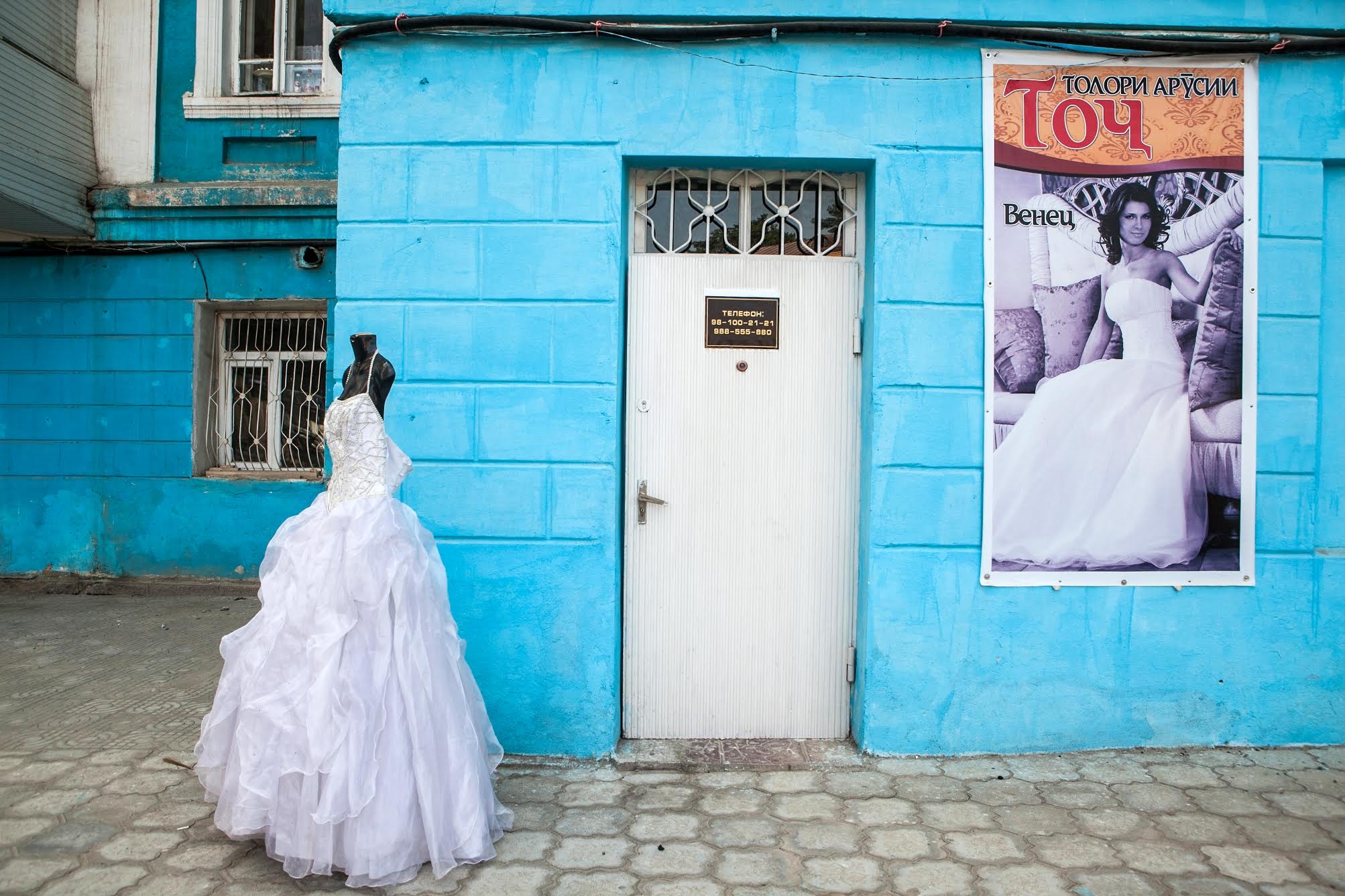 A wedding dress is on display outside a wedding shop in the Tajik capital, Dushanbe, in September 2012. The Tajik government is considering a bill that would require every couple to undergo a mandatory medical exam before getting married in order to stop relatives from marrying. Others in the conservative Central Asian country say that the possible legislation does not go far enough and that women must also be tested to prove their virginity. (Photo: David Trilling)

Aiming to prevent close relatives from marrying each other, officials in Tajikistan are considering legislation that would require couples to undergo a mandatory medical exam before tying the knot. The idea is to decrease the number of children born with debilitating illnesses and to address a burgeoning HIV crisis.

Some observers are raising privacy concerns about such testing, saying such legislation could provide opportunities for venal officials to solicit bribes and access intimate information. But others in this conservative country say the bill does not go far enough, and want women to be tested to prove their virginity. The debate has underscored the low quality of medical care in the former Soviet Union’s poorest country.

Under 2006 legislation, genetic and virginity tests are currently available free-of-charge in Tajikistan – but they are not mandatory. The push to mandate the exams comes after President Emomali Rahmon, in a January speech, instructed his government to ban consanguineous marriages – marriages between first cousins and other blood relations – which he blamed for causing the majority of disabilities among Tajik children.

Navruz Jafarov, the deputy minister for health and social welfare, who is part of a working group developing the bill, told EurasiaNet.org the tests are necessary to determine if a would-be bride and groom are too closely related to marry, and would thus help prevent births of children with developmental disabilities. He said the tests would also address the rise in HIV cases – which he attributes to migrant laborers bringing the virus home from Russia, as well as rising drug abuse – and other STDs. He said the presence of such diseases could also lead the state to forbid a marriage.

In a country where few citizens trust officials to act in their best interests, or underpaid doctors to work without demanding informal payments, many are suspicious about the motives for the testing. After all, it is already easy to buy one’s way around just about any rule.

“If the premarital check costs money, this would infringe on the constitutional rights of the population and increase … corruption in the country,” investigative journalist Muhayo Nozimova told EurasiaNet.org.

Nozimova added that if the state wants to stop relatives from marrying, the state must do more to educate people about the potential genetic hazards.

“It is necessary to prevent marriages among relatives and to explain to people that these lead not only to the birth of sick children but to cracks in family relations. That is to say, this should all take place through explanation,” Nozimova said.

The deputy head of the Justice Ministry’s Department of Civil Registry, Jaloliddin Rahimov, argued that testing would have considerable public benefits. People should “know what illnesses their partners have; some Tajiks have never in their life visited a clinic and do not know themselves if they have any diseases,” he said. He cited an example where a premarital examination prevented what he described as a marriage that was bound to be unhappy. A young girl went to the doctor and found she could not get pregnant. Her grief-stricken parents called off the marriage.

“Think about it: What a scandal there would have been for the family if the marriage had gone ahead! And again the question of divorce would have come up. So that premarital examination prevented a divorce. It is better for these issues to be discussed before the wedding, and if a guy wants to marry her as she is, he can make the choice before the wedding, not after,” Rahimov told EurasiaNet.org.

For 30-year-old Dushanbe resident Manizha Negmatullozoda, such testing would enable official to pry into areas where they do not belong. She cited other recent bans to argue Tajikistan’s state paternalism is going too far.

“You do not see people in developed countries being forced into medical examinations before marriage. There couples get the body ready before giving birth. They go through all the tests possible. And what happens to us here? Everywhere you go you are watched; there is a push to introduce a law on mandatory pre-marriage testing; you have got to follow their orders – dress like they tell you, name your child and so forth,” said Negmatullozoda, referring to a draft bill that would ban Muslim-sounding names and to recent raids on shops selling Muslim clothing.

Guljahon Bobosodiqova, a member of the working group drafting the legislation, acknowledged that officials could do more to address public concerns. Indeed, rumors about the bill have fanned concerns that the government is proposing to test brides for their virginity. That is not true, say three people working on the bill, including Bobosodiqova.

“The test for a girl’s virginity must be taken at the request of the couple; it is not mandatory,” said Jafarov of the Health Ministry.

Conservative families carry out their own informal “virginity tests” on the morning after a wedding, quizzing the groom or inspecting the bed sheets. In January, the Republican Center of Forensic Medicine said it daily treats morally and physically abused women accused of failing the test on their wedding night, Asia-Plus reported at the time. The center estimated 78 percent of women who seek a test before their wedding wish to prove their virginity under pressure from their grooms or nosy relatives.

Rahimov of the Justice Ministry’s registry department also maintains the working group is not discussing virginity tests. But he reveals an attitude that worries human rights activists. “If a girl has seen life before marriage, there should be transparency and a future husband should know about it,” Rahimov said.