Tajikistan nets hundreds of millions from donors to build roads 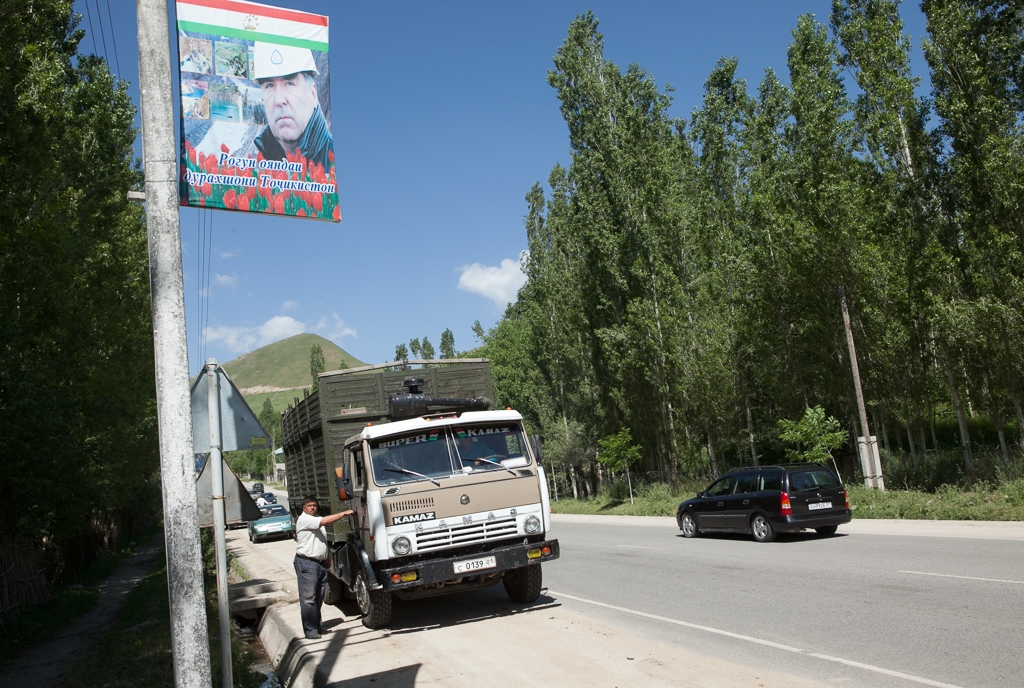 The ADB is paying to replace a stretch of road above Obigarm that will be flooded by Tajikistan's mega Roghun dam. (Eurasianet)

One billboard dotted around Tajikistan declares a sentiment that the government claims is a key priority. “Roads Draw Hearts Closer,” it reads.

That notwithstanding, a large and expensive dam project being funded by squeezing taxpayers dry is flooding one of the country’s most important highways.

And the government is relying on foreign donors to step in and build a replacement.

On June 7, President Emomali Rahmon traveled to the Nurobod district to oversee the start of construction of a mountainous stretch of road linking the district to the town of Obigarm.

A 30-kilometer stretch replacing the part of the M41 highway being inundated as a result of the construction of the Roghun hydropower dam is being funded in part with a $110 million grant from the Asian Development Bank. Another $40 million will come in the form of a loan from the OPEC Fund for International Development. The Tajik government will spend $28 million of its own money.

Work is due for completion no later than November 2023.

“The road is part of important international corridors, while also providing critical access to economic opportunities and social services for local communities,” Shanny Campbell, the ADB’s country director for Tajikistan, said in an emailed statement.

The only alternative route for joining the south of the country to Kyrgyzstan would have entailed a detour of several hundred kilometers.

A second stage of the project – 44 kilometers of highway and 45 kilometers of local roads – is being funded with $150 million of credit from the European Bank for Reconstruction and Development. And then a third stage – which will involve installing a 760-meter bridge – is being paid for with $50 million provided by the Beijing-based Asian Infrastructure Investment Bank, or AIIB, according to the Tajik presidential administration.

Although donors often pick up the bill for roadbuilding, it is the Tajik government that sets the agenda, and often according to arbitrary and suspicious criteria.

The road from the capital, Dushanbe, to President Rahmon’s home district, Danghara, is by and large pleasantly smooth, while much of the drive eastward from there to the Pamirs is along disastrously crumbling and rutted roads – a “continuous earthquake” goes the bitter wisecrack for those forced to do the trip regularly.

Avalanche galleries being built on the highway from Dushanbe to the northern city of Khujand are being financed with almost $5 million in grants from the government of Pakistan. The highway itself can only be accessed by motorists who pay a toll collected by a company called Innovative Road Solutions, which is registered in the British Virgin Islands. Officials have historically described the company’s ownership structure as a “trade secret,” although it is widely understood to be controlled by one of Rahmon’s sons-in-law.

Other road projects of note include the Khujand-Isfara route in the north of the country, completed in 2018. The World Bank provided $38 million in credit and $6.8 million as a grant toward the overall $54 million bill.

Another $90 million undertaking to refurbish and build 58 kilometers of road in the direction of the Pamirs, from Kulob to Kalai-Khum, is being mostly financed with loans from a dizzying array of Middle Eastern partners: the Saudi-based Islamic Development Bank ($14 million), the Saudi Fund for Development ($30 million), the Kuwait Fund for Arab Economic Development ($25.5 million) and the OPEC Fund for International Development ($10 million). The Tajik government has pitched in $10 million. A meager $628,000 had been spent on executing this project at last reporting, however.

As for the Pamirs themselves, hope there rests on China. Dushanbe is waiting for a large chunk of cash from China for the overhaul of the road from Kalai-Khum all the way to the Pamir town of Vanj. Reported estimates of how much Beijing might gift Tajikistan to this end vary from $186 million to $226 million. And it is not yet known what China will expect in return.