The man complained that women and students were being forced to rehearse for parades. 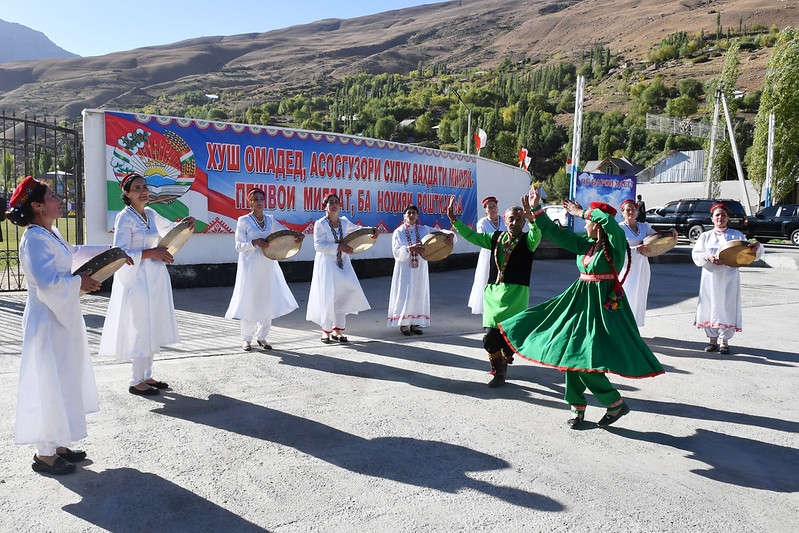 Dance, then, wherever you may be: A performance for the visiting president. (Photo: Presidential press service)

A man in eastern Tajikistan has been subjected to a public shaming campaign and described by local authorities as a “traitor to the nation” after he made a mild criticism of preparations for a planned official visit from the president.

Officials in the Gorno-Badakhshan Autonomous Region, or GBAO, have also requested that police take action against Maksud Gayesov.

Gayesov, a resident of the GBAO capital, Khorog, made the offending remarks on his Facebook account on September 22. In the post, he expressed irritation over the fact that students and women in Khorog were being forced to rehearse for parades to be held in honor of President Emomali Rahmon, who has since embarked on his tour of the Pamiri regions of the country.

“What kind of man allows his wife to take part in this kind of disgrace, not to speak about brothers and fathers letting their sisters and daughters [take part],” Gayesov wrote. “I am so sorry for you women that your men will not come to your defense.”

The preparations of the kind taking place in Khorog are extremely familiar to people all over Tajikistan. It is common for government workers, university students and even young children to be kept away from their place of work or study over days, weeks or even months as they rehearse song-and-dance routines or poetry recitals ahead of a visit by Rahmon.

While criticism of the national leadership is muted in most of the country, people in GBAO have customarily prided themselves on some token level of independence from the central authorities.

Gayesov’s predicament, however, indicates that there are limits even in remote GBAO.

Following the posting on Facebook, the region’s press service said in a public statement that Gayesov was writing his messages at the instigation of “foreign masters.”

“It is worth noting that preparing for a visit from the country’s leader with dances and songs is a requisite aspect of Tajik culture,” the press service, before noting that law enforcement agencies should investigate the activities of what it termed the destructive utterances of a “traitor to the nation.”

The press service did not state what piece of legislation they believed Gayesov had violated.

Gayesov has received solidarity from his community, not least as a result of the efforts he made last year in helping mitigate the fallout of the COVID-19 outbreak among the local population. As the virus was spreading, he was particularly active in collecting donations and enlisting support from fellow Pamiris based abroad to source medical supplies.

“We do not live in the time of Stalin, so it is not like you can label anybody you like as an enemy of the people. Officials of Khorog, you should be ashamed of yourselves,” one Khorog resident wrote under the GBAO’s press service statement on Facebook.