The internet spigot is wholly controlled by the government, which blocks sites at will. 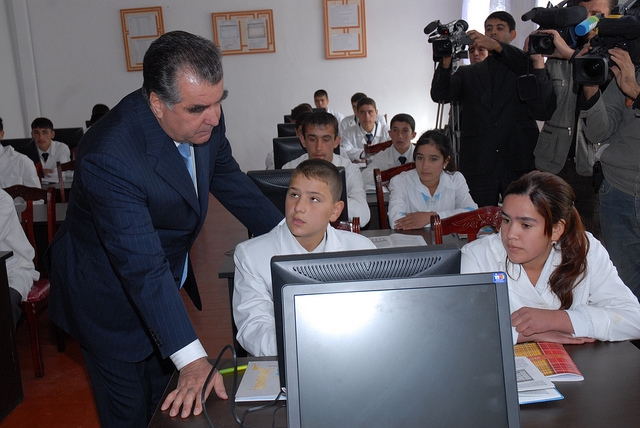 "Hey kids, what you looking at there?": Authorities keep an eye on the internet. (Photo: Presidential administration Flickr account)

Tajikistan is taking a leaf out of nearby Kazakhstan’s book by restricting access to the internet while exiled opposition politicians seek to spread their message in online addresses.

The most recent example of this ham-fisted censorship policy occurred this week when Muhiddin Kabiri held his latest live YouTube broadcast. The show was dedicated to the developing situation with Netherlands-based activist Sharofiddin Gadoyev, who was allegedly abducted and spirited away to Tajikistan earlier this month.

Internet providers insist that these collapses of service occur because of factors outside their control. All data entering Tajikistan is said to pass through a government-controlled spigot called the Unified Electronic Communications Switching Center, or EKTs in its commonly deployed Russian-language acronym. That system operates under the aegis of the communications service, which is run by Beg Sabur (né Beg Zukhurov), a relative of the president by marriage.

For many people, the quality of the internet signal only returned more or less to normal in the early morning following Kabiri’s broadcast on the evening of February 21. As of the end of February 23, access was restored to the most popular social media websites, although many news websites were blocked.

Even when the censorship is not in place, things are grim.

Going by anecdotal accounts, Tajikistan appears in recent months to have leapfrogged Turkmenistan in the low-internet-speeds stakes. And Tajik authorities are seemingly getting better at counteracting VPNs, the proxy server technique used by many people to circumvent bans on websites.

Restricting access to the internet is a method regularly deployed in Tajikistan to prevent the dissemination of what the government deems politically sensitive information or commentary. On occasion, the censorship is localized. Last year, after people emerged onto the streets in the Gorno-Badakhshan Autonomous Region in protest at a weeks-long security operation that residents said was making their lives miserable, internet connections went down in the area for at least a week.

Major changes effected last year have made the job of online censorship much easier. Starting in 2018, authorities deprived local fixed-lined and mobile service providers of the right to buy data traffic from neighboring countries. They cited security as grounds for the prohibition. ISPs now buy data from the EKTs, in effecting handing this body complete control over what internet users in Tajikistan can see.

Since Kabiri holds his YouTube talks once every two weeks, people are now going to have to resign themselves to a regular interruption of service.

Fans of the internet in Kazakhstan will sympathize. Since around last March, a noticeable slowdown of the internet has at times become a daily evening occurrence there. That has been blamed on Facebook broadcasts produced by Europe-based anti-government agitator Mukhtar Ablyazov, who uses online platforms to inveigh against President Nursultan Nazarbayev and those around him.