Several bodies were swiftly buried before they could be viewed by relatives. 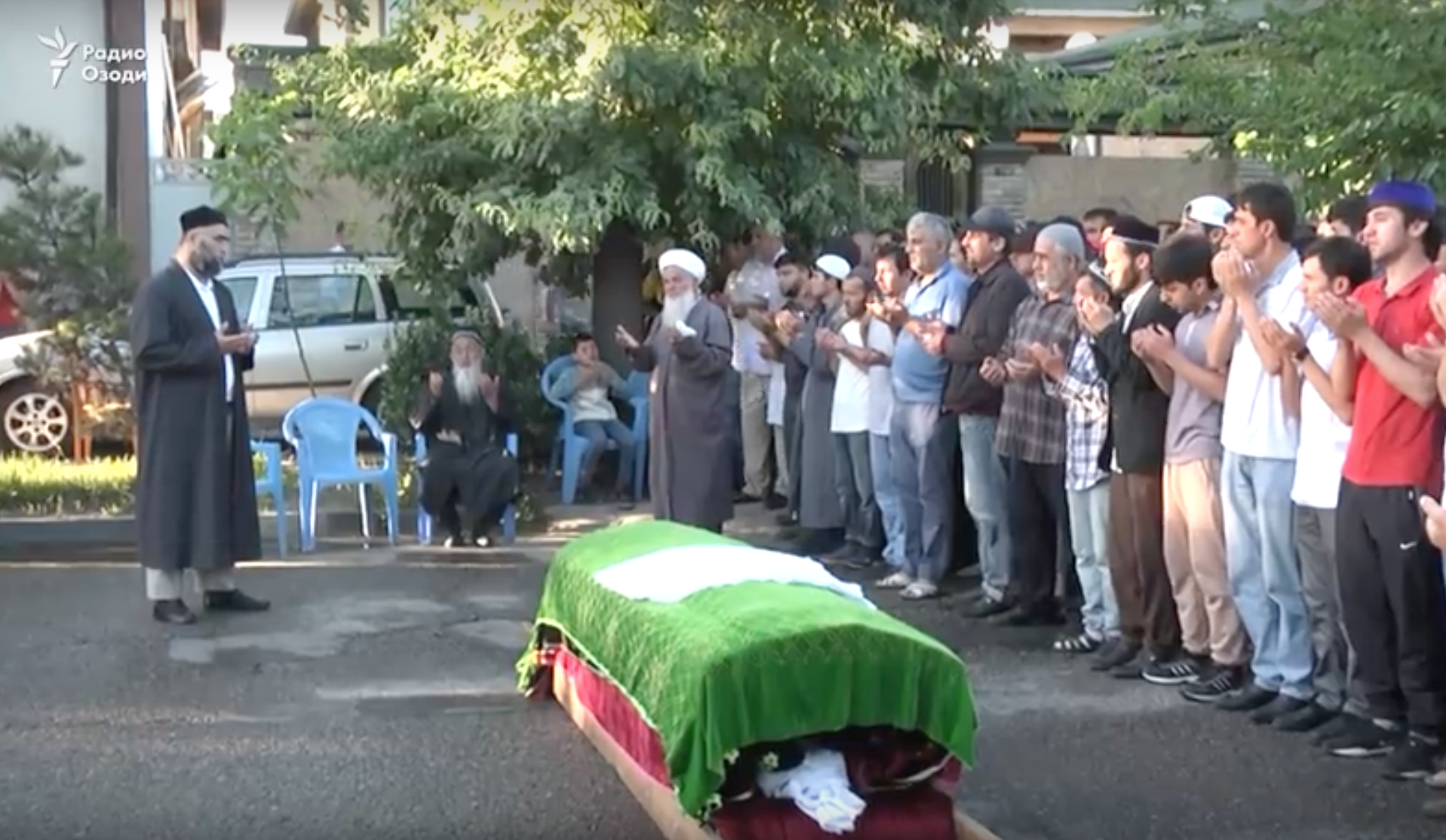 Screenshot from a news report by Radio Ozodi about the funeral of Abduusattor Karimov. (Photo: Radio Ozodi)

A banned opposition party in Tajikistan says that the government may be trying to cover up evidence that there is more to this past weekend’s bloodshed at a major penitentiary than what has been claimed in the state’s account.

Officials pinned the May 19 unrest at Kirpichniy penitentiary, in which they say three staff and 29 inmates were killed, on prisoners affiliated with the Islamic State group. Several of the people killed were prominent members of the Islamic Renaissance Party of Tajikistan, or IRPT, which has been subjected to relentless harassment by the government since it was proscribed in 2015.

The IRPT on May 21 said in a report on its Payom website that the only body that the authorities have agreed to hand over to relatives — that of Abduusattor Karimov, a member of the IRPT’s supreme political council — appeared to bear signs of gunshot wounds to the head. Officials say Karimov was summarily executed by Islamic State militants serving sentences in the same prison, which is situated near Vahdat, a town around 15 kilometers from the capital.

Neither claim could be subjected to independent scrutiny.

The same Payom report claims that hematomas along Karimov’s back indicate that he may have been stabbed repeatedly with a blunt object before his death. Payom published photos of Karimov wrapped in a bloodied white sheet. While the same images show signs of severe damage to the back of the head, what can be see of Karimov gives no indication that he was struck in the face.

Karimov was in 2016 sentenced to 26 years in prison for alleged involvement in a coup attempt.

The body of another IRPT member killed at Kirpichniy — party founder Said Kiemitdin Gozi — was buried without ceremony by the government. Gozi’s family were denied the opportunity to view the body and perform Islamic burial rituals.

The IRPT has said that it believes government assertions about Islamic State culpability for those deaths may be aimed at bolstering claims that it was the militant group that was responsible for the entire incident.

The Islamic State group is not known to have issued a public statement about what happened at Kirpichniy.

Temur Varki, a spokesman for the Europe-based opposition movement National Alliance of Tajikistan, has said that his group is now conducting its own investigation.

“The authorities have published conflicting reports about how it all happened and who, according to their versions, is guilty of murder. There are many logical inconsistencies and outright lies. We are trying to create an objective account and make it known internationally,” he said.

The IRPT has urged that international organizations, such as the International Committee of the Red Cross, also run their own probes.

The obfuscation has extended to other fatalities in Kirpichniy.

Prague-based website Akhbor reported that one of the people killed, 20-year-old Behruz Gulmorod — the son of Gulmorod Khalimov, a former Tajik police officer who became high-ranking Islamic State commander — was yet another person buried without rites. Relatives were denied the chance to view his body.

RFE/RL’s Tajik service, Ozodi, whose correspondents reached out to family members, reported on how others got the same treatment.

Farkhod Makhanov told Ozodi that the family learned about the burial of his brother, Alimurod, who was serving a sentence on terrorism charges, while they were waiting near the prison for his body to be handed over. Officials declined to detail how Alimurod had been killed, Farkhod Makhanov said.

“We met with Alimurod two weeks ago. He complained about the tough conditions in prison and about his physical ailments. He said that they were made to do roll-calls nine times daily and he asked me to take care of his three children,” Makhanov said.

Although much remains to be learned about events at the Kirpichniy prison, which holds around 1,500 inmates, considerable damage has been done in rapidly cementing the official narrative internationally.

Outlets like Reuters news agency relayed the government account with little skepticism or background about the Tajik government’s chronic indulgence in purveying falsehoods and inconsistent information.